The mortgage-servicing company narrowed its losses but still faces plenty of regulatory challenges.

Mortgage servicing company Ocwen Financial (OCN -1.25%) has had to deal with extensive challenges recently. Just as it thought it had nearly resolved many of the regulatory issues that had plagued it for a long time, Ocwen got thrown back into the fray with more government scrutiny. All the while, the company has tried to keep operating its business efficiently so as to move back toward profitability and to take advantage of opportunities in the space.

Coming into Wednesday's second-quarter financial report, Ocwen investors wanted to see the company make progress toward eliminating red ink, but they were realistic in their assessment of the pace of its recovery efforts. Ocwen's results were far from ideal, but they nevertheless marked hard-earned milestones in the mortgage servicer's long-term journey. Let's look more closely at Ocwen Financial and how its latest results relate to what's happening with the business. 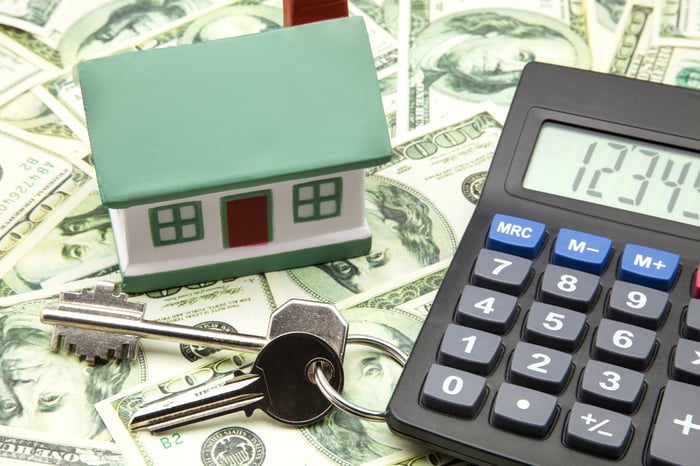 Ocwen Financial's second-quarter results reflected the ongoing struggles for the mortgage servicer. Revenue plunged 17% to $311.3 million, but that drop wasn't as severe as the 21% decline that most investors were expecting. Ocwen lost $44.5 million, but that was down by half from the year-earlier quarter. The resulting loss of $0.36 per share was worse than the consensus forecast for $0.19 per share in red ink, but after making adjustments for settlement expenses and other extraordinary items, Ocwen boasted positive pre-tax adjusted income for the quarter.

Looking more closely at Ocwen's numbers, the servicing segment was the key winner in the quarter. Segment revenue was down in line with the company's overall sales drop, but a substantial decline in expenses helped the unit reverse a year-earlier pre-tax loss and instead post a segment profit of $9.2 million. The improvement came despite a big drop in fees from the Home Affordable Modification Program.

On the other end of the spectrum, the lending segment showed signs of deterioration, with a decline in revenue and a rise in expenses combining to produce an overall pre-tax loss for the segment. Total mortgage lending volume was down by more than a quarter on a year-over-year basis, with Ocwen's decision to exit the forward lending correspondent business resulting in a 70% hit in that specialty. Forward lending retail volume nearly doubled from year-ago levels, however, and reverse lending volume climbed by a third.

Ocwen's fundamental business was mixed. Only 11,000 modifications were completed during the quarter, down roughly 40% from the first quarter of 2017, and prepayment rates rose slightly to 15%. Yet credit quality metrics improved, with delinquencies falling from 11.2% at the end of 2016 to 9.6% as of June. Loss mitigation efforts were essential in helping to improve delinquency rates.

CEO Ron Faris was measured in his comments about Ocwen's results. "Despite the recent regulatory setbacks, we made progress during the second quarter on a number of fronts," Faris said. Citing strategic moves, legal settlements, and cost-cutting efforts, the CEO believes that the future holds plenty of promise for Ocwen.

In particular, Ocwen's newly signed deal with New Residential Investment (RITM 0.68%) has important implications. As anticipated, the final version of the deal involved the transfer of mortgage servicing rights on roughly $110 billion from Ocwen to New Residential, with Ocwen entering into a subservicing agreement to continue to provide services to mortgage borrowers. The slightly scaled-down deal will have New Residential pay as much as $400 million for the servicing rights, and it took a 4.9% stake in Ocwen, paying $2.29 per share for roughly 6.075 million shares and spending a total of just under $14 million. Faris believes that the deal will "extend and build upon a mutually beneficial relationship" between the two companies.

Ocwen investors seemed pleased with the results, and the stock climbed 2% at midday during the trading session following the announcement. The company has a long way to go before all of its problems are resolved, but Ocwen still seems to be taking steps forward to deal with issues and find growth opportunities where it can.