Brian Stoffel, Rich Duprey, and Brian Feroldi
(TMFCheesehead)
Author Bio
Brian Stoffel has been a Fool since 2008, and a financial journalist for The Motley Fool since 2010. He tends to follow the investment strategies of Fool co-founder David Gardner, looking for the most innovative companies driving positive change for the future. He also mixes in risk-management strategies he's learned from Nassim Nicholas Taleb. Follow @TMFStoffel
Follow @TMFStoffel

We don't often find ourselves hoping for stocks that we like -- or own -- to fall. But all of us have a price that's too high to pay, and three of our Foolish investors have identified stocks that they wouldn't mind taking a tumble, so that they can finally buy shares.

Of course, this is a double-edged sword: If the fall is caused by something that breaks the fundamental thesis behind owning shares, then all is lost. But our contributors have all identified scenarios in which the price could fall and they'd still want to buy shares of MercadoLibre (NASDAQ:MELI), Align Technology (NASDAQ:ALGN), or Diageo (NYSE:DEO). 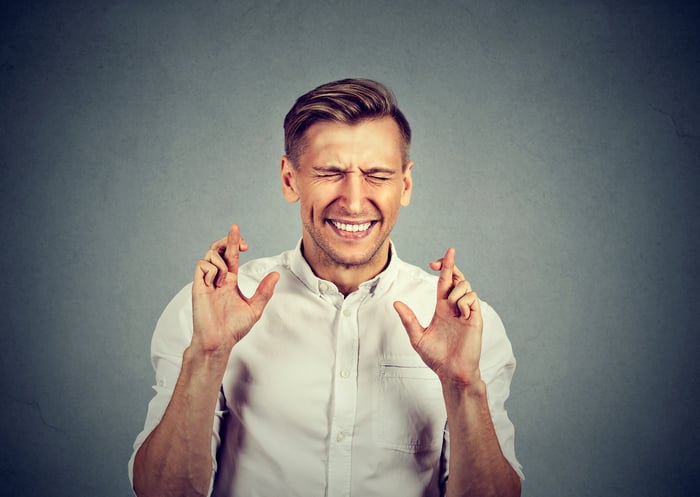 We're praying for shares to fall -- but we don't want them to fall because the company is busted. Image source: Getty Images.

Brian Stoffel (MercadoLibre): Few companies have all the things I look for in an investment: a mission-driven founder/CEO with skin in the game, a wide and growing moat, evidence of multiple futures, and a rock-solid balance sheet. But MercadoLibre -- a leading e-commerce and payment player in Latin America -- hits all those notes:

Add all of these factors together, and you have a stock I'm itching to buy again. Already, it accounts for over 4% of my real-life holdings, but I'm looking to add more. Today's price of 53 times free cash flow is a bit too rich for me, and I know that geopolitical volatility could easily send shares down at any time. When that time hits, I'll be waiting.

A premium portfolio at a premium price

Rich Duprey (Diageo): Distiller Diageo is trading at an all-time high, as drinkers continue to trade up to premium and super-premium brands.

In its just-reported quarter, organic growth in North America, Diageo's largest and most profitable market, grew 3% year over year. Whiskey brands such as Crown Royal and Bulleit enjoyed strong sales growth and market share gains for the period, helping to drive the segment higher. North American whiskey accounts for 9% of Diageo's net sales, and it grew 11% for the year. Its high-end tequila Don Julio grew net sales 20%, continuing to build on the momentum carrying over from last year, while Tanqueray gin and Baileys grew net sales and generated market share gains in their respective categories.

It is the rise of such super-premium spirits that led Diageo to drop $1 billion on George Clooney's Casamigos tequila. Although it has few sales in the U.S. and virtually nothing internationally, the distiller is banking on the movie star's name recognition to make it into a global brand. While Diageo paid only $700 million upfront, with the balance is reserved for when it hits certain performance targets, it's a steep price to pay even in a rising spirits market. The total price is a third of what Diageo was willing to pay for the Jose Cuervo brand family only a few years ago.

While the distiller probably was a bit starstruck, it doesn't change its overall prospects, which is probably why the market has bid its stock ever higher. Although it trades at 22 times earnings and 18 times next year's estimates, it also is valued at more than twice its sales and 57 times its free cash flow. Particularly after the bump it got after earnings, which pushed the stock up 25% in 2017, it's a bit pricey. If its stock pulls back, however, it would be a premium name that an investor could pour into a portfolio.

An alternative to metal braces

Brian Feroldi (Align Technology): Walk around any middle school in America and you're bound to see scores of kids with a mouthful of metal. That's because teeth misalignment is a common problem, and metal braces have been the go-to fix for decades. However, there are plenty of drawbacks to using metal braces, which dissuades many people from getting them.

That's where Align Technology comes in. The company developed the Invisalign system, which uses a series of clear aligners to fix a wide range of dental problems. Since the aligners are nearly invisible to others and can be temporarily removed by the user, they're a highly attractive alternative to braces. In response, demand from consumers and orthodontists alike has been huge, and Align's stock has been red-hot. 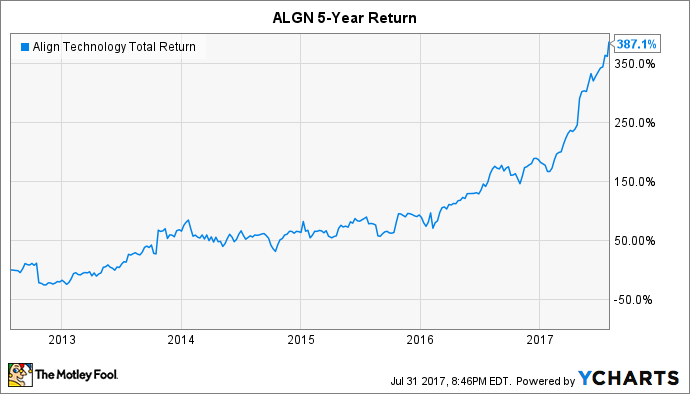 Despite the run, I still see plenty of reasons to be bullish. Invisalign's overall market share is only about 10%, so there's ample room for growth in the United States. In addition, the company is awaiting FDA approval for its next-generation product that will be able to treat new types of dental problems. A thumbs-up will further expand its addressable market. Finally, international expansion is going well and remains a huge long-term opportunity for the business.

The only knock against Align Technology is that its stock is expensive. Shares are trading around 62 times trailing earnings, which I think is a tad bit too pricey for a company that is "only" expected to grow profits about 23% annually over the next five years. That's why I'm hoping for a sell-off so I can pick up a few shares of this wonderful business at a discount.