Wall Street celebrated another milestone on Wednesday, as the Dow Jones Industrials closed above the 22,000 mark for the first time ever. Helping to pull the average higher were gains related to favorable quarterly results from the stock market's largest company. Yet the majority of the Dow's 30 stocks actually posted declines today, and other major benchmarks finished very close to unchanged as sentiment across the market was quite mixed. Some individual companies reported particularly bad news that sent their shares plunging. Flotek Industries (NYSE:FTK), Coherent (NASDAQ:COHR), and National CineMedia (NASDAQ:NCMI) were among the worst performers on the day. Below, we'll look more closely at these stocks to tell you why they did so poorly.

Shares of Flotek Industries plunged 34% in the wake of a poor second-quarter financial report. The chemical company with considerable exposure to the energy industry said that revenue gains were weaker than most had expected, and higher costs related to consumer and industrial technologies prevented Flotek from earning as much as investors had wanted to see. Falling crude oil prices have made times tough for companies across the energy sector, but even when oil seemed to be back on the upswing, Flotek in particular has had to deal with the failure of some of its most innovative products to get as much demand from customers as the company would like. Unless that happens soon, Flotek might well miss out even if the broader energy arena continues to rebound. 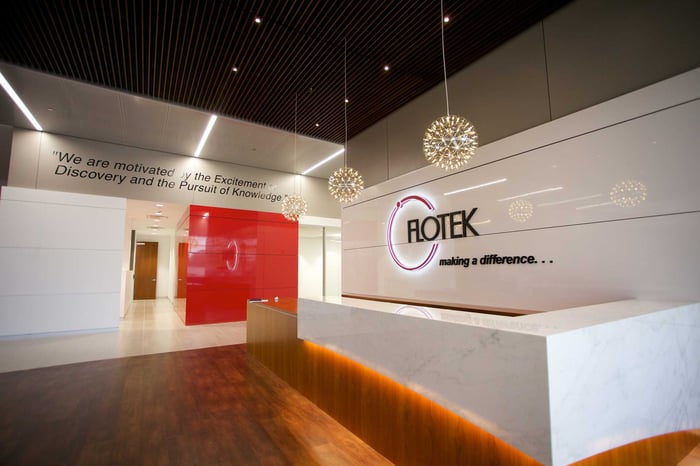 Laser maker Coherent's stock dropped nearly 22% after the company reported its fiscal third-quarter financial results. The company said that net sales more than doubled from year-ago levels, more than tripling its adjusted net income over the same time frame. Yet most of those impressive numbers came from the acquisition of industry peer Rofin-Sinar late last year, and with the stock having nearly tripled just since last October, most shareholders apparently wanted even better results from the laser maker. CEO John Ambroseo was optimistic about Coherent's future prospects, with strong demand for fiber lasers and equipment used to create flat panel displays and organic light-emitting diodes. Yet even with a full pipeline that will prompt expansion, Coherent wasn't able to satisfy investors in the company.

National CineMedia has a dark day

Finally, shares of National CineMedia lost 18%. The specialist in movie theater advertising suffered collateral damage from poor performance from its theater-operator parent company today, which included a sharp shortfall in revenue due to weak traffic figures and unfavorable box office figures. Investors have known for a long time that home-entertainment options were gaining favor over going out to theaters, but the extent of the decline has been surprising to some. Despite capital spending from traditional theater operators to give moviegoers a better experience, if audiences don't show up, then National CineMedia won't be able to get its clients to keep spending on advertising.