Last quarter, Apple's (NASDAQ:AAPL) long-suffering iPad business did something magical: It returned to growth after what seemed like an endless streak of both unit and revenue declines.

Unit growth was quite impressive, at 15% year over year, although revenue growth was just 2%, as the unit growth appears to have been driven by the introduction of the low-cost 9.7-inch iPad. 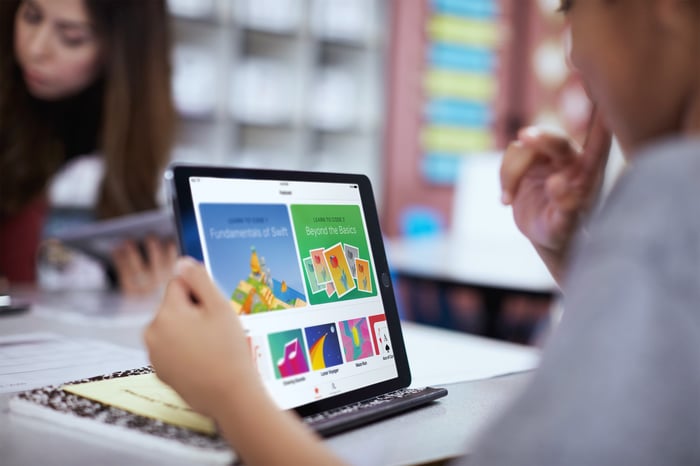 On the company's conference call accompanying its financial results, management talked quite a bit about the iPad business.

Here are three key things from that discussion that I think investors should know.

CEO Tim Cook said on the call that the iPad business enjoyed "broad-based growth in units, revenue, and market share."

"iPad sales were up 15% year over year and grew across all of our geographic segments," he added.

The comment vis-a-vis growth across all geographic segments was interesting because back in Apple's fiscal second quarter, the company reported iPad segment growth in the U.S. and "revenue growth worldwide for [Apple's] 9.7-inch and larger iPads over the last four quarters."

In fiscal second quarter, the first glimmers of hope for the iPad segment emerged, and in fiscal third quarter, the iPad showed an unequivocal return to revenue and unit growth.

Furthermore, Cook says that Apple "achieved [its] highest global market share in over four years based on [research firm] IDC's latest estimate of tablet market results for the June quarter."

Citing data from NPD, he said that "iPad had 55% share of the U.S. tablet market in the month of June, including 8 of the 10 best-selling tablets."

Now, as investors are likely aware, Apple doesn't compete across the entire spectrum of tablets; it competes in the market for tablets priced at $329 and up. "Among tablets priced over $200, iPad's share was 89%," Maestri said about iPad's share in the U.S.

So, it's quite clear that Apple's tablet revenue share is quite a bit higher than its pure unit share due to the much higher and typical average selling prices of iPad products (even Apple's so-called "low-cost" 9.7-inch iPad, which starts at $329) relative to competing devices.

One area that the iPad originally found success in was the education market. However, in recent years, iPad has faced significant competition from low-cost notebooks (particularly from Chromebooks, which are low-cost notebook computers that run the free Chrome OS, which helps to drive down system prices due to the lack of a need for a pricey Windows license).

It would seem, though, that Apple has found its footing in this battle. Cook said on the call that its "iPad results were especially strong in the U.S. education market, where sales were up 32% year over year to 1 million units."

It's very likely that the more affordable price point of the new 9.7-inch iPad helped Apple quite a lot in growing its sales into the education market.