After the decline in revenue and earnings in the prior quarter, Holly Energy Partners' (NYSE:HEP) second-quarter earnings were back on the right track. The pipeline company didn't suffer the same operational issues as it did last quarter, and it benefited from the addition of its new Woods Cross refining assets. 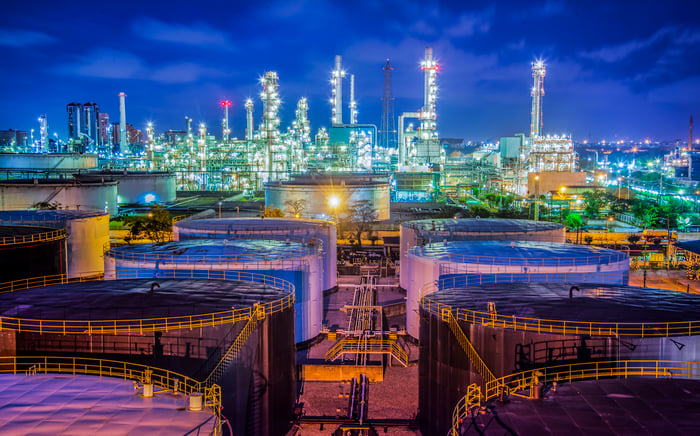 First-quarter results were a bit of an aberration. First, the company had an outage for its Salt Lake City crude pipeline, and parent organization HollyFrontier (NYSE:HFC) had part of its Navajo refinery complex shut down for turnaround work. Also, there was a one-time charge related to the early extinguishment of debt. These things put a dent in net income.

All of these issues were resolved in the prior quarter and did not affect the most recent results, which led to increased distributable cash flow and earnings per share. The higher amount of cash coming in the door was enough to keep the company's distribution coverage ratio just above 1.0 times after management's decision to raise its quarterly payout by 8.1% compared to the prior year.

Looking at Holly's revenue by business segment, the significant change over the previous year was the addition of the Woods Cross refining units at HollyFrontier's Salt Lake City refinery. Its crude pipeline revenue was negatively affected by a decreased amount of recognized revenue for the quarter from shippers not meeting minimum volume commitments. Holly will recognize that revenue at a later date if either the customer uses that payment for shipments above its guaranteed pipe space or if the shipping rights expire under the contractual make-up period.

On the company's conference call, CEO George Damiris highlighted that operations so far this year have been adversely impacted by maintenance work at HollyFronter, but that won't be as much of an issue in the second half of the year.

[W]ith most of HollyFrontier's annual maintenance completed in the first quarter, we remain optimistic about our volume growth outlook for the remainder of this year.

We're very pleased with our solid financial performance. We will maintain our focus on growing the business. We continue to leverage our logistics capabilities and HollyFrontier's refining footprint to explore third-party acquisition opportunities.

Also, on the call, Damiris was asked about the limited partner/general partnership with HollyFrontier and the cost of capital challenges it poses to Holly Frontier. As Damiris mentioned before, this is on management's to-do list, but it needs to complete the integration of its Petro-Canada lubricants acquisition first.

For years, Holly Energy Partners has been one of the more sure bets among master limited partnerships. It's 100% fixed-fee contract structure kept it isolated from commodity prices, and it focused on growth while maintaining financial discipline. That job was a little bit easier when the company was small and HollyFrontier had lots of assets it could drop down.

Now, HollyFrontier doesn't have many suitable assets to drop down, Holly Energy Partners' distribution coverage ratio is starting to flirt with uncomfortably low levels, and its debt to EBITDA ratio has been creeping up to 4.3 times. None of these issues by themselves are much of an issue, but together, they should make investors slightly more cautious than they were before. Perhaps these issues can subside as throughput volumes in its pipeline systems get back up to capacity and extra cash comes in the door, but one does have to start wondering how it's going to pay for its next wave of growth.