You have to give credit where credit is due, and Pembina Pipeline (NYSE:PBA) has earned a lot of credit for its work over the past couple of years. This quarter featured a number of crowning achievements as it put 2.8 billion Canadian dollars worth of oil and gas infrastructure projects into service to fuel Canada's own booming market. If that wasn't impressive enough, the company is also putting the finishing touches on its monumental Veresen acquisition.

Let's take a look at Pembina's most recent results, and speculate about what investors can expect in the coming quarters. 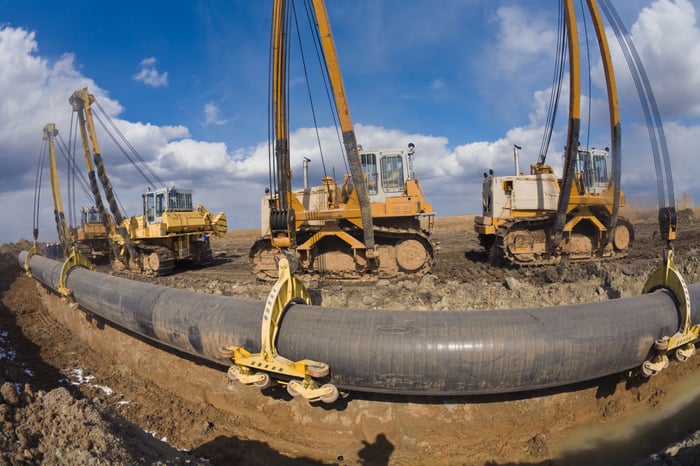 On the operations side of the business, there weren't that many changes. Revenue and margins increased slightly year over year thanks to its conventional pipelines business, but lower margins on its midstream business offset those gains.

What was more notable from this past quarter, though, was the announcement that the company started operations at several of its major growth projects. The largest of these is the CA$2.5 billion Phase 3 expansion of its pipeline network in British Columbia and Alberta. This 420,000 barrel per day capacity increase also gives the company the ability to move several different types of products in separate pipes, which cuts down on processing. This mainline expansion will also fuel its other new investments, a 55,000-barrel-per-day propane fractionator and an expanded diluent hub.

All three of these new assets went operational on the last day of the quarter, so they had no impact on the income statement. Chances are we will see some impact from them in the third quarter, although the facilities will still likely be ramping up to full capacity. 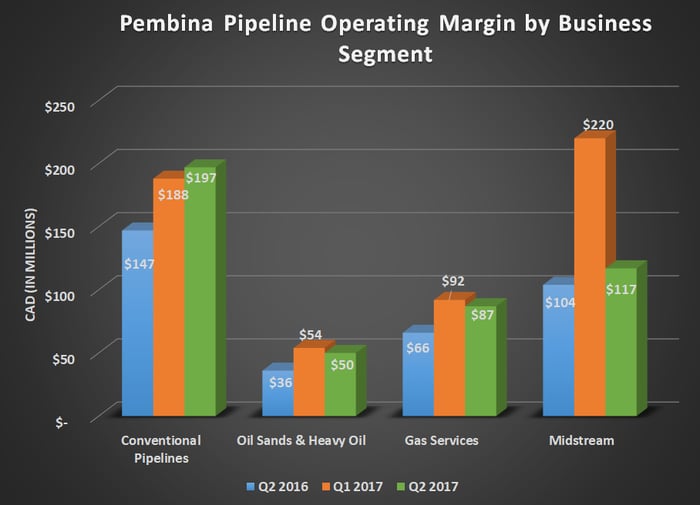 Also in the most recent quarter, management made the final investment decision to go ahead with a 1.2 billion pound-per-year propylene and polypropylene production facility. It will be a 50/50 joint venture with the Petrochemical Industries Company of Kuwait and will cost in the range of CA$3.8 billion to CA$4.2 billion.

This, of course, is all on top of Pembina's pending deal to acquire energy infrastructure company Veresen for CA$9.7 billion. The deal, which received approval from the provincial court and Veresen's shareholders, is expected to close either late in Q3 or early in Q4 pending approval from the Toronto Stock Exchange and Canada's Competition Bureau.

CEO Mike Dilger commented on the uptick in business over the past few quarters, as well as the big jump in earnings it expects once these recently completed projects come online.

On a year-to-date basis, we've reached new volume records in our Conventional Pipelines and Gas Services businesses, which have contributed to beating records in almost all of our financial metrics including adjusted EBITDA, adjusted cash flow from operating activities and adjusted cash flow from operating activities per share. We've also continued to achieve safety and operational excellence with another quarter of zero lost time employee incidents.

As we announced at the end of the second quarter, I am very proud we placed over $2.8 billion of projects into service, with the entire portfolio coming in under budget and either on time or ahead of schedule. These new assets have begun generating significant incremental cash flows, which will positively impact our financial results going forward.

We're working to complete our remaining growth portfolio slated to come into service over the balance of the year and are excited to have entered into the front end engineering design phase of our proposed propane dehydrogenation and polypropylene facility.

At the beginning of its just-completed expansion, it would have been reasonable for investors to be concerned that Pembina had bitten off more than it could chew. Management pulled it off, though, and the company's balance sheet weathered the storm well enough that it could do a multi-billion dollar acquisition that will make the company a North American pipeline behemoth.

With multiple growth options on the table, a manageable debt profile, and a stable cash flow business model, Pembina look like a rather compelling investment currently, especially for people who enjoy receiving monthly dividend checks.