How does a nearly 30% dividend raise sound?

It was undoubtedly music to the ears of Alabama-based Regions Financial (NYSE:RF) shareholders when they heard their bank was making such a hefty increase. Although the company isn't an over-performer in its peer group in certain respects, it still has good potential for higher profitability going forward. And, by extension, paying higher dividends.

Getting the market's attention

To be specific, Regions Financial's new quarterly common stock dividend will be $0.09, an increase of almost 29%. The new distribution would yield a respectable 2.5%, more or less in line with the upcoming payouts planned by fellow regional banking groups PNC Financial Services, Fifth Third, and KeyCorp. 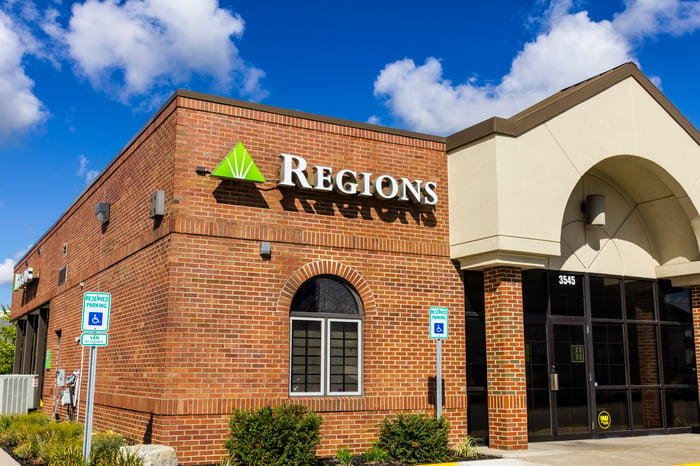 Meanwhile, Regions Financial's payout ratio -- the percentage of net income used for the dividend -- is a comforting 36%.

The dividend will be paid on September 29 to shareholders of record as of September 8, which provides plenty of time for new investors to get in on the action.

Some are already making their move. Since receiving approval in late June from the Federal Reserve for its capital allocation plans (a requirement these days for banks above a certain size), Regions Financial has outpaced the benchmark KBW Nasdaq Bank index, of which it's a component. Over that time, its share price has crept up by nearly 4% to its present level.

But then again, the aforementioned peers PNC and Fifth Third have also outpaced the index, and Fifth Third's planned dividend bump is only 14% (admittedly, PNC's is 36%). In Regions Financial's case, the market might be holding back due to several key metrics.

The company's price to price-to-book value -- a key ratio for banks -- is 1.1, below that of PNC, Fifth Third, and KeyCorp. Typically price-to-book in the banking world more or less reflects an important fundamental ratio, return on equity. As with price/book, Regions Financial is No. 4 in the ROE race.

The bank's recent financial figures, however, show a company that's bringing it on the bottom line. In its recently reported Q2, Regions Financial managed to lift net income by 15% on a year-over-year basis (to $316 million), on net interest income that only advanced 4% and total revenue that crept up a mere 2.4%.

Why the disparity? Much of this is due to sensible cost-cutting measures, chiefly a program of branch consolidation that has seen Regions Financial close around 600 of its outlets (from a 2007 total of over 2,100) across the last decade. It shuttered more than 100 last year alone.

Regions Financial has also boosted its army of "universal bankers," who are trained to provide a relatively wider range of services than the traditional teller. Naturally this requires less headcount, and hence personnel costs. Compounding this, the company has also implemented labor-saving digital solutions such as a video banking service, and DepositSmart ATMs that feature enhanced ATM services.

Technology will only improve those cost-saving initiatives and bring new opportunities. This bodes well for Regions Financial's continued profitability growth, since the bank has enthusiastically embraced these solutions and is sure to continue doing so.

Considering the state of the company and its potential going forward, I think will be able to continue raising its profitability. A fatter bottom line, of course, provides the means to lift the payout, another trend set to continue at Regions Financial. I very much doubt this is the last dividend raise we'll see from the bank.