Tucows (NASDAQ:TCX), which operates a trio of domain-registration, mobile-service, and high-speed fiber internet businesses, will report its second-quarter earnings on Aug. 8. With the company's stock already up around 55% year to date, investors are betting the company will continue its market-beating ways as it uses the substantial cash flows from its domain and mobile segments to fund its huge fiber-internet opportunity.

Here are some key factors to watch to see whether Tucows can keep its streak of outperformance alive. 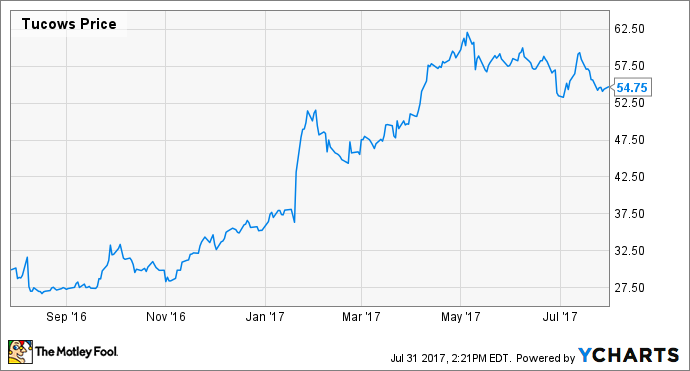 In January, Tucows made its largest acquisition yet with the purchase of fellow domain-registration provider Enom for $83.5 million. With 29 million domains under management, Tucows is now the world's second-largest domain registry, behind only GoDaddy. At the time of purchase, Enom generated around $15 million in adjusted EBITDA, which Tucows expects to grow to $20 million by the end of 2018, as it wrings out inefficiencies in the combined businesses.

With the addition of Enom, Tucows' domain segment revenue grew 82% in the first quarter to $50.5 million. However, the acquisition will obscure some of Tucows' growth metrics for a while, as it makes year-ago comparisons quite complicated. This caused enough confusion on the first-quarter conference call that CEO Elliot Noss filmed an eleven-minute video to walk through the particulars; he noted that the transaction created big accounting impacts to deferred revenue and adjusted EBITDA, which will mostly work their way through Tucows' financial statements by the end of 2017. While the explanation gets fairly lengthy, investors will want to focus on management's initial guidance for full-year 2017 adjusted EBITDA of $50 million -- which, due to a change in reporting preferences by the U.S. Securities and Exchange Commission, management expects will now come in at around $42 million.

What to watch for: News on how the Enom integration is proceeding, as well as any update on adjusted EBITDA guidance. 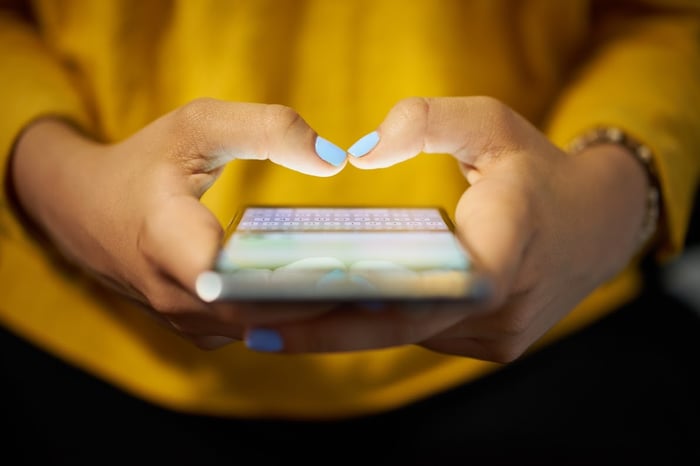 Can Ting Mobile continue to ring up strong subscriber growth?

In the first quarter, revenue for the company's mobile-services segment, Ting Mobile, grew 11.5% to $18 million. Ting -- which provides discount phone service without contracts -- added 5,500 accounts and 12,000 devices in the first quarter, bringing it to a total of 175,000 accounts and 280,000 devices. According to Noss, Ting still represents less than 0.1% of the U.S. mobile-phone market.

Tucows is in a sort of slow-motion transformation of its business, as the domain side of things should mostly stay stable, while the company expects massive growth from Ting. In fact, even though the domain segment was responsible for more than 70% of first-quarter revenue, Noss has stated that over the next five to ten years, he'd be surprised if the business doesn't become overwhelmingly dominated by Ting.

What to watch for: Noss has stated that net subscriber additions are the most important metric to the company's success over the next couple of years, and I'm in no position to argue.

Tucows' third business is Ting Internet, which provides high-speed fiber service without fixed contracts to three small communities today. While first-quarter revenue for this segment was just $1.14 million, Ting Internet represents another high-priority growth avenue and is just getting warmed up. The company will be adding service to Centennial, Colorado, and Sandpoint, Idaho, in 2017, and expects to announce additional "Ting towns" later this year. Ting also estimates that half of the 85,000 serviceable addresses in its first five towns will become customers within five years of launching in a particular community.

What to watch for: Noss has stated that Ting will most likely announce two to three new fiber towns in 2017. Look for how many additional serviceable addresses this would create, as well as any updates on Ting Internet's path to profitability. The current target date for profitability is late 2018 or early 2019.

Following Tucows is like following three distinct businesses, which may be one reason it remains a bit under the radar. As the domain business continues to gush cash, if Ting Mobile can keep growing at healthy double-digit rates while Ting Internet accelerates its expansion, more investors may begin to catch on to this long-term growth story.