Back in 2012, I was just as high on natural gas as the growth driver for our country's energy independence as the next person. "It [will become] clear to the broader public that the switchover to natural gas is a smart, cost-effective move," I said. 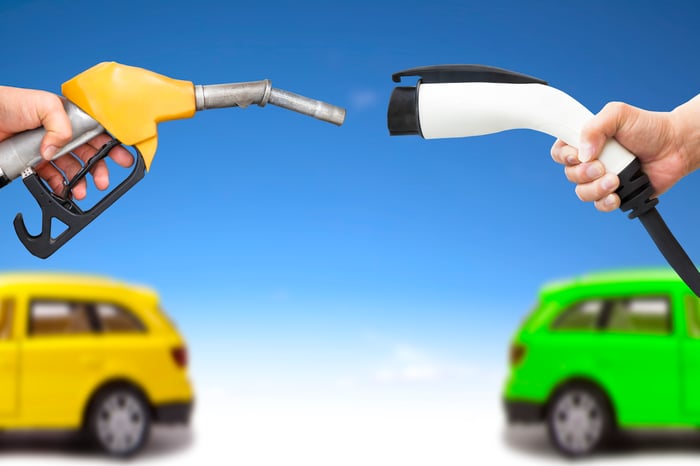 The breathtaking adoption of electric cars coupled with unexpectedly low gasoline and diesel costs in the intervening five years have changed just about everything.

With these changes, the thesis behind buying Clean Energy Fuels (NASDAQ:CLNE) -- a company that has built out a network of natural gas fueling stations, primarily for long-haul truckers -- has evaporated. I don't see any way the company can pivot to another sustainable business model, nor do I envision a future where natural gas has relative prominence for transportation.

But first, why I could be wrong

To be sure, all is not lost if you are a current shareholder of Clean Energy. While I don't like the company's balance sheet one bit, it has gotten much healthier over the past five years.

Shoring up The Balance Sheet at Clean Energy
Infogram

Selling More, But Getting Less
Infogram

Given that the stock currently trades at just 0.7 times book value, and on par with sales, there's a valid argument that could be made that this could be an excellent value stock over the near term. Electric cars are gaining in popularity, but they still represent just a fraction of what's out on the roads right now. And if the transition in passenger vehicles takes a while, there's no telling the kind of legs that natural gas might have as a "bridge" input for long-haul truckers.

Do you know when the transition will happen?

Here's the key part that bothers me about the bull case for Clean Energy: the fact that it could be an excellent value stock over the near term. Why do I say that? Because as I referenced above, it seems pretty clear at this point that electric vehicles are gaining a type of unstoppable momentum that is silly to ignore.

Most telling is a report from RethinkX that has me completely...uh, rethinking...my view of the future of transportation. The report claims that the transition to autonomous electric fleets will occur much faster than we think, with 95% of all miles driven in the country being done by such fleets in under 15 years.

The basics of the thesis are pretty easy to understand: it will be far cheaper to use these fleets. With cars being in use 40% of the time, instead of the current 4%, there will be more efficiency; fuel costs will drop dramatically; because of fewer moving parts, so too will maintenance; and insurance will be negligible. All told, RethinkX thinks transportation costs could drop by up to 90% for most Americans.

That being said, Clean Energy is more concerned with trucks than it is passenger cars. But there's no reason that all of the factors listed above -- round-the-clock utilization, cheaper fuel, less for insurance and maintenance, and, additionally, no labor costs -- won't have the same effect on the highway's trucks.

It's important to remember that the pace of change in our world is actually accelerating. Things that we think will take a generation to change could flip in under ten years. Patterns that we believe could last for at least a decade could disappear in just a few trips around the sun.

The point is this: Clean Energy Fuels doesn't have any visible optionality. It will provide natural gas primarily to trucks on North American highways. When the demand for such fueling stations disappears, there's no visible path for the company to travel down. Gallon-equivalents sold may very well increase for the next two, five, or even ten years. But we all have a pretty good idea of how this will end: with a conversion to autonomous electric fleets.

The question is: do you want to risk being the bag-holder when that time comes, or do you think you'll be able to time your trade to get out in time?

Clearly, you know what my answer is.