You may have an idea where gold mining companies operate their mines; however, once the yellow stuff is dug out of the ground, where does it go? It certainly doesn't stay in the country where the mine is located. Let's look, then, at the five countries that opened their doors the widest in 2016 to welcome gold imports.

Dropping one place from 2015, India was the fifth largest importer of gold last year -- a year in which the subcontinent's gold market was on a wild ride. Significant volatility was due, in part, to the government's announcement that it would be removing banknotes in denominations of 500 and 1,000 rupees. Although demand jumped following the announcement, the effect was temporary; overall demand fell to its lowest level since 2009. 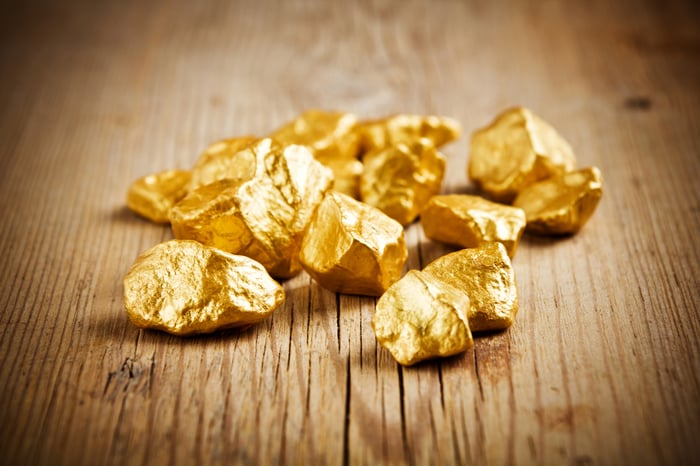 Some analysts forecast India will recover from the lower demand, which could drive imports higher. Consumer demand was 666 tonnes in 2016 -- far below the average annual demand of 846 tonnes over the past five years -- but according to the World Gold Council's estimates, consumer demand will rise to a range of 850 to 950 tonnes in 2020.

Otherwise known as the Pearl of the Orient, Hong Kong accounted for 8.7% of the world's gold imports in 2016. The autonomous territory imported 42% of its gold from Switzerland -- exceeding, by far, Hong Kong's second largest provider of gold, Australia, which accounted for 17% of imports.

Although 842 tons of gold made its way into Hong Kong in 2016, it apparently didn't stay for too long. Dipping into its reserves, Hong Kong subsequently exported 1,337 tons last year -- 65% of which went to mainland China, whose appetite for the yellow metal has skyrocketed over the past decade since the government's ban on private ownership of the metal was lifted in 2004.

Although there was a 3% year-over-year drop in its jewelry market, the U.K. climbed its way back into the top five after falling to sixth place in 2015.

The Brexit vote surely affected the renewed and greatly increased appetite for the yellow metal. Whereas it averaged gold imports of $14.9 billion from 2012 through 2015, the U.K. imported nearly four times as much in 2016 -- approximately $58 billion.

Looking ahead, the U.K.'s imports in 2017 may very well be comparable to last year as the uncertainty regarding Brexit still looms. For example, the start of 2017 illustrated investors' interest in turning to gold bullion. According to the World Gold Council, in Q1 2017 the U.K.'s gold bar and coin market hit its highest level since Q2 2013.

Importing $64 billion in gold last year, China fell from the top spot it held in 2015. Eager to fill up its coffers, however, China held on to the yellow stuff and only exported $1.2 billion in gold. As a result, the nation -- $62.7 billion richer in gold at the end of 2016 -- ranked the highest in terms of gold trade balance. For some context, the U.K. and China earned second and third place, with trade balances of $42.2 billion and $18.6 billion, respectively.

Gold bar and coin demand rose for the third consecutive year; consequently, China's demand for bullion is now above its five-year average, according to the World Gold Council. For the balance of 2017, there's speculation that the country's hunger for the metal will remain strong. In June, Bloomberg reported that "Demand is rising on concerns over property, share, and bond markets and the outlook for the yuan, amid a government drive to reduce leverage in the financial system."

For the fourth year out of the past five, Switzerland -- accounting for 24.4% of the world's imports -- emerged as the global leader. But don't be fooled: The country also ranked first in gold exports for the fifth consecutive year, proving it's truly the global hub for the gold industry. In fact, four out of the world's five largest gold refineries are located in Switzerland. For example, Valcambi SA, a leading Swiss refiner owned by Newmont Mining Corp., has an annual refining capacity of about 1,400 metric tons.

To further illustrate Switzerland's vital role in the gold industry, consider the following: According to the U.S. Geological Survey, approximately 3,100 tons of gold were produced in 2016; Switzerland imported 2,716 tons, or 88%.

Whether it's political events like Brexit or remonetization efforts like the one in India, nations will always have reasons to build up their gold reserves. Though this may affect rises and drops in the price of gold, long-term investors should not be moved to act solely by the occurrence of these events in the headlines. Rather, they should recognize them as the nature of the gold market -- not causes for immediate action.

Underpinning an investment in gold is the recognition that there will be both surges and plunges in gold prices. This activity can certainly result from events like changes in a nation's gold-importing behavior, but long-term investors should shrug these swings off and stay the course.