Shares of 3D Systems plunged 21.1% on Thursday. While the quarterly results were disappointing, the main driver of the market's reaction was probably the company lowering its previously issued full-year 2017 revenue and EPS guidance.

Earnings releases generally don't provide much information beyond the numbers, but a wealth of color about a company's performance and future prospects is usually shared during the quarterly analyst conference calls. Here are two key topics you should know about from 3D Systems' Q2 call. 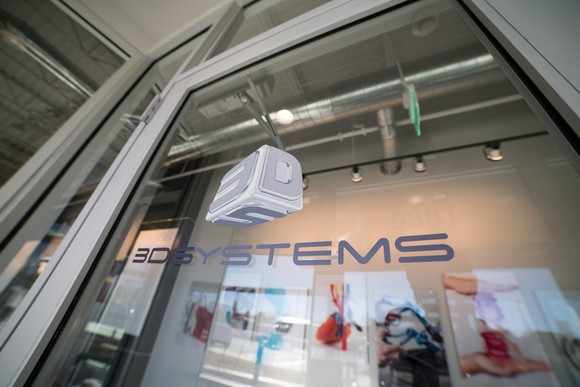 1. Sales of production 3D printers increased by units and revenue

While total printer revenue decreased, production printer revenue and units increased compared to the prior year's quarter. During the quarter, there was increased demand for SLA [stereolithography], SLS [selective laser sintering], and DMP [direct metal printing] systems, which was offset by lower sales of MJP [MultiJet] professional printers. We have had very positive reception [to] our MJP 2500 printers, including the 2500 wax, and we continue to improve our production efficiency and capacity to meet increasing customer demand for these printers.

Some key background information: Revenue from sales of 3D printers dropped 14% year over year to $28 million, accounting for 17.6% of 3D Systems' total quarterly revenue of $159.5 million. 3D printer sales, however, are much more important than the 17.6% figure suggests because they're the profit engine powering 3D Systems' razor-and-blade-like business model. The more 3D printers the company sells, the more revenue it should generate over the life of those printers from sales of higher-profit print materials. Software sales also stem from 3D printer sales.

2. An update on the metals business

Metal 3D printing is the fastest-growing space within 3D printing, so many investors naturally want to know how 3D Systems' metals business is performing. Management hasn't said much for some time about its metals business, but there were a couple good nuggets about this business covered on the call.

[W]e are very successful in metals in the healthcare [vertical]. And I think our main thing that we want to do [is] ... to expand into industrial, into the aerospace [vertical] with the metal opportunity.

As to Joshi's first comment, some investors were likely assuming that it was probable that 3D Systems' metal business was doing at least fairly well in the healthcare space. That's because the company's healthcare business has generally been performing well and this business includes selling metal 3D printers and producing patient-specific metal orthopedic implants, among other things. However, we couldn't know that for sure, so it was good to have a confirmation from Joshi.

His comment also suggests that the metals business hasn't had much success yet in the aerospace market. This will be a considerably more competitive market now that General Electric (NYSE:GE) has entered the 3D printing supply business. The industrial giant -- which plunked down more than $1 billion late last year to buy controlling stakes in two European 3D printing companies -- has particular expertise in the use of 3D printing in the aerospace realm.

As to Joshi's second comment, it's not news to some investors who have been following the company for some time that 3D Systems has had quality and reliability issues with its ProX DMP 300 metal 3D printer. However, it should be welcome news to all investors that the performance of the newer ProX DMP 320, which launched in early 2016, is reportedly "excellent" in the marketplace.

While I highlighted some positives here, I want to be clear: 3D Systems' second-quarter results were quite disappointing, as was the fact that the company lowered 2017 guidance.

As I've previously have opined, 3D Systems will likely not successfully turn around its business unless and until it shows revenue growth from 3D printer sales without sacrificing margins. The launch of Figure 4 should help on this front if there is demand for this speedy next-generation platform for the production of plastic parts, but investors should consider Figure 4 just "very promising" until we see some revenue flowing in. Joshi reiterated on the call that the company expects to start booking revenue from sales of Figure 4 in the second half of this year and that sales will ramp up in 2018.