Grab a pickax, and let's dig in to uncover the proof that the president loves the yellow metal.

It isn't one of the talking points his communications office has addressed, and it hasn't been the subject of impromptu remarks at speaking engagements. Nonetheless, it's clear that Donald Trump adores gold. In September 2011, he accepted a security deposit of $176,000 in the form of gold bullion. And in a 2016 interview with GQ, he opined: "Bringing back the gold standard would be very hard to do, but boy, would it be wonderful. We'd have a standard on which to base our money."

This is insufficient material, though, for us to be sure of his stance. Rather, it's his comments regarding the dollar -- and commerce in general -- that provide enough substance for us to discern his perspective. Since the price of gold often moves in opposition to the value of the dollar, it's logical to conclude that his comments, or actions, that adversely affect the strength of the dollar will, consequently, benefit gold prices.

So let's grab our shovels and unearth the evidence proving that Trump is an aficionado of gold. 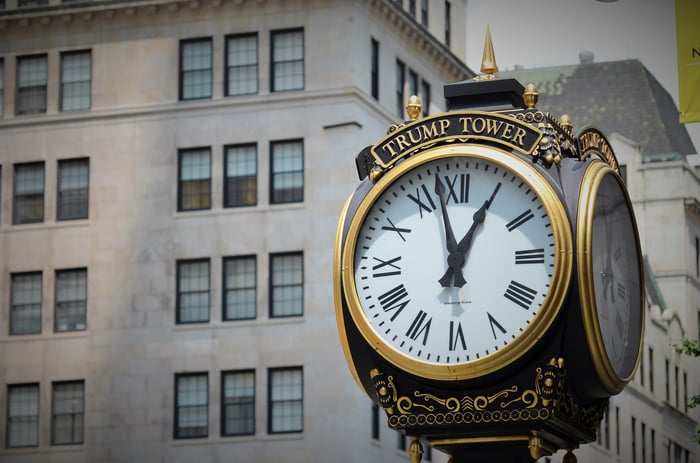 Blame it on the tractors

Although Trump apparently embraces the gold standard, the likelihood that the U.S. will return to it would be highly unlikely at best. It's his comments from a Republican debate that suggests his love of gold. Addressing what he characterized as unfair trade practices, Trump suggested that the U.S. has lost between 4 million and 7 million jobs because of China's efforts to devalue its currency.

Japan compounded the problem, he said, by devaluing the yen, giving companies such as Komatsu an edge over American-based companies. Trump claimed: "Friends of mine are ordering Komatsu tractors now because they've devalued the yen to such an extent that you can't buy a Caterpillar tractor. And we're letting them get away with it, and we can't let them get away with it." 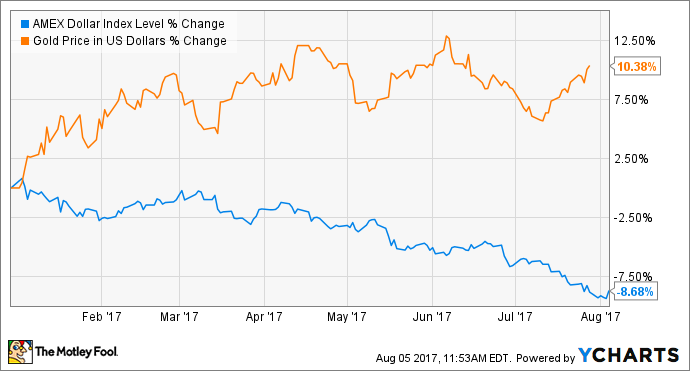 Apparently, the market has accepted Trump's claims. Since he has assumed office, gold has risen in almost exactly inverse proportion to the dollar index.

Walking back his tough talk -- but only a little

Despite the vitriol he showed regarding foreign currency manipulation during his campaign, Trump has since been more measured in addressing the issue. In an interview with The Wall Street Journal in April, Trump revealed that he didn't intend to label China as a "currency manipulator" -- a claim he made during the campaign. To do so could very well have resulted in a weakening of the dollar and a rise in the price of gold.

But that comment was just a snapshot of the interview.

Later, he returned to addressing the value of the dollar. And according to him, the dollar is getting ahead of itself, suggesting the dollar was "getting too strong" and adversely affecting the economy. He may have been reluctant to place a label on China, but he wasn't afraid to reaffirm his general position: "It's very, very hard to compete when you have a strong dollar and other countries are devaluing their currency."

This statement, paired with his perception that the dollar was too strong, shook the market. Following the interview, the dollar dropped while gold rose. 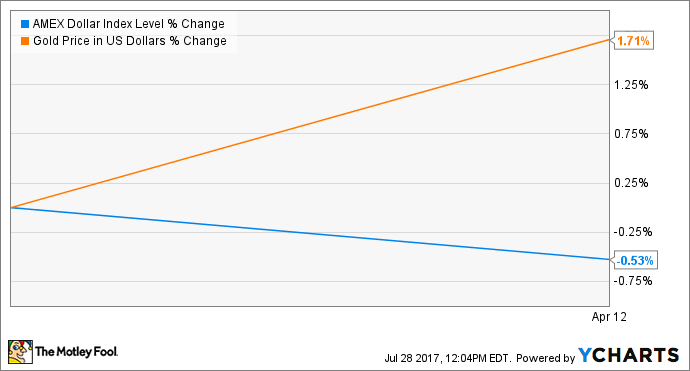 More talk to come later, though?

Consistent with his previous statements, Trump has so far failed to label China as a "currency manipulator," but that hasn't compromised his strong stance against the country. Trade talks between the two nations ended in mid-July without any progress. Both countries agreed, however, to "work cooperatively" in pursuit of reducing the U.S. trade deficit.

And how did the market react to the unproductive trade talks with China? The strength of the dollar has since dropped approximately 1.54% as of this writing, and the price of gold has risen about 2.34%.

Hardly one to mince words, Trump has repeatedly proven his willingness to speak his mind on nearly every topic which grabs his attention. Gold, however, is something which he has been less direct about, but judging by his comments about the dollar, one can reasonably infer that he is partial to the yellow metal. This may come as welcome news to gold investors, believing that gold prices will continue to rise through a Trump presidency, but they must temper their excitement.

Trump's perspective on the dollar and trade relations may contribute to upticks in the price of gold, but his opinion is not the stuff upon which investors should base a long-term investment. Savvy investors know that successful investing is as much a matter of patience and discretion as it is recognition of market dynamics. In other words, the price of gold may rise as the president comments on trade relations and a weaker dollar, but these are temporary events -- something which long-term investors should disregard.