Netflix (NASDAQ:NFLX) is back atop the leaderboard of revenue-generating apps in a combined count from the iOS and Google Play stores, according to apps measurement company App Annie. This means subscribers are prepared to watch on either a tablet or a smartphone.

This is great news for Netflix in many ways. The more engaged a user is with the product, the less likely they will be to cancel, and if people are willing to watch on a smartphone screen, that increases their opportunity to engage with Netflix. 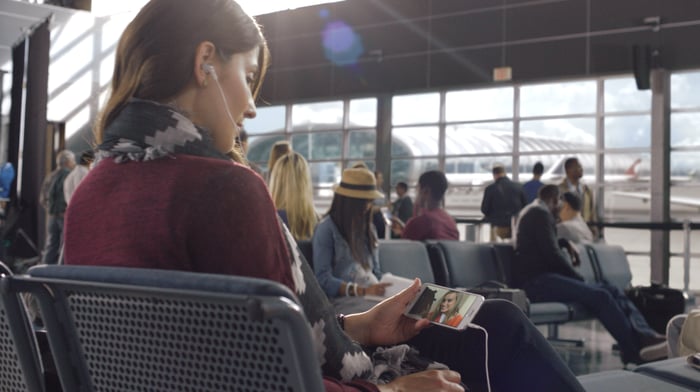 Numbers from comScore reported by Recode show that Americans spent 125 million hours watching Netflix on their smartphones in June. That number is up 35% from June 2015 results though the same as June 2016's number. Netflix reported in July that it had about 52 million memberships in the U.S. so that works out to only about 2.4 hours of viewing per membership.

Smartphone viewing may be one more of convenience than necessity in the U.S. as fixed-line broadband access is readily available to most homes. Pew Research reports 67% of adults chose to have a fixed-line internet connection in their home as of 2015.

The international opportunity for Netflix

This past quarter, Netflix announced it had more international total streaming subscribers than U.S. subscribers for the first time ever. Looking forward, this trend of international subscribers outpacing the company's more mature U.S. market is likely to continue as over 7 billion people live outside the United States.

The international small-screen opportunity is huge. As an example, India has a population of over 1.3 billion. According to a study by We Are Social and Hootsuite reported on by Tech in Asia, 79% of India's internet traffic is on mobile devices. Less than 19 million fixed broadband connections exist in the country.

Other developing countries have similar numbers.

Data source: Percent of internet traffic using mobile devices from "Digital in 2017 Global Overview" by We are Social and Hootsuite. Population from Worldometers. Chart by author.

Does Netflix have a trick up its sleeve?

Netflix management likes to hold their cards close to the vest. On the most recent quarterly earnings call, a discussion of mobile usage in emerging markets took place. CEO Reed Hastings painted the following picture:

... we've had great success on mobile in the developed markets like the U.S. and Europe and then throughout Latin America, now in Asia. And all of the Netflix service works extremely well on mobile.

He was then asked:

....as you consider emerging markets again broadly, is there a capacity to mass market product without having the need to lower price point?

... we'll see. We've been very successful getting to beginnings of a mass-model product in Latin America, where you've got a lot of fairly developed economies. We'll see in Asia what we can do with that. But for the first couple of years, it's focused on more high-end, Western-oriented elites. And then as we grow into that, we can think about expanding beyond that.

It makes me wonder if the company might seek to take advantage of large populations of potential subscribers in emerging markets by offering a lower-price subscription plan tailored to the smartphone audience. It would not be unusual for Netflix to adapt to a changing subscriber landscape by modifying its approach to the market. One only has to remember that a few years back, Netflix was all about red envelopes and DVDs.