Investing in medical device companies can be ridiculously profitable.

Since their respective IPOs, shares of Intuitive Surgical (NASDAQ:ISRG) -- maker of the daVinci robotic surgical system -- and Medtronic (NYSE:MDT) -- parent company behind a host of medical devices -- have yielded returns of 25% and 15% per year, respectively, after accounting for dividends. Most investors would give anything for those types of returns. 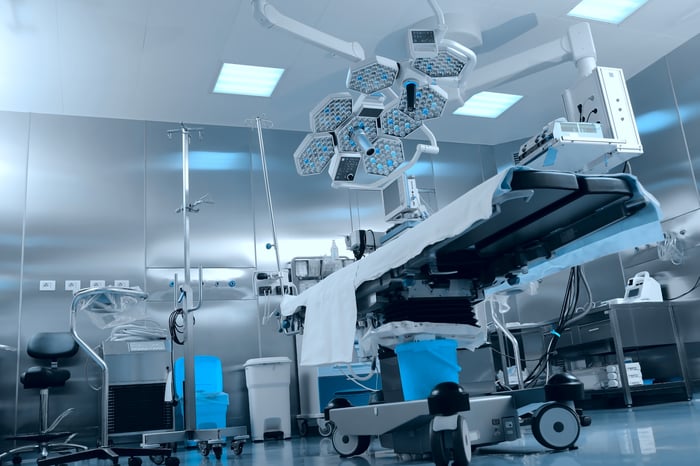 But which stock is the better buy today? We will never know the answer to that question with 100% certainty. But we can get a better idea of what we'd be buying by evaluating the two companies on three different metrics. Here's how they stack up.

If you're a long-term, buy-to-hold investor, you should be spending most of your time evaluating the sustainable competitive advantage -- or "moat" -- of the companies you are putting your money into. In its simplest form, a moat is what keeps customers coming back for more, year after year, while keeping the competition at bay for decades.

Right now, Intuitive Surgical is the only worldwide player in robots helping to perform minimally invasive surgeries. With thousands of daVinci robots installed worldwide, doctors have logged millions of hours on the company's machines. That creates a powerful moat -- these doctors and hospitals have sunk costs and hours of training in the Intuitive eco-system, and they continue to tinker with using the robots in ever more procedures.

But Medtronic is no slouch in this regard either. The company makes a dizzying array of medical devices, from defibrillators to heart stints to implanted drug delivery devices. While the switching costs for these devices aren't quite as high as those of the daVinci machines -- there are fewer sunk costs -- doctors and hospitals are still loath to switch away from devices they've come to depend on. Given the simple breadth of devices Medtronic offers, I'd call this one a draw.

Folks who invest in Intuitive Surgical would probably like to see cash being reinvested into future growth opportunities, as the robotic surgery niche may just be getting started. Medtronic investors, on the other hand, are likely sticking around for the company's dividend payouts and share buybacks.

But while both of those things have their place, there's something to be said for simply building up a pile of cash and letting it sit around. Every company, at one point or another, will face difficult economic times. Those with cash on hand often emerge stronger, with options from buying back shares on the cheap to acquiring rivals to outspending the competition into oblivion. Those with lots of debt find themselves on the opposite end of that equation.

Keeping in mind that Medtronic is valued at over three times the size of Intuitive Surgical, here's how the two compare.

Both companies have very strong cash flows, which means that the balance sheet is the differentiator. On that front, Intutitive comes out ahead. The company has been a cash machine over the past two years, and is operating with absolutely no debt. Medtronic's debt load, while very manageable, is much higher.

On every metric possible, Medtronic looks like the cheaper stock. Not only does it have lower price ratios, but it also offers a 2.2% dividend that is very sustainable.

So there you have it: we have a tie. When this happens, I'll usually side with the company with the wider moat. But here again, we have a tie. As a second tie-breaker, I'll go with where my own skin-in-the-game is: Intuitive Surgical. The company currently accounts for just over 3% of my real-life holdings. That being said, I think both companies are worthy of your consideration.