What a difference a couple of quarters has made for Targa Resources (NYSE:TRGP). It wasn't so long ago that a lack of growth options was a major concern for the company. Today, though, Targa has a robust queue of projects in the works, and the company just announced even more growth.

Let's take a look at the company's most recent earnings results, and then see what management has up its sleeve. 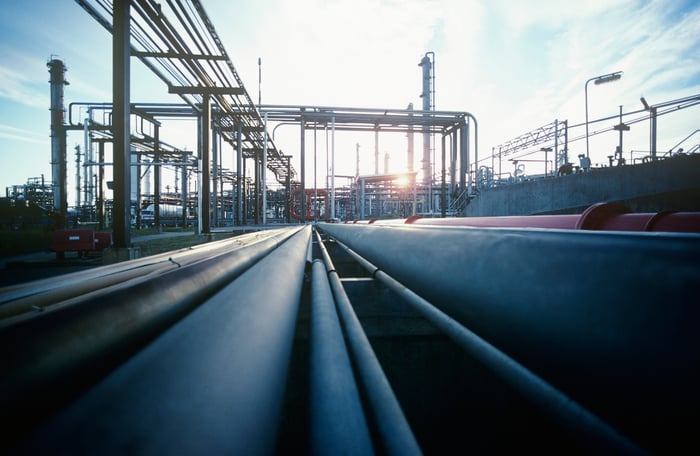 Comparing Targa's results to the last couple of quarters doesn't show a whole lot of change. Distributable cash flow was more or less the same from the prior quarter as modest increases in commodity prices offset slightly lower volumes for some of its gathering and processing pipeline. On the logistics and marketing side of the business, Targa reported higher fractionation volumes, but lower exports of liquefied petroleum gas and overall natural gas liquids sales.

Also, Targa hasn't brought many assets on stream in recent months. It wasn't until recently that it had projects to work on, anyway. That changed in a big way, though, as management gave the green light to several billion in new development projects. In the past three months, it has increased its 2017 capital budget by $250 million to $1.21 billion. The extra capital will be used to build the Grand Prix NGL pipeline from the Permian Basin to its fractionation complex in Mont Belvieu, Texas.

This is probably the best investment the company could make right now. Targa has two distinct businesses with little overlap: extensive gathering processing assets in several shale basins across the U.S., and a large fractionation, marketing, and export business on the Gulf Coast. The issue is that there's no connection between them. The Grand Prix NGL pipeline will give Targa's Gulf Coast assets a direct feed line from its gathering assets, which will allow the company to better monetize all of them. It wouldn't be surprising if the company does something similar to connect its gathering assets in Oklahoma to the Gulf Coast as well.

CEO Joe Bob Perkins had a lot to say about the recent decision to invest in the Grand Prix NGL pipeline.

A pivotal development during the quarter was our announcement to move forward with a 300,000 barrel per day common carrier NGL Pipeline from the Permian Basin to Mont Belvieu ("Grand Prix"), which is expected to commence operation in the second quarter of 2019.  Grand Prix will connect our expansive and growing Permian Basin footprint to our downstream assets at Mont Belvieu. Today, we have approximately 1.7 billion cubic feet per day of processing capacity in the Permian Basin, with another 710 million cubic feet per day under construction that will come online by the third quarter of 2018.  Our strong long-term outlook beyond 2017 is supported by our visibility around activity levels and projects coming online, including our Gathering and Processing projects, the addition of Grand Prix and other opportunities in our Downstream segment.

Targa has a lot of growth options, and it just completed a $777 million share issuance in May to fund a good portion of this capital program and pay off some of its higher-interest-rate debt. This equity sale, coupled with the $1.5 billion in revolving credit, and a debt-to-adjusted-EBITDA ratio of 3.3, suggests the company has plenty of financing options (although issuing equity that pays an 8.1% dividend is expensive).

Targa is in a much better place than it was this time last year, and it could have even better things ahead of it as it leverages its two disparate businesses into an integrated natural gas liquids transportation and processing system.