Corning Incorporated (NYSE:GLW) recently reported its second quarter earnings and even a cursory glance at the results show healthy growth in nearly every meaningful metric. The company's core sales increased to $2.6 billion, a 6% increase year over year, and its core EPS increased to $0.42, a 14% increase over 2016's second quarter. While the stock price immediately dipped after Corning reported earnings, long term, buy-and-hold investors know to focus on a business's underlying fundamentals, not short term price volatility. Besides, shares are still up more than 20% year-to-date.

Many quarterly highlights were discussed during the conference call, including the major deal it recently scored with Verizon and Apple's major investment in Corning's Gorilla Glass manufacturing capacity. What might excite investors most, though, is a completely new opportunity Corning is looking to exploit: glass pharmaceutical packaging. Granted, it doesn't sound sexy or exciting, but the market could be as big as $4 billion in annual sales and could lift Corning's companywide margins in the process.

"A breakthrough product ... for the next decade and beyond"

The new pharmaceutical packaging is being called Corning Valor Glass and, according to CEO Wendell Weeks, it "dramatically reduces particle contamination, breaks, and cracks while significantly increasing throughput." The delicate and precise nature of medicine requires strong quality control and recent problems in pharmaceutical packaging have led the FDA to issue warnings on "lamella" -- the tiny flakes of glass that can contaminate pharmaceutical products. Valor Glass is designed to eliminate these problems.

Most encouraging for investors during the conference call was to hear Weeks tout two meaningful endorsements of the products from some of the pharmaceutical industry's biggest players. Merck and Co., Inc.'s CEO Ken Frazier said that his company "plans to convert several injectable products to this exceptional new glass packaging solution pending appropriate regulatory approvals." Pfizer Inc's CEO Ian Read went even further, calling his company's collaboration with Corning a "game changer." After quoting these two endorsements, Weeks concluded:

Valor also provides a powerful example of what happens when our focused and cohesive portfolio meets a customer opportunity. We started out with major customers from our life science vessels platform. We reapplied our expertise in glass science, optical physics, vapor deposition, precision forming and extrusion to develop a breakthrough product that we believe has the potential to power Corning's growth for the next decade and beyond. 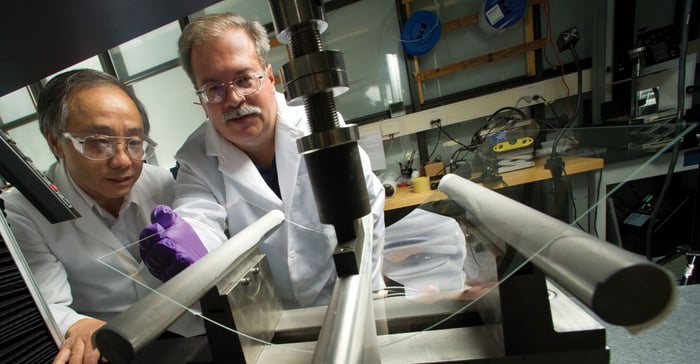 From here to there

Corning's management said it plans to start with a relatively small investment of $500 million but that, over time, investments in Valor Glass could rise to as much as $4 billion depending on customer demand. Investments in the platform have already been calculated in management's guidance. The best news might be that Corning predicts ongoing annual sales for this platform will equal the platform's one-time start-up investment costs with profitability exceeding the company's average.

As for when this product will be able to see the light of the market, a lot depends on the FDA, which can decide to accelerate Valor Glass's approval, allowing it to reach the market more rapidly than it otherwise would. For this reason, Corning believes it will be able to paint a better picture of the road map ahead once the product is officially submitted for approval. The positive side to the highly regulated FDA approval process is that it gives advance notice to Corning of market demand, significantly de-risking its initial investments into the space.

Corning's glass is still half full

As already noted, Corning's stock price declined by about 8% since reporting its second quarter earnings. Why? Probably because it gave conservative guidance for its Optical Communications division after admitting earnings for the division might be lumpy due to the inherent difficulty in planning for major infrastructure projects by large telecom and internet service provider companies. Yet, in the same release, Corning also announced plans to launch its new Valor Glass platform which could potentially boost company sales by 40% per year all by itself. As an investor, which one of these facts do you think is more material to Corning's long term success?

Remember, the market rewards those with a long-term horizon who are savvy enough to exploit short term volatility. While there are never any guarantees, this certainly looks like such an opportunity.