Bank of America (NYSE:BAC) is set to earn a lot more money if interest rates continue to climb. Just how much more? According to the bank's latest quarterly regulatory filing, it will generate an additional $3.2 billion in net interest income over 12 months if short- and long-term rates increase by 100 basis points, or one full percentage point.

To understand why this is the case, it's helpful to analogize a bank to a retail store. Holding all else equal, if the prices that a retail store can attract for goods increase, then so too will the store's revenue.

The same is true for banks, though they sell money as opposed to, say, lawnmowers and shovels. The higher the price of money, in turn, the higher a bank's revenue will climb, with the price of money being denominated in interest rates. It's not just revenue by way of net interest income that will climb at Bank of America. The Charlotte, North Carolina-based bank's earnings should improve as well.

This follows from the fact that a bank's lending margin should expand as rates head higher, as they've been doing -- at least on the short end of the yield curve for the past year. This trend is due to the Federal Reserve's decision to boost the fed funds rate, the primary short-term interest rate benchmark in the United States, three times since the beginning of last December. 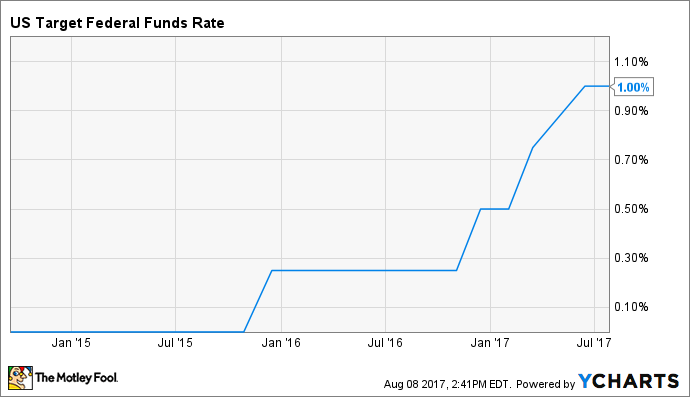 To this end, while higher rates will also cause Bank of America's funding costs to increase, as depositors will eventually demand that the trend be reflected in their checking and savings accounts, a good chunk of Bank of America's deposits is held in non-interest bearing accounts, which are impervious to changes in interest rates. On average, the nation's second biggest bank by assets had $437 billion worth of such deposits in the second quarter.

Now, there are downsides to a rising rate environment when it comes to banks. Namely, as rates head higher, the value of fixed-income securities on bank balance sheets will drop. But virtually any bank would trade the one-time drop in securities' values for the perpetual benefit to revenue and earnings that comes from higher rates.

It remains to be seen, of course, how quickly the Fed will ratchet up rates in the months ahead. Right now, the probability markets don't expect it to do so at its monetary policy meeting next month, forecasting a 99% chance that short-term rates will stay the same. But with the unemployment rate at only 4.3%, which is well below the Fed's 5% estimate of the natural rate of full employment, it wouldn't be surprising to see the central bank raise rates at least one more time before the end of the year.

If it does, Bank of America and its shareholders will be ready and waiting.