The video game industry has been on fire this year, and Take-Two Interactive Software, Inc. (NASDAQ:TTWO) has been riding that wave higher. Even after announcing that its highly anticipated Red Dead Redemption 2 would be delayed until spring 2018, the stock continued its upward march. Before Take-Two reported its financial results last week, the company's stock had gained 60% so far this year, and it would take strong results to keep that rally going. However, the video game maven responsible for such hits as Grand Theft Auto and NBA 2K17 did not disappoint.

For the just completed quarter, Take-Two reported net revenue that grew to $418.2 million, a 34% increase over the $311.6 million from the prior year quarter. Investors had been expecting revenue of $281 million. Digitally delivered net revenue jumped 56% year over year to $268.2 million, while recurrent consumer spending on virtual currency, downloadable add-on content, and micro-transactions increased 72% year over year, comprising a full 63% of digitally delivered revenue. Grand Theft Auto Online continued to be the single largest contributor to recurrent consumer spending.

Not only top line growth...

The company also saw strong gains in gross margins, which increased to 53% compared to 38% in the prior year quarter, driving more profit to the bottom line.

Take-Two produced net income of $60.3 million, up from a loss of $38.6 million in the prior year quarter, resulting in earnings per share of $0.56, compared to a quarterly loss of $0.46 year over year and easily surpassing the $0.40 expected by investors.

Take-Two was so heartened by its results that it revised its full year forecast, now expecting GAAP net revenue between $1.62 billion and $1.72 billion, with GAAP net income in a rage from $112 million to $140 million, resulting in diluted earnings per share between $1.00 and $1.25. The company also expects to produce net cash of $200 million, up from its previous forecast of $150 million

Chairman and CEO Strauss Zelnick conveyed his optimism about the strength of the quarter and the company's prospects for the future:

Fiscal 2018 is off to an excellent start, with our business's positive momentum continuing to exceed our expectations in the first quarter. We delivered growth in both net sales and net revenue, as well as margin expansion. Our results were led by the ongoing extraordinary performance of Grand Theft Auto V and Grand Theft Auto Online, strong demand for NBA 2K17 -- which is now our highest-selling sports title ever -- and increased recurrent consumer spending.

In other developments during the quarter, the company acquired Kerbal Space Program from independent developer Squad. The critically acclaimed game is a hit with both consumers and critics, with a Metacritic rating of 88 and a Steam score of 97%. This is a continuation of the company's strategy of adding highly rated titles to its growing portfolio of games. Earlier this year, the company acquired SocialPoint in a bid to enter the growing mobile game market, with its extremely successful free to play titles Dragon City and Monster Legends.

The company is looking forward to the expected launch of the NBA 2K eSports League in 2018, its joint venture with the NBA, and the first official competitive gaming league that is jointly owned by a US professional sports league. With 17 teams signed on and a schedule coming in 2018, the company believes this will be a meaningful contributor to profit in the future -- but pointed out that while Take-Two has high hopes for its venture into esports, it has included no financial impact in its forecast. 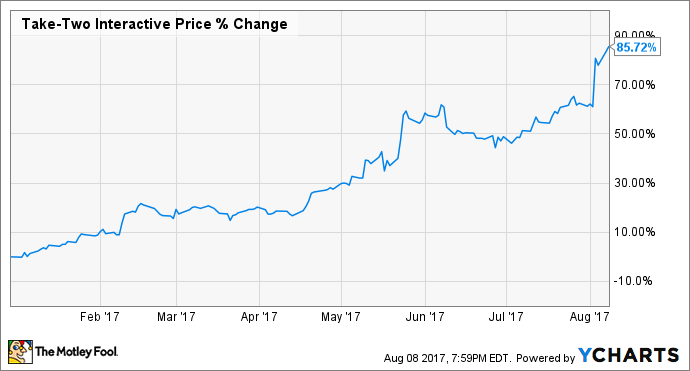 The future's so bright I gotta wear shades

The company is now expecting its fiscal 2019 (which begins in April 2018) to be a record year for the company, led by the release of Rockstar Games' Red Dead Redemption 2 and an unnamed "highly anticipated new title from one of 2K's biggest franchises," which may refer to the next installment of Borderlands, the division's best-selling game.

With multiple successful franchises, its diversification into mobile gaming, and a burgeoning opportunity in esports, Take-Two continues to take investors for a joyride.