German luxury-car maker BMW AG (OTC:BAMXF) has given us a preview of how it plans to respond to the disruptive threat posed by Tesla (NASDAQ:TSLA) -- and it's a unique strategy that could pay off big for the luxury-car giant.

But it's not without some risks. Let's take a look.

Here's the key assumption behind BMW's plan: Most or all vehicles will be electric, eventually -- but it's not yet clear when buyers will begin to demand electric vehicles in mass-market quantities. 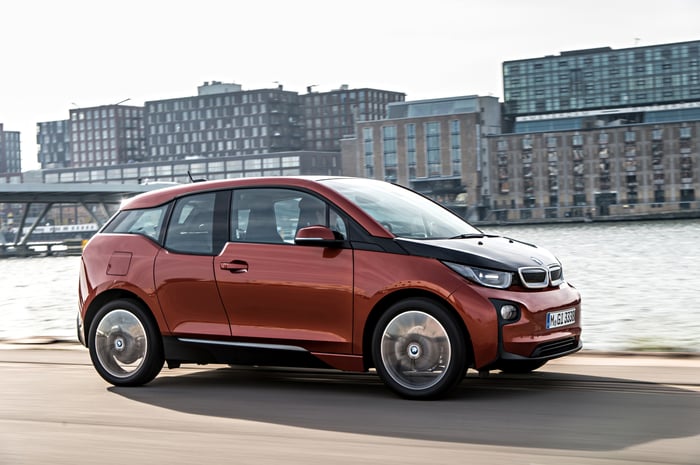 BMW is moving away from designs like the quirky electric i3. Future BMW electrics will be versions of its mainstream models. Image source: BMW AG.

So what's the plan? BMW is in the process of reengineering its entire product portfolio so that all of its vehicles can be offered with internal-combustion, plug-in hybrid, or fully battery-electric drivetrains. The idea is that BMW's production lines will be able to build all vehicles in all three configurations -- with the ratio varying as market demands change.

For a smallish producer like BMW, it's a strategy that makes good sense, at least on paper. But it raises a big question.

Here's that big question: Will the need to be able to build a given model in all three configurations introduce compromises that make it less competitive?

An all-electric BMW 3 Series could be a ferocious competitor to Tesla's Model 3. But BMW's plan raises the possibility that the car could be an awkward compromise dictated by the need to adapt its structure to gasoline engines as well.

It seems unlikely that any electric vehicle wearing a BMW badge will be less than very good. But getting there, in a way that preserves production flexibility and maximizes the number of shared parts between the different models, could take a lot of time and money.

That's the real concern. BMW CEO Harald Krueger said earlier this year that the short-term plan is to build more high-profit SUVs to help defray the costs of developing electric vehicles and related technologies like self-driving systems. But the bill could turn out to be steep.

What we know about BMW's electric-vehicle plans

BMW has said that this next phase of its electric-vehicle strategy will begin with its Mini brand. A battery-electric Mini is set to go into production in 2019. Battery-electric versions of the BMW X3 and 3 Series will follow, with the X3 expected to debut in 2020.

For now, the electrification strategy is centered at BMW's factories in Dingolfing and Landshut, in the German state of Bavaria. Those plants will build the electric Mini's drivetrains, which will then be sent to Mini's U.K. factory for final assembly. Dingolfing is also set to build plug-in hybrid versions of BMW's midsize 5 Series and large 7 Series sedans, and it will build BMW's upcoming self-driving "iNEXT" vehicle, which is set to debut in 2021.

Why it's important: BMW needs to respond to Tesla -- soon

We can argue all day over whether Tesla has been "disruptive" to the auto industry at large. Tesla has shown that electric cars can be cool and desirable, an important achievement -- but it hasn't exactly stolen a slew of sales from the likes of General Motors or Toyota, and it doesn't seem likely to do so any time soon.

But Tesla has made some big noise in one corner of the giant global new-car market: luxury vehicles. Tesla's big, fast, and expensive Model S sedan and Model X SUVs aren't racking up huge sales by mass-market standards, but they are racking up a whole lot of sales relative to similarly priced high-end luxury cars from -- you guessed it -- BMW and its German rivals, Mercedes-Benz and Audi AG.

That competitive pressure will soon ramp up as Tesla's Model 3 production line gets up to speed. That's why BMW (and its rivals) feel the need to respond aggressively, with electric vehicles that can go toe-to-toe (or better yet, outpace) the Silicon Valley upstart's offerings.

Will BMW's plan produce fully electric cars that can go head-to-head with Tesla? We'll find out.