President Donald Trump has proposed that the United States invest $1 trillion in infrastructure over the next decade, which would help fix our roads and bridges, as well as enable many other long-awaited projects to come to fruition. If infrastructure spending does indeed rise to the level Trump is pushing for, there are many publicly traded companies that could benefit tremendously.

Unfortunately, some of the stocks that I feel are the best ways to play infrastructure spending don't pay any dividends, such as United Rentals or Cliffs Natural Resources. Others, such as Martin Marietta Materials and Vulcan Materials, pay dividends but have yields of less than 1%. On the other hand, several of the best infrastructure stocks are great choices for income-seeking investors. With that in mind, here are three top dividend-paying stocks that could be major beneficiaries of an infrastructure spending plan.

Source: Google Finance. Share prices and dividend yields as of 8/9/17. 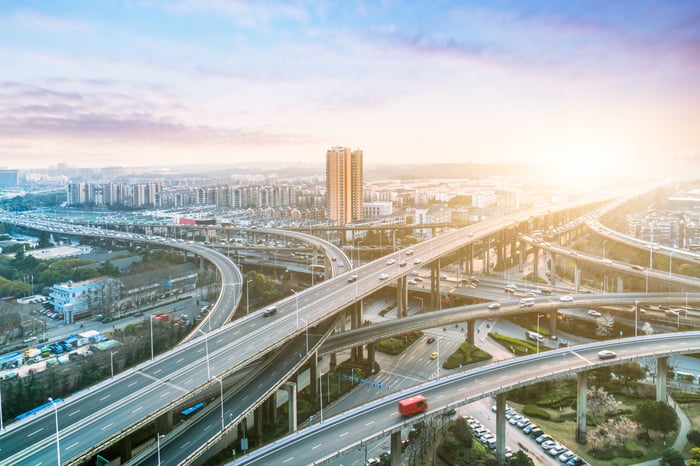 $1 trillion in infrastructure spending requires a lot of building equipment

Heavy equipment giant Caterpillar (NYSE:CAT) appears to be doing quite well lately. As my colleague Neha Chamaria recently pointed out, Caterpillar's retail machinery sales have grown nicely year-over-year, with strong improvement in all three of its business segments. In fact, the company just raised its full-year revenue and earnings guidance by a wide margin.

Caterpillar generates approximately half of its revenue from the U.S., so it's fair to say that a significant increase in infrastructure spending could further boost Caterpillar's profits. And if it takes a while for an infrastructure plan to materialize, Caterpillar should be just fine.

Temporary setbacks have put this engineering giant on sale

Fluor (NYSE:FLR) hasn't had a great summer – the stock is down more than 10% after reporting second quarter revenues that fell short of analysts' expectations, and the company also reduced its full-year guidance amid cost increases. Its backlog is also $3 billion lighter after the sudden cancellation of the V.C. Summer nuclear facility it had planned to build over the next several years.

However, this could be an opportunity to buy the stock at a discount, especially if infrastructure spending ramps up.

Since Fluor gets a significant portion of its revenue from government projects, it could be a big beneficiary of any plan that aims to rebuild America's infrastructure. In addition, although Fluor's backlog has shrunk a little, it still sits $37.6 billion, which should keep the company's profits flowing in the meantime, even if passing a comprehensive infrastructure plan takes longer than anticipated.

A steel company with a lot to gain from infrastructure spending

Steel giant Nucor (NYSE:NUE) has seen a surge in profit over the past few quarters, helped by strong steel demand and new tariffs that have discouraged foreign steel being dumped into the U.S. market. In fact, as my colleague Jason Hall recently reported, Nucor just reported its most profitable six months since before the Great Recession. Revenue increased by more than 25% year-over-year, and earnings more than doubled.

As far as infrastructure spending goes, Nucor could be the big winner among the major steel stocks. Credit Suisse said earlier in 2017 that Nucor has the most exposure to infrastructure markets, and if a major infrastructure program does happen, it could mean significant earnings growth for the company.