As a shareholder of Micron Technology (NASDAQ:MU), I know of one risk that keeps me on my toes. This is the one issue that will eventually move me to sell my Micron shares, and I keep an eagle eye out for early signs of its arrival.

In a nutshell, Micron is soaring due to high and stable street prices on its memory chips. But it's a highly cyclical market, and Micron shares will come crashing down if, and when, the next sectorwide price war starts. 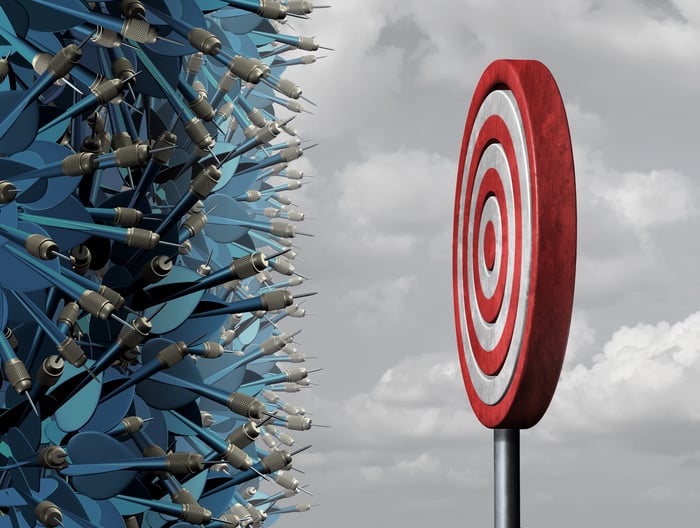 The computer memory-chip market is notorious for its drastic cyclical swings in either direction. In the past, intense price wars have been followed by periods of stable chip prices where the survivors absorbed their bankrupt peers.

The latest upswing started in the summer of 2016. Micron's trailing sales bottomed out at $12.4 billion, and operating margins dwindled down to 1.4%. Sector giant Samsung Electronics (NASDAQOTH: SSNLF) was flooding the market with torrential volumes of low-cost chips, pedal to the metal in every memory factory. Both DRAM and NAND chip prices crashed hard in 2016, and Micron investors felt the pain.

Falling chip prices are a fact of life in this market -- over the long run. Consumer demand for memory-equipped gadgets always seems to be on the rise, and manufacturers can keep the price tags low by tweaking and developing their production processes. But this is something else.

This is Samsung making a conscious decision to change the supply-and-demand calculation overnight. Other parts of Samsung's diverse operations would surely make up for whatever money was lost to low-cost memory sales, so let's turn up the production lines to "11" for a while, shall we?

When Samsung pulled back its memory production volumes, average selling prices started rising almost immediately. Today, unit prices of many popular NAND and DRAM chips have bounced back from that year-ago trough with gains of 40% or more. Rising memory-chip prices are as rare as unhappy endings in Hollywood movies, but these higher levels have held remarkably steady since last October.

Micron's trailing revenues are sitting at a much healthier $17.4 billion right now, with operating margins north of 19%. Share prices followed suit, bouncing 180% higher from the lowest point in 2016. And these price gains are resting on solid financial results -- Micron shares are selling at just 12.8 times trailing earnings now.

The big, bad risk here is, of course, that another huge price war begins. Chip prices would plunge again, taking Micron's sales and profits along for the ride. Share prices wouldn't be far behind.

I'm looking for signs of the next cyclical downturn in several ways. Comments on chip pricing in Micron's own earnings reports are helpful. Other companies can offer similar guidance, albeit from different angles. The last few rounds of industry consolidation left Micron standing almost alone as a pure-play memory-chip supplier, alongside South Korean peer SK Hynix.

Samsung remains the largest player in this market, with nearly a 45% market share in the DRAM sector, followed by Hynix at 29% and Micron with 21%. These are the companies with enough heft to actually move chip prices by increasing or limiting their production volumes. Samsung is too big and diversified to spend much time on memory prices in its earnings reports, and SK Hynix can be tough to follow.

It can be helpful to look at markets right outside the actual memory chips. For example, Silicon Motion (NASDAQ:SIMO) is a leading supplier of memory controllers for solid-state storage devices, from smartphones to large-scale SSD drives. High memory-chip prices are good news for Micron, but bad news for Silicon Motion, since that company would prefer copious volumes of memory chips in need of controllers to manage their data flows. This company keeps track of pricing trends, just from the other side of the same coin.

In other news, you might find announcements that one of the key memory companies is building new memory production lines, or altering an existing factory to produce a different type of memory chip, or moving a facility into a totally different kind of manufacturing. These things do happen, and can be very early indications of upcoming shifts on the supply side.

Likewise, let's say that SSD storage suddenly fell out of favor due to some miraculous improvement in traditional hard-drive technologies. That unlikely event would put the brakes on memory-chip demand, triggering an oversupply situation from the other side of the old supply-and-demand balance, and do bad things to Micron and Hynix.

This is the thing Micron shareholders need to look out for.

Why I'm not selling Micron today

So far, so good. That's the long and short of it.

Memory prices remain incredibly stable, and I've seen no signs of another price war. Memory keeps improving, Samsung is still releasing fresh memory products, and the market remains competitive -- but that's all within the completely normal framework of a healthy memory industry.

There's a microscopic chance that the cyclicality has been washed out of the memory industry, at least in part. Heavy consolidation may have created a stable system of leading suppliers -- Samsung, SK Hynix, and Micron -- who have little or no interest in running through another oversupply gauntlet. If so, I might end up holding my Micron shares for a very long time.

Let's not get too comfortable with this super-stable memory market, though. The next downturn could hit quickly, and I do expect to miss the actual top of Micron's long-term chart, even in my wildest dreams. I'm keeping a close watch on this huge risk factor, and so should you.