Fall is fast approaching, which means it's almost time for the return of the eighth season of The Walking Dead, TV's highest-rated show in the key 18-49 advertising demographic. Those who've bet on AMC Networks (NASDAQ:AMCX) stock are betting the show continues to attract viewers, advertising dollars, and rich licensing deals.

But there's also a lot more to the upstart network than TWD and its less-popular spinoff, Fear The Walking Dead. Here are five things every investor should know that I picked up during the second-quarter earnings call, thanks to comments transcribed by S&P Global Market Intelligence. 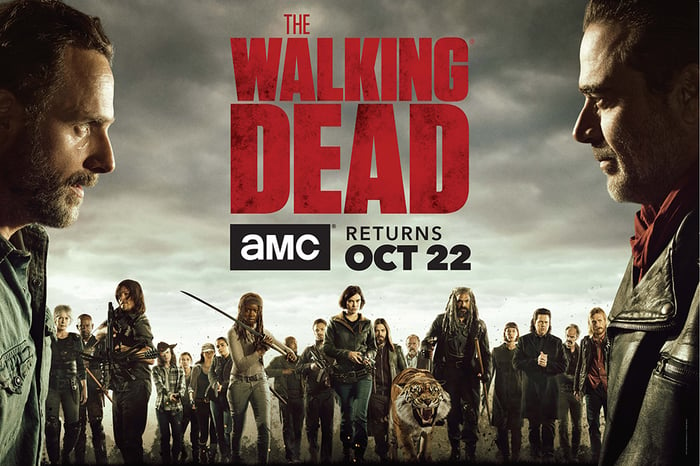 Eight seasons in, The Walking Dead is still the single biggest catalyst for AMC Networks stock.

1. Debt is still an issue, but it's becoming less of one

If there's a knock on AMC, it's the $2.7 billion in debt the company carries on its balance sheet. And yet the burden may be lightening. Management is incrementally paying down debt while looking for opportunities to refinance existing obligations and reduce interest payments.

AMC Networks Chief Financial Officer Sean Sullivan had this to say during the call:

In July, we also took advantage of the interest rate environment to refinance a portion of our debt and strengthen our liquidity position by issuing $800 million of [4.75%] notes that mature in 2025 and extending the maturity date of our term loan to 2023.

2. How do you spell opportunity? MVPD

AMC isn't betting its business entirely on the cable channels. Increasingly, CEO Josh Sapan said, the company finds itself negotiating with "virtual" multi-channel video programming distributors (MVPD) that serve consumers directly via the Internet. He named YouTube TV as one his network is already working with. He also expects continued demand for content from virtual MVPDs and their more traditional peers.

[We] have maintained round numbers ... a year of delay before content goes from the linear window to an SVOD, third-party SVOD owned service. And that has been I think a reasonably good pattern to pursue, that has put us in reasonably good state [with] our current MVPD partners and has had some beneficial effects, frankly, on exposure, awareness and attention to our series and has also maximized economics and allowed us to step up our studio content investment from what was several years ago -- one show, to today, more than a dozen that are in production around the world that we're the beneficiary of [in terms of ownership] rights.

3. AMC wants some of its Mad Men magic back

Just like every other studio, AMC tries to reduce risk by funding known concepts and backing proven creators. So it's no surprise to see the network inking deals with creators with whom it's had a prior relationship. Sapan explained:

Last week, we greenlit a new series we're extraordinarily excited about called Dietland from Marti Noxon, who is a prolific writer/producer, and we think one of TVs smartest and sharpest voices. Her work spans from Mad Men and Buffy the Vampire Slayer to Girlfriends' Guide to Divorce and UnREAL. We're keenly aware that our success is driven by the talented people we're able to work with and we're thrilled to welcome Marti back to AMC.

4. It's not entirely about original series...

While original programming across all of the AMC channels -- from AMC proper to IFC, Sundance, and WE tv -- is performing well, there's still money to be made licensing programming from time to time. In the most recent quarter, AMC Networks struck a deal with Amazon.com Studios to begin airing the award-winning drama Transparent on Sundance.

"We're quite pleased that Amazon chose to partner with SundanceTV for the linear TV premiere of what we think is an important award-winning series," Sapan said. Translation? AMC got a good enough deal that it made economic sense to add the show to its bundle. Cable companies buy network bundles to package up for consumers. Anything that improves the watch-ability of the lower-tier channels in the bundle -- Sundance, in this case -- increases the scalability of the overall portfolio.

5. ...but owned series are a big piece of the investor story

AMC derives the vast majority of revenue from what it calls its National Networks group, which is responsible for U.S.-based programming and distribution and collects advertising, affiliate revenue (i.e., payments from cable and satellite providers, as well as virtual MVPDs), and what amounts to royalty payments for syndicating owned shows on other networks. AMC calls this last piece "nonaffiliate revenue," and it's an important part of the business.

"Nonaffiliate revenue continued to be a significant contributor to top line growth with year-over-year growth in excess of 20%," Sullivan said. "The increase was due principally to the licensing of our scripted original programs in various ancillary windows, most notably, Fear the Walking Dead, Into the Badlands, and Preacher." Translation? More network operators like our stuff, and they're paying us for access.

Combined, I'd say these points help to explain why the stock has rallied just over 15% over the trailing 12 months and 20% in July alone. Also, at 9.2 times earnings estimates compiled by S&P Market Intelligence, AMC Networks trades for less than half the premium of its closest peer -- Lions Gate Entertainment, at 24.4 -- and within spitting distance of slower-growth plays such as Discovery Communications and Viacom. Keep an eye on this stock, especially if any of the non-TWD shows start taking off like Breaking Bad did.