Please ensure Javascript is enabled for purposes of website accessibility
Log In Help Join The Motley Fool
Free Article Join Over 1 Million Premium Members And Get More In-Depth Stock Guidance and Research
By Maxx Chatsko - Aug 12, 2017 at 10:32AM

The water stock owns a stable business, but the particular way it makes money will likely dictate the pace of future growth.

At a market cap of $14.6 billion, American Water Works (AWK 0.36%) is the largest publicly traded water utility. The water stock pays a respectable dividend yielding 2% and has rewarded buy-and-hold investors with consistent returns in the last decade.

Investors may have also noticed that American Water Works plans to significantly step up its investment in water infrastructure in the coming years, and may spend as much as $40 billion in the next 25 years. How can it commit such enormous sums of money to capital expenditures?

To answer that question, we'll need to explore how American Water Works makes most of its money. 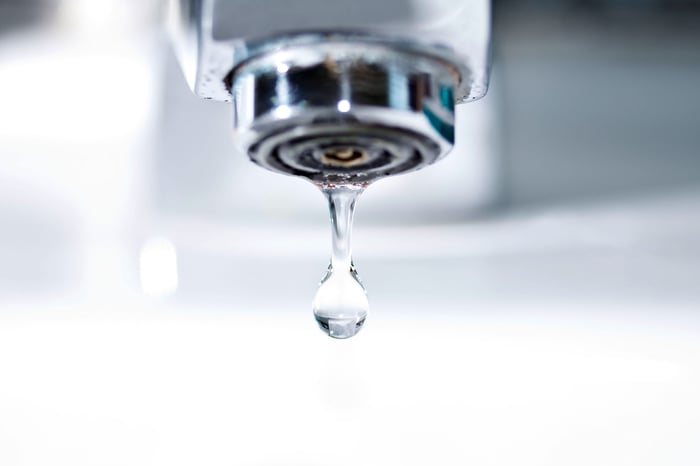 Many utilities, whether they provide electricity or water, operate within rate regulated environments. The idea is that residential customers will be protected against shocking rate increases in a short period of time. It also provides a mechanism for utility companies to ask regulators for rate increases that allow for a specified return (and qualify for federal financing to smooth out large capital expenditures of their own). These are often justified by demonstrating investments made since the last rate filing and revealing investments the utility plans to make to continue modernizing distribution infrastructure.

While regulated utility markets are often accompanied by slower rates of business growth, that growth is reliable and predictable. That allows American Water Works to consistently grow revenue, profits, operating cash flow, and dividend distributions. Additionally, acquiring new business in regulated markets can expedite growth by adding customers to the network. Slow growth is not a bad trade-off if the strategy is properly managed.

That's why American Water Works concentrates operations in regulated markets. Take a look at the breakdown for operations through the first half of 2017:

The water utility generated nearly 88% of its revenue and 94% of its net income in the first half of 2017 from regulated business, which accounted for 89% of total assets.

Of course, American Water Works has to keep up its end of the bargain to "earn" rate increases from regulators in select regions. That will require capital expenditures of $5.9 billion between 2017 and 2021 broken down into the following categories:

Some of the nearly $6 billion to be invested will be from low-risk federal financing, but most will come from operations. This level of spending will strengthen future requests for rate increases by American Water Works, which occur roughly every four years (the next batch of rate filings will come in 2021). It will also increase the efficiency of water distribution infrastructure and therefore lower future operating costs for the company.

American Water Works is able to invest billions in water distribution infrastructure improvements while increasing profits and dividend payments by focusing most of its operations in rate-regulated markets. It allows for consistent and reliable performance and growth, albeit with the trade-off of slower growth. That also means many water stocks are relatively expensive, but sometimes less risky investments come at a premium.