Aqua America (NYSE:WTRG) is one of the largest publicly traded water utilities on the market. The water stock is up 14% in 2017 and has a history of delivering returns to shareholders over the long haul. The gains have been deserved, too.

Revenue, income, and operating cash flow have steadily risen nearly every year. Being a cash cow has other perks: management has increased the quarterly dividend 27 times in the last 26 years. The water utility has no plans of stopping anytime soon. In fact, it plans on investing more than $1.2 billion into water distribution infrastructure between now and the end of 2019 to boost operating efficiency even further in the years ahead.

How is that possible for a company that generated $820 million in revenue in all of 2016? To understand that, we need to take a closer look at how Aqua America makes most of its money. 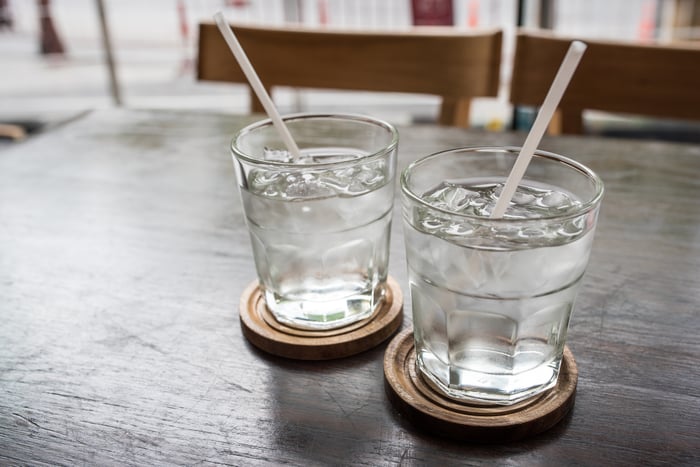 Most water distribution networks in the United States are rate-regulated environments. That means water utilities such as Aqua America need to gain government approval for prices charged to residential customers. To earn rate increases, a company usually has to demonstrate investments made to improve and maintain network reliability.

On paper, rate-regulated markets help to protect the economic interests of citizens and shift the headache of water distribution infrastructure investments from the government to private companies. (Then again, close to half of all funding for water infrastructure improvements comes from low-risk federal loans.) Critical infrastructure is maintained, and companies are incentivized to lower their operating costs to make rate increases more profitable. It's not always perfect, but it works well enough.

So, although there are places where water distribution is provided at market rates (unregulated), water utilities have it pretty good sticking to rate-regulated markets. Why? It provides a reliable and consistent way to grow a business for the long haul. That explains why Aqua America generated 99% of all revenue in the first half of 2017 from regulated business.

To be fair, the water utility is a little more concentrated in regulated markets than some of its peers. For instance, the larger American Water Works generated 88% of revenue and 94% of net income from regulated business in the first half of this year. But there's a simple reason for going all-in on this strategy.

Aqua America wasn't finding the potential for higher growth rates from market-based activities to be worth the volatility. In 2015, it generated $35 million in revenue from non-regulated markets, but was losing money from those operations. After divesting most of its assets in the area, the plan for 2017 calls for generating only $4 million in revenue and realizing positive net income.

And why not? Full-year 2017 guidance expects rate base growth of up to 7% and customer growth between 1.5% and 2% compared to last year. Put it all together, and Aqua America owns a (slowly) growing business that enjoys healthy amounts of profits.

As with many utilities, Aqua America generates a substantial amount of its business in rate-regulated markets. While that often comes at the expense of faster rates of growth, it provides a relatively low-risk investment. However, investors often pay a premium for that safety, which helps to explain why water stocks are a bit expensive on the whole. Then again, there are worse things than steady returns and a dividend yielding 2.4%.

How Aqua America, Inc. Makes Most of Its Money @themotleyfool #stocks $WTRG Next Article
Current