Ask investors a year ago if they thought Lions Gate Entertainment (NYSE:LGF-A)(NYSE:LGF-B) could thrive financially without having the Hunger Games franchise act as a tailwind, and you'd probably have found more skeptics than optimists. Fast-forward to Aug. 8, when Lions Gate reported a 16% year-over-year increase in movie-group revenue. Division operating profits tripled over the same period. No wonder the stock is up 22% over the trailing 12 months.

Lions Gate's film portfolio is performing well even as the 2017 box office hasn't been kind to some big studios. For example, Walt Disney's (NYSE:DIS) U.S. theatrical ticket sales were down over 31% through the weekend. 21st Century Fox's (NASDAQ:FOX)(NASDAQ:FOXA) receipts are down 13% over the same period, while Time Warner's (NYSE:TWX) Warner Bros. needed a boost from Wonder Woman to eke out a 2.3% increase over last year's haul through mid-August.

Yet Lions Gate's story doesn't begin and end with fiscally responsible filmmaking. Here are five things every investor should know that I picked up during the fiscal first-quarter earnings call, thanks to comments transcribed by S&P Global Market Intelligence. 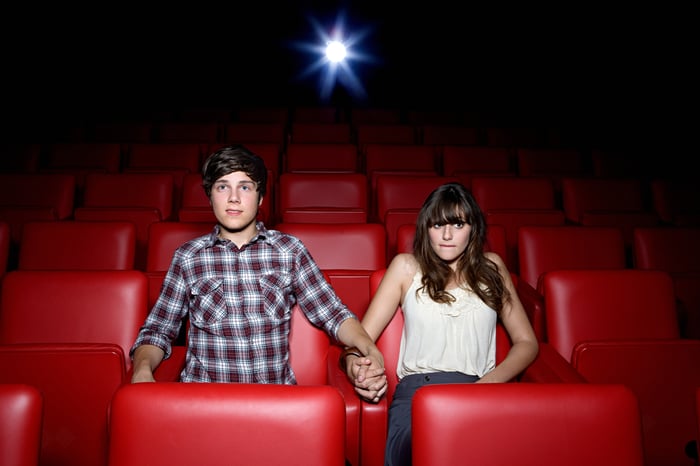 For Lions Gate, a bet on quirky romance and genre themes is still paying off. Image source: Getty Images.

1. Deleveraging is happening faster than expected

Lions Gate used big chunks of debt to help pay for its $4.4 billion acquisition of Starz, which closed in December. Investors thinking the company wouldn't have the capital to repay that debt quickly were, well, wrong. Total debt on the balance sheet is down over $700 million in just one quarter, S&P Global Market Intelligence reports. A fat payout from its sale of Epix aided the payoff.

"When we first announced the Starz deal, we discussed leverage of 5 to 5.5 [times] our legacy metrics, adjusted EBITDA at the close," CEO Jon Feltheimer said in comments made the during the earnings call. "Today, we have delevered substantially and achieved our anticipated leverage range of 3.5 to 4 [times] adjusted EBITDA in just six months, rather than the 12 to 18 months originally forecast." [https://www.capitaliq.com/CIQDotNet/Transcripts/Detail.aspx?keyDevId=531145112&companyId=30864]

2. Get ready for the "John Wick Universe"

In its latest bid to be more like Disney, Warner, Fox, and others building franchises that can span multiple films and media sources, Lions Gate is aiming to expand and extend its so-far successful John Wick narrative. Over two films, the high-spirited action series starring Keanu Reeves has grossed $260.3 million worldwide on an estimated combined production budget of $60 million. Continued performance at that level or better would pay off nicely for Lions Gate.

"We fast-tracked the development of John Wick 3, and have a premium television series, a mobile game, and location-based entertainment properties in the works," Feltheimer said. "We're planning to grow the John Wick cinematic universe as well. To that end, we're developing an exciting related property titled The Ballerina, a film showcasing a female assassin that we will spin out of the franchise."

Because motion pictures tend to be a huge driver of operating profit, Lions Gate is planning to take fewer risks at the theatrical turnstiles. Expect the studio to dust off a few old names to keep profits pushing forward this fiscal year and next.

"Early next year, Robin Hood, produced by Leonardo DiCaprio, offers a totally fresh spin on a classic adventure story featuring one of the hottest casts in Hollywood with a great performance by Taron Egerton, breakout star of Kingsman," Feltheimer said. "The eighth installment of Saw brings back Jigsaw at Halloween."

Two weeks ago, we announced Lions Gate's first post-merger addition to the Starz lineup, a unique co-production with strategic partner Liberty Global on The Rook. Acclaimed producers Stephen Garrett is serving as a show-runner, and Twilight creator Stephenie Meyer as executive producer. The Rook will air on Starz in the U.S. beginning next year.

But is the expanding TV slate and an improving movie business good enough reason to buy Lions Gate? That depends on how you value the business. At 25 times anticipated earnings for the next 12 months, the stock is trading for a premium to its most direct peers. Evidence of the studio's ability to execute on the potential that premium assumes is key to cashing in -- both in the ratings and at the box office. I'll be watching both.