The housing market has been on the upswing for a couple of years now, and PulteGroup's (NYSE:PHM) most recent earnings report was confirmation that housing is still on the rise. Every metric you would want to see -- new orders, backlog, average selling price -- was up compared to the prior year, and the company has a significant foothold in some of the hottest real estate markets in the U.S.

After a positive streak this long, one does have to wonder if the housing market has any legs left. According to Pulte's management, there is still plenty of room to run. Here are a few quotes from the company's most recent conference call that show these positive market trends and how Pulte wants to approach the housing market over the next few years. 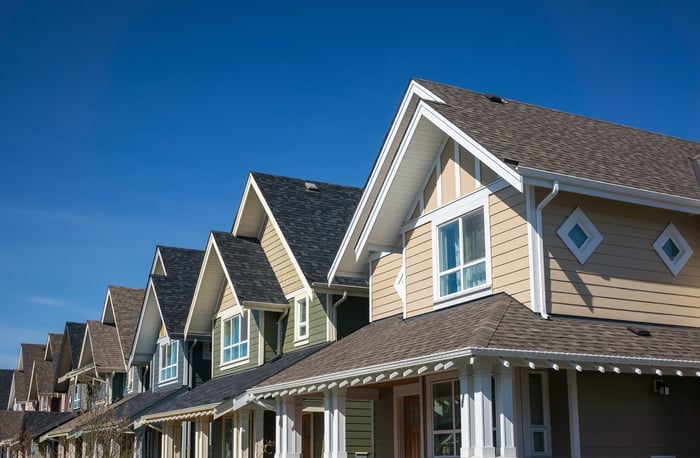 Back to pre-crash levels (at least in this one metric)

It's going to be a long time before we see homebuilders return to pre-housing crisis highs. In fact, you could argue that we will never get back there. According to CEO Ryan Marshall, though, Pulte has achieved at least one pre-crash metric.

We are seeking to grow intelligently, which I believe we're demonstrating as evidenced by the 140 basis point increase in ROE [return on equity] to 12.8% that we realized for the trailing 12 months. And with the backlog at $4.5 billion, our highest in a decade, I might add, we are extremely well positioned to continue delivering strong operating and financial performance going forward.

The fact that Pulte has such a large backlog is more a sign that the company is growing its market share than anything else. One of the byproducts of the housing crisis is that there are fewer homebuilders, and the ones still around are the big fish. A more consolidated industry is likely playing a part in those higher rates of return as well.

The stars are aligned for housing right now

According to Marshall, the economic conditions are very favorable to homebuilders and the housing market in general:

With the low interest rate environment helping first-time buyer demand, along with supportive economic and demographic trends, we're positive on housing demand over the near and mid-term. We fully appreciate, however, that the economic and housing recoveries are getting long by historic standards, so we remain disciplined in how and where we're investing our capital and how we run our operations day to day.

Perhaps that last comment is the most interesting one. Like those investors watching the stock market, there is this feeling that the recent rally feels a little long in the tooth. Perhaps that mentality is simply a reaction to the Great Recession and the idea that things can't get better forever. At the same time, though, that kind of mentality from Pulte and its peers could be the very thing that keeps this positive trend going for a while longer.

Consider this: The most recent data on U.S. housing starts shows that we're still below the 50-year historical average of 1.43 million. Even though we have been well below the average rate for several years, Pulte and other homebuilders are resisting the temptation to grow too quickly. 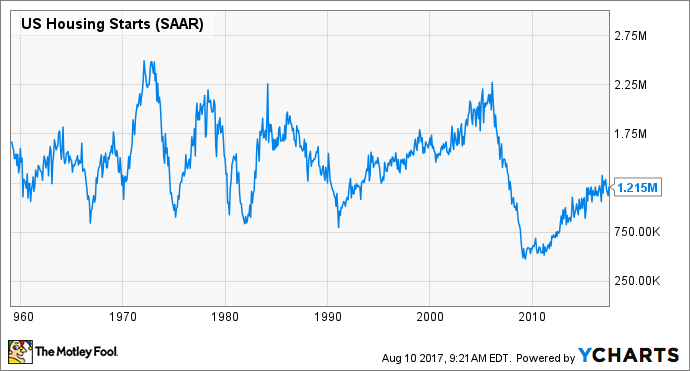 Perhaps keeping a skeptical eye on the future is ultimately a good thing for homebuilders in the long run.

The profitability of homebuilders is largely dictated by the target market for those homes. Pulte's most profitable segment is its move-up and luxury market. Those are the people looking to upgrade to a larger house versus first-time buyers or entry-level houses.

Of course, analysts are going to ask about the sales mix and the markets with the greatest opportunity. Here's what Marshall had to say:

As we entered into the recovery two or three years ago, as I commented in my prepared remarks, that strategy really led us to more investment in the move-up buyer and, look, I think today's results are reflective of how beneficial that's been to our overall business profile, but as we move forward and today as the market continues to recovery, we're seeing opportunities to serve all buyer groups. And not only is buyer behavior reflective of that, the returns that we can underwrite to are supportive of that as well.

The company's results confirm this as well. Total new orders for move-up and luxury homes were up 21% compared to this time last year, whereas orders were up 6% for first-time buyers and 6% for active adults -- the industry's polite way of saying housing communities for older and retired people.

What needs to change?

It's been a little over a year since Marshall took the reigns as CEO of Pulte, which has given him time to take stock of the situation and determine how the company has progressed with implementing his plan. When asked about what kind of progress he has seen and where Pulte can improve, here's what he said:

We made a giant step with the announcement of the changes that we intended to make to our overall land portfolio in moving through some long-dated assets that frankly just didn't fit within our portfolio and weren't aligned with our current strategy. So, harvesting that cash and redeploying it into high returning projects, I think, is going to be a great step for the organization as well.

I'd like to see us be a little more balanced in the consumers that we're serving. We're making nice progress in that. I like the traction that we're getting. We've seen a slight uptick in the number of first-time and entry-level projects that we're able to invest in, which are being supported by the returns. So, everything is coming together on that front.

As good as the move-up and luxury market has been for Pulte, it has made clear in its investor presentations that the millennial generation is its next target market. The age group is in the target range for first-time buyers (18-35), it's the largest age group in the country, and the employment trends for the group have been steadily increasing for the past eight years.

Also, the lower amount of land holdings is in line with Marshall's outlook for the market. The "three and three" mix means owning three years' worth of development land and options to buy on another three years' worth. This is below the company's average land inventory, but it closely relates to the idea of being optimistic about the short to medium term while remaining flexible for the long term. A smaller backlog of land makes for a lighter balance sheet and gives Pulte more options to assess the best market opportunities.

It's hard to find much fault with PulteGroup's approach to the housing market today. It has a footprint in some of the hottest real estate markets in the U.S. and wants to target the younger generation of first-time home buyers that are hitting the market. At the same time, it isn't tying up too much capital with development land several years down the road because the market isn't that good.

If the company can continue to ride this housing wave and generate a 12% return on equity coupled with a dividend and share repurchase program, then it's hard to find a reason to not like this stock at 14 times earnings.