Please ensure Javascript is enabled for purposes of website accessibility
Log In Help Join The Motley Fool
Free Article Join Over 1 Million Premium Members And Get More In-Depth Stock Guidance and Research
By Jeremy Bowman – Aug 14, 2017 at 6:36AM

After years of waiting, Disney finally announced a streaming service, but it may be too late.

After more than five years of lockstep gains, Walt Disney Co (DIS -0.75%) shares have been flailing ever since the company acknowledged that its cable business, its biggest profit engine, was in trouble. CEO Bob Iger noted "some subscriber losses" at its cash-cow, ESPN, two years ago and the stock has struggled to recover since. 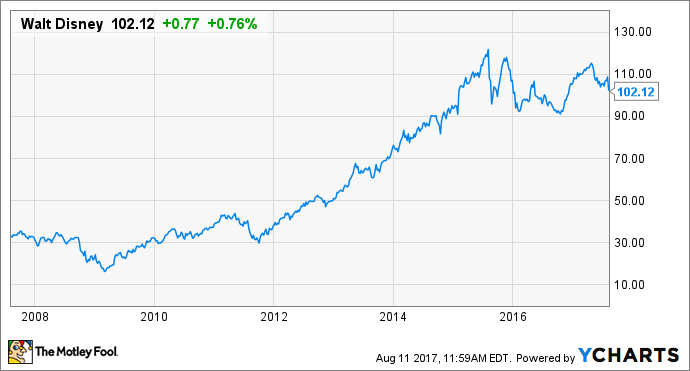 It was clear then that the world's largest entertainment company was slowly succumbing to the cord-cutting phenomenon. Video streaming, the disruptive innovation unleashed by Netflix (NFLX 1.39%) that allowed Americans to enjoy a smorgasbord of TV shows and movies without a traditional cable subscription has gradually chipped away at the pay-TV model. Netflix was initially dismissed by rivals, but its influence has carried across the entertainment industry. 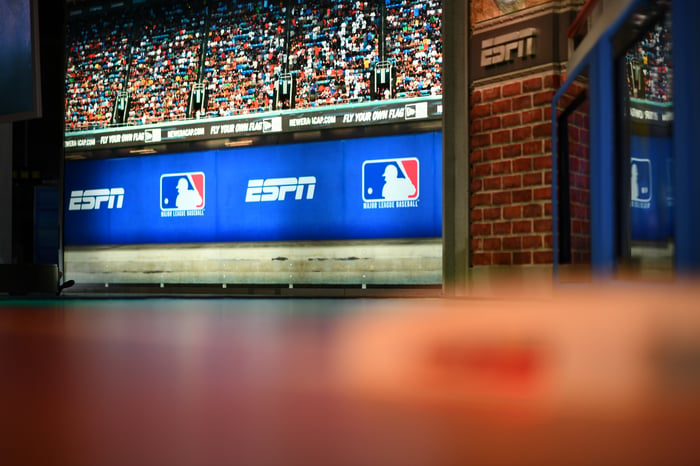 Even Time Warner's (TWX)HBO was quicker to understand the importance of streaming than Disney. HBO launched its streaming-only HBO Now service in March 2015. Disney meanwhile paid lip service to the idea, repeatedly saying it would launch a streaming service when the time was right. In 2016, it took a stake in Major League Baseball's BAMTech, paving the way for future streaming. But it wasn't until last week that the company went all-in on streaming. Disney announced that it will launch an ESPN-branded video streaming service that will be followed by a Disney-branded streaming service in 2019. As a result, Disney will end its agreement with Netflix to stream new releases on that platform.

The Innovator's Dilemma, the seminal book on strategy by Harvard Business School professor Clayton Christensen, has several insights. Among them is that incumbents such as Disney struggle to adapt to disruptive innovation.

Often, the incumbents simply have too much to lose by undercutting their existing model, and therefore allow scrappy upstarts, which don't have to show immediate profits to build out a customer base, to grow until they are directly challenging the incumbent. Disney and Netflix appear to be a classic example.

There's no denying the strength of the cable business. Even today, Disney's Media Networks segment has operating margins of about a third, but operating income is down 11% on flat revenue through the first three quarters of this fiscal year. As customers go elsewhere for entertainment, Disney is losing money. ESPN has been losing subscribers for six years as they've fallen from 100 million in 2011 to less than 88 million today.

In that time Netflix has gone from about 20 million streaming subscribers to more than 100 million, and Amazon.com (AMZN -0.54%) has built a formidable streaming business as well. Netflix now appears to be challenging Disney for entertainment supremacy as it reaped nearly 100 Emmy nominations this year and is churning out an unprecedented amount of content. The two stocks have also gone in opposite directions. 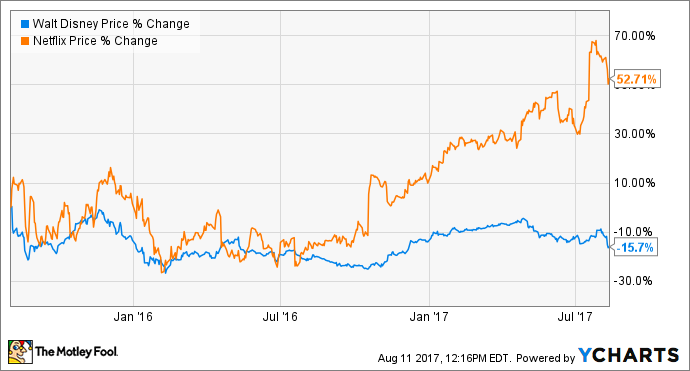 Will the streaming move pay off?

Not all industry disruptions are preventable. One-hour photo shops once dotted American streets and Eastman Kodak was a titan of the Dow Jones Industrals, but digital cameras and smartphones made film obsolete. There was little Kodak and its peers could do about it. The change in video entertainment has been slower, though it's hard to doubt Netflix CEO Reed Hastings' contention that internet TV will grow every year for the next 20 years, while regular TV will recede.

Disney finds itself on the right side of that equation with its latest announcement, but the decision may be too little, too late for investors. There's no question, for instance, that ESPN has lost cultural relevance. Its flagship show SportsCenter once had an essential monopoly on sports highlights, but that's changed as scores and highlights are now readily available on smartphones. The network was forced to layoff 100 employees earlier this year as it adjusts to changing times.

Disney is a strong enough brand that it should be able to attract an audience to its streaming service, but it's up against steep competition that will only grow in the intervening time before the company launches its service.

Investors responded to Disney's streaming news by sending the stock down 4%. At this point, it's not enough to save the flagging stock.