Snap (NYSE:SNAP) fell short of Wall Street's expectations with its second-quarter earnings results. Its top line came in at $181.7 million, while analysts, on average, were expecting $186.2 million.

Many point to the slow user growth as a big reason Snap missed. Pressure from Facebook (NASDAQ:FB) has caused user growth to slow considerably over the last year. Snapchat added just 7.3 million new daily active users to reach 173 million. Most expected a bit more, with the consensus being around 175 million daily average users for the quarter. For reference, Snapchat added 21 million new users in the second quarter last year.

But even 2 million more users would have left Snapchat short of revenue expectations because of a much more concerning result. Snapchat's average revenue per user (ARPU) fell short of expectations, as well.

Snap is having trouble increasing the monetization of its existing users

Average revenue per user, or ARPU, came in at just $1.05 for the second quarter. Analysts were expecting $1.07.

What's most surprising is that ARPU failed to surpass the levels of the fourth quarter. Snap's management explained this away by pointing to seasonality, but a company in such early stages of monetization shouldn't be experiencing such significant seasonality. That's expected from more established advertising companies like Facebook. Indeed, Facebook's ARPU for the second quarter was just 98% of its fourth quarter ARPU. 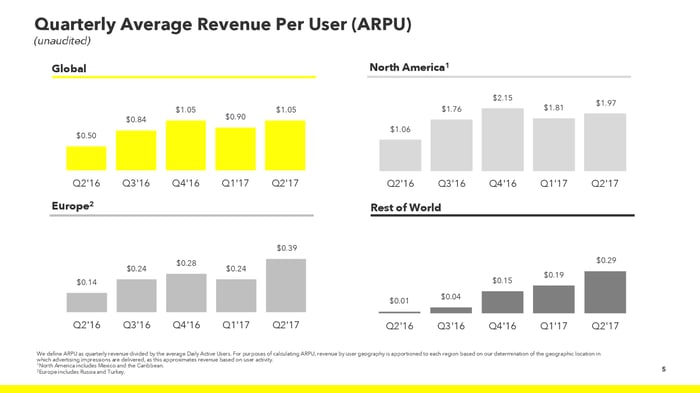 North America is definitely Snap's most mature market, but it's still been less than three years since it sold its first ad.

Snap's other geographic regions showed strong progress in improving ARPU. But the majority of Snapchat's user growth came from the United States and Canada last quarter, and North America still accounts for over 40% of total users.

Management had an explanation for why Snapchat's ARPU was disappointing, but it didn't exactly connect the dots for investors. (Don't worry, that's why I'm here.) While Snap successfully increased ad impressions for users, ad prices fell. That's the result of Snap moving toward more auction pricing through its API and self-serve platform.

Management expects ad pricing to bounce back as it gets more advertisers to participate in the auction. It's been giving out coupons to attract advertisers to its automated system. Management says it's producing great ROIs for its advertisers through the auction, and that should enable it to see higher ad prices as it brings in more ad dollars.

That said, Snap's still competing with Facebook and Instagram for ad buyers' attention. And the one thing that attracts big ad buyers is a lot of users. As such, Snapchat's inability to grow users will also put pressure on its ability to grow revenue per user. That's why the rich keep getting richer in digital advertising, and Snap and other smaller players are all fighting to win a smaller piece of the pie.