Shares of Italian-American automaker Fiat Chrysler Automobiles (NYSE:FCAU) surged on Monday after reports emerged that one or more Chinese automakers may be working to acquire the company. As of 3:30 p.m. EDT, FCA's shares were trading at $12.62, up 8.7% from its closing price on Friday.

Automotive News reported early on Monday morning that at least one Chinese automaker has made an offer for FCA, and several other Chinese automakers may have interest in purchasing all or part of the company. 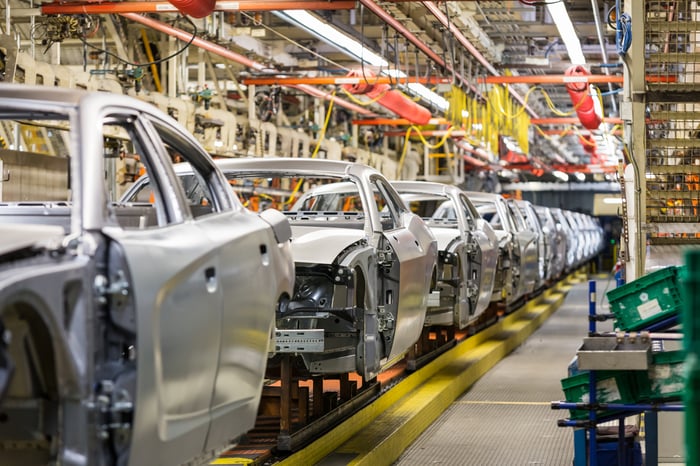 A purchase of FCA would give a Chinese automaker a major manufacturing footprint in North America and facilities around the world. Image source: Fiat Chrysler Automobiles N.V.

The offer, which was at a small premium over FCA's then-current market value, was rejected by FCA's board because it wasn't high enough, the publication said. According to the report, it appears that at least one other large Chinese automaker is conducting due diligence on the company and may make its own offer.

It's not clear yet which Chinese automakers are interested. It appears that several have at least kicked FCA's proverbial tires. Of note is that the Chinese government has recently been urging big Chinese companies to invest in foreign companies.

From a Chinese perspective, FCA is probably the most appealing acquisition target among the major global automakers, with a strong global brand (Jeep) and a big and profitable U.S. operation. CEO Sergio Marchionne has been working to restructure the company to make it more attractive to a buyer. FCA has cut unprofitable sedan models, invested in an expansion of its SUV offerings, and is expected to roll out an all-new version of its highly profitable Ram pickup truck early next year.

The report said that a sale would likely include the Jeep, Ram, Dodge, Chrysler, and Fiat brands, as well as the associated factories and other facilities. The Alfa Romeo and Maserati brands would be spun off, as former FCA subsidiary Ferrari (NYSE:RACE) was in 2015, in order to keep them under the control of Italy's Agnelli family, the descendants of Fiat's founder.

The Automotive News report didn't have all the details we might like. But we should take it seriously: The reporter in question, Automotive News's Larry Vellequette, is a careful veteran with good sources. There's likely to be fire behind this smoke.

What's not yet clear is whether another offer will emerge that FCA's board will find palatable. If there's real interest, I suspect that more details will emerge over the next few days. Stay tuned.