Production of the slow-selling sedans will end so FCA can use its assembly lines to make more Jeeps and Rams, FCA's CEO says. Here's how that's likely to play out.

Doomed? Fiat Chrysler's compact Dodge Dart sedan might not be around much longer. FCA wants to use its factory to make more Jeeps instead. Image source: Fiat Chrysler Automobiles.

Fiat Chrysler Automobiles (FCAU) CEO Sergio Marchionne said last week that the company will stop making the Dodge Dart and Chrysler 200 at some point in the near future in order to use the cars' factories to make more SUVs and trucks instead.

A "permanent shift" away from sedans in the U.S.
Here's what Marchionne said during the company's fourth-quarter earnings conference call:

We have seen a significant shift in the product mix of cars being sold [in the U.S.] Part of this is been driven by continuing low gas prices, which -- certainly in terms of our forecast period -- we do not expect to see fundamentally change directionally.

There has been, in our view, a permanent shift toward UVs and pickup trucks [in the U.S. market]. And we have seen, certainly in terms of our ability to meet market demand, some severe restriction in terms of the dexterity of our manufacturing system to accomplish that end. 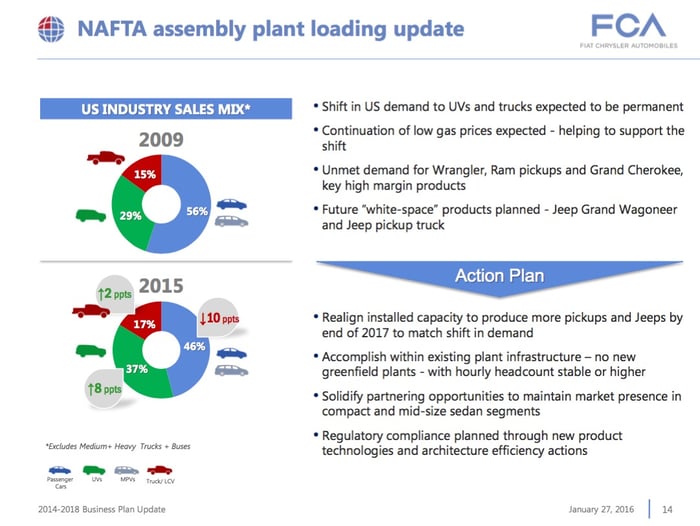 In other words, FCA has struggled to meet market demand for highly profitable products like its Jeep Cherokee and Wrangler. Several of its factories are running flat-out now, but the company feels it could sell even more SUVs and pickups if only it could make more.

Meanwhile, sales of FCA's mainstream compact and midsize sedans, the Dodge Dart and Chrysler 200, are lagging.

"And so, one of the things that we have decided to do is to effectively de-focus -- from a manufacturing standpoint in the U.S. -- to de-focus on the passenger car market. There are two cars in particular, the Dodge Dart and the Chrysler 200, which will run their course," he said (emphasis added).

FCA doesn't want to build more factories in North America in order to make more SUVs, because those factories could become high-cost burdens in the event of a downturn. But Marchionne wants to maximize the profitability of the factories FCA already has in North America while the market is favorable.

Marchionne went on: "Without creating additional capacity in the United States, we need to reutilize that plant infrastructure to try and deal with the development of both Jeep and the Ram brands."

So, what's really happening? And when?

How this is likely to play out over the next couple of years
When Marchionne and his executive team revealed the five-year plan for FCA back in 2014, they gave a lot of specific details about the company's future-product plans.

Marchionne didn't give specifics on the company's plans this time around. But he did drop a couple of hints. We learned in 2014 that Jeep is planning a new top-of-the-line model. The upcoming new Jeep Grand Wagoneer, due in 2018, is expected to be one step up from the brand's current flagship, the Grand Cherokee, in terms of size, luxury level, and price.

Production of the hot-selling Jeep Cherokee could move from Toledo to Belvidere next year. Image source: Fiat Chrysler Automobiles.

Marchionne didn't clearly come out and say it, but it sounds like the Cherokee will move to the FCA plant in Belvidere, Ill.,  that currently makes the Dodge Dart alongside the Jeep Compass and Patriot. (The Compass and Patriot are expected to be replaced by a single new Jeep model soon. It's likely the Belvidere plant would make that new model and the Cherokee.)

It also sounds like the high-tech factory in Sterling Heights, Mich., that currently makes the midsize Chrysler 200 sedan will be the future home of the Grand Wagoneer, along with a related model that Marchionne referred to as the "Wagoneer."

Marchionne hinted that FCA had already begun talking to other automakers about a deal to produce compact and midsize cars for FCA in their factories. (When asked about Marchionne's remarks, Ford (F 2.33%) CEO Mark Fields hinted strongly that he would be open to discussing such a partnership. It's possible those talks are already under way.)

But it sounds like the Dart and 200 won't last beyond next year. The all-new Wrangler is expected to go into production in the fall of 2017 -- meaning production of the Cherokee will have to be up and running by then at the latest. That in turn means 2017 might well be the last year for the Dart in its current form.

As for the 200, FCA's five-year plan called for the Grand Wagoneer to appear in 2018. That suggests it won't be far behind the revised Wrangler, and that in turn suggests the Chrysler 200 won't be "imported from Detroit" for a whole lot longer.

In the short term, that's probably all good news for FCA's bottom line, and for FCA's investors. Marchionne's moves will almost certainly boost the profits generated by FCA's North American factories over the short term. But is Marchionne trading a balanced long-term product strategy for short-term profits? That's a question we won't know the answer to until we know the rest of FCA's product plan.