The stock of retail propane distributor Ferrellgas Partners, L.P. (OTC:FGP) is trading near all-time lows. That's impressive given that its shares have been publicly traded since 1994. How did we get to this point?

It all started when management cut the distribution payment by 80% to focus on cleaning up the balance sheet. The company has maintained a considerable amount of debt for many consecutive years, but things began getting a little out of hand in 2016 after Ferrellgas Partners tried to build out midstream operations. It hasn't gone well.

In fact, summarizing the state of the balance sheet by simply saying "out of hand" may be generous. At the end of the most recent quarter, the company reported shareholders' equity of negative $703 million. That means Ferrellgas Partners has an unbelievable book value of negative $6.50 per share.

Can management dig out of this massive hole? 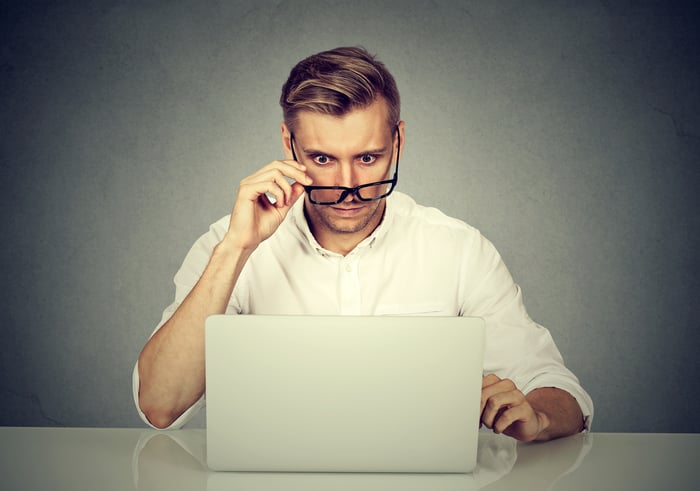 Just to refresh our memories:

Poring through the last 10 years of SEC filings shows that relatively high debt balances have been the norm for Ferrellgas Partners. That means the company's book value has historically hovered around $100 million.

Relatively high debt levels are just the nature of the business: equipment, distribution, and refueling are all expensive pieces of a profitable puzzle. Pulling the trigger on over 235 acquisitions in the last 75 years also helps to keep a company leveraged. Yet, given the tax advantaged partnership structure and the profitability of the business, debt balances haven't usually been a big problem for investors nor the company.

But things are different today. Ferrellgas Partners ended its most recent quarter with nearly $2 billion in long-term debt -- roughly double the balance maintained for most of the last 10 years.

That matters because companies must maintain certain leverage ratios with creditors. The retail propane leader had to negotiate raising its leverage ratio, but now has to borrow at higher interest rates. So, the most reasonable way to climb out of the hole it dug was to slash distribution payments and divert that cash flow to debt payments. Unfortunately, volatile weather in recent periods has impacted operating cash flow at exactly the wrong time. 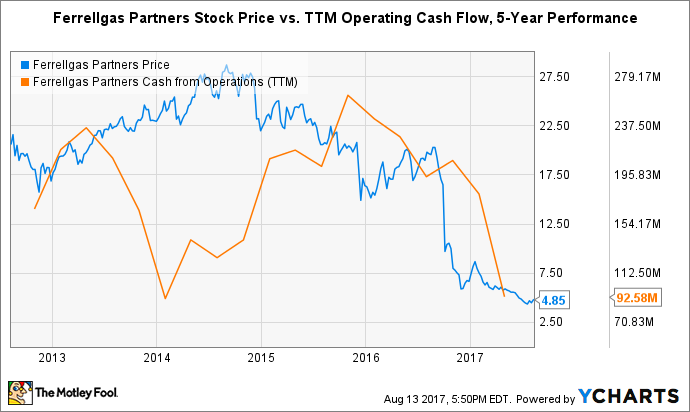 Weather impacts or not, the faster Ferrellgas Partners reduces debt the faster it can increase distribution payments. Can the company pull it off?

Restoring order to the balance sheet

It depends. After blowing past the previous leverage ratio cap of 5.5x management negotiated a new ceiling of 7.75x through April 2018 (the end of the company's fiscal third-quarter 2018). The ultimate goal is to pay down the debt and lower the leverage ratio to 4.5x or lower. At the end of April management reported a leverage ratio of 6.45 times, which means it has both breathing room and quite a ways to go.

Diverting cash flow away from distribution payments and toward debt reduction will go a long way to meeting that goal. But cash flow is ultimately driven by operations, which have been a mixed bag lately. Warmer than expected weather has dragged down the propane business, although midstream operations may begin to improve with the rest of the sector in the quarters ahead. Ironically, the latter segment, which got the company into its current mess, may be the most important driving force to climb out of the current situation.

Overall, operating income is up about 12% through the first nine months of fiscal 2017 compared to the year-ago period. That's promising for the company's debt reduction efforts in the next 12 months. However, Wall Street has lost faith in Ferrellgas Partners stock and will want to see enormous progress before reassessing the company's valuation. Talking about the plan simply won't be enough.