The ability to shake up patient treatment could mean big bucks for Tetraphase Pharmaceuticals (NASDAQ:TTPH), NovoCure (NASDAQ:NVCR), and Exact Sciences (NASDAQ:EXAS). Should you be buying shares in these companies? Read on to learn if they're right for your portfolio.

Back on the right track? Maybe

What happens when a highly anticipated phase 3 study fails to pan out? Shares get crushed. And that's precisely what happened when Tetraphase Pharmaceuticals reported in 2015 that its oral antibiotic, eravacycline, missed the mark as a treatment for urinary tract infection. The shellacking aside, Tetraphase Pharmaceuticals is riding high this year on news that an IV formulation of eravacycline works better. Last fall, results from a phase 3 study showed it wasn't inferior to carbapenem in patients with complicated intra-abdominal infections, and last week, a second phase 3 study showed it's as effective as meropenem in these patients.

This is potentially game-changing news because doctors are struggling to fight infections. Bacteria is evolving that is immune to existing antibiotics, and there's a global push to develop alternative antibiotics that can overcome that resistance. It's especially important to have new treatment options available, because gram-negative pathogens account for over 30% of hospital-acquired infections, and they have a high mortality rate, especially when they're caused by resistant strains.

Tetraphase plans to file for EU approval soon, and management plans on an FDA filing for IV eravacycline in 2018. There's no guarantee that IV eravacycline will get a regulatory OK, or that doctors will commonly use it if it does. However, an approval could provide a welcome source of revenue to the company, which currently doesn't have any products on the market.

Glioblastoma multiforme is a common form of brain cancer with a poor 5-year survival rate. Despite the use of surgery, radiation, and chemotherapy, most patients succumb to their disease. Perhaps that will change thanks to NovoCure's Optune, which uses an entirely new way to fight cancer called tumor treating fields, or TTFields. 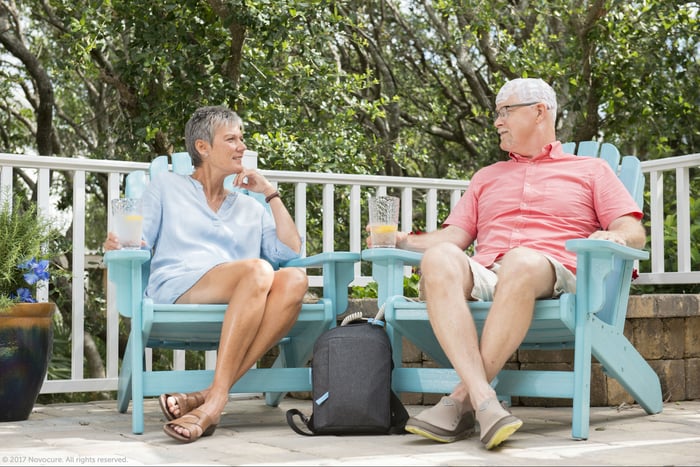 Unlike radiation and chemotherapy, which attempt to kill cancer with toxic payloads, Optune prevents cancer cells from duplicating by delivering a specific frequency to tumors via wearable arrays attached to a portable TTField generator. In clinical trials, 5-year overall survival more than doubled to 13% from 5% in patients using Optune.

The survival data is helping NovoCure overcome pessimistic oncologists trained to use conventional approaches, and management is working hard to make sure patients are wearing Optune as planned. A high-touch customer service approach is boosting patient adherence and that, plus more doctors warming up to TTFields, has led to a 64% increase in patients using Optune. As of June 30, there are 1,460 patients actively being treated with it.

At an all-inclusive price of $21,000 per month, Optune isn't cheap; however, insurers are increasingly covering Optune, and the need for new approaches is big enough to convince even the most skeptical to try it. As a result, management thinks it can achieve profitability solely from Optune's use in brain cancer. In Q2, revenue was $38.4 million, and losses totaled $21.2 million.

Make no mistake, though. Management thinks Optune's opportunity is much bigger than glioblastoma multiforme. Studies are already underway evaluating its use in mesothelioma, pancreatic cancer, and non-small lung cancer. If those studies succeed, then TTFields could become as well-known as radiation and chemotherapy, and that could catapult NovoCure into a position as one of the biggest players in cancer treatment.

Colon cancer is one of the deadliest of cancers, but survival improves dramatically when it's caught early. Unfortunately, about half of Americans who should be screened for colon cancer regularly fail to do so, and that means too many colon cancers are being diagnosed in the later stages, when it's tougher to treat.

Guidelines call for everyone between age 50 to 74 to be on a colon cancer screening "schedule," but many patients are turned off by the cost and preparation required by colonoscopy, which is the gold-standard in colon cancer screening. Recognizing that poor screening rates could lead to thousands of additional colon cancer deaths as baby boomers age, Exact Sciences developed Cologuard, a kit that allows patients to supply a stool sample at home that's then shipped to a lab for evaluation.

Cologuard is more effective at catching colon cancer than other stool sample screening options, and with most insurers now covering it, the cost is a fraction of a colonoscopy. Its advantages are resonating with doctors and consumers, and tens of thousands of new patients are now being screened every quarter who wouldn't have been screened otherwise.

In the second quarter, the company completed 149% more tests than it did in Q2 2016, and that led management to up its full-year forecast for completed tests to 550,000 from 470,000 previously. It also prompted an increase in the company's full-year revenue to a range of between $230 million to $240 million, up from prior guidance for between $195 to $205 million.

Winning over doctors and patients hasn't come cheaply, though, so Exact Sciences is still losing money. It spent over $75 million on sales and marketing in the first six months of 2017 alone, and as a result, its year-to-date losses total $67 million.

The company doesn't plan on slowing its spending on marketing anytime soon, so expenses will continue to drag on the company's bottom line. But the market opportunity for Cologuard is massive, and that has me thinking it's only a matter of time before Exact Sciences is reporting earnings. The company pegs Cologuard's market opportunity at $4 billion, and with testing suggested every three years, a big long-term tailwind supports this company's growth, making it an intriguing stock to buy.