Starbucks Corporation (NASDAQ:SBUX) shares had their biggest one-day loss in two years last month after the coffee chain cut its earnings forecast for the second time this year. The stock gave up 9.2% as investors seemed to think that the company's inexorable growth at home may be coming to an end, especially as traffic has lagged over the last four quarters.

Those concerns increased when BMO Capital Markets issued a downbeat comment on Starbucks last week, arguing that the company was approaching a saturation point in the U.S. BMO downgraded Starbucks to market perform after finding that the average Starbucks location has 3.6 other Starbucks cafes within a one-mile radius.

BMO concluded from that statistic that cannibalization may be occurring as new stores take sales from old ones, which compounds the competition from "third-wave" coffee shops. Analyst Andrew Strelzik sees Starbucks growth slowing because of that concentration.

Starbucks now has more than 13,000 restaurants in the U.S., nearly as many as McDonald's (NYSE:MCD), which has more than 14,000 across the country but saw a net decline in store count last year. Both companies trail Subway -- which has nearly 27,000 locations -- by a significant margin.

While some signs may indicate that Starbucks is approaching its saturation limit, there are reasons to believe its U.S expansion can continue. 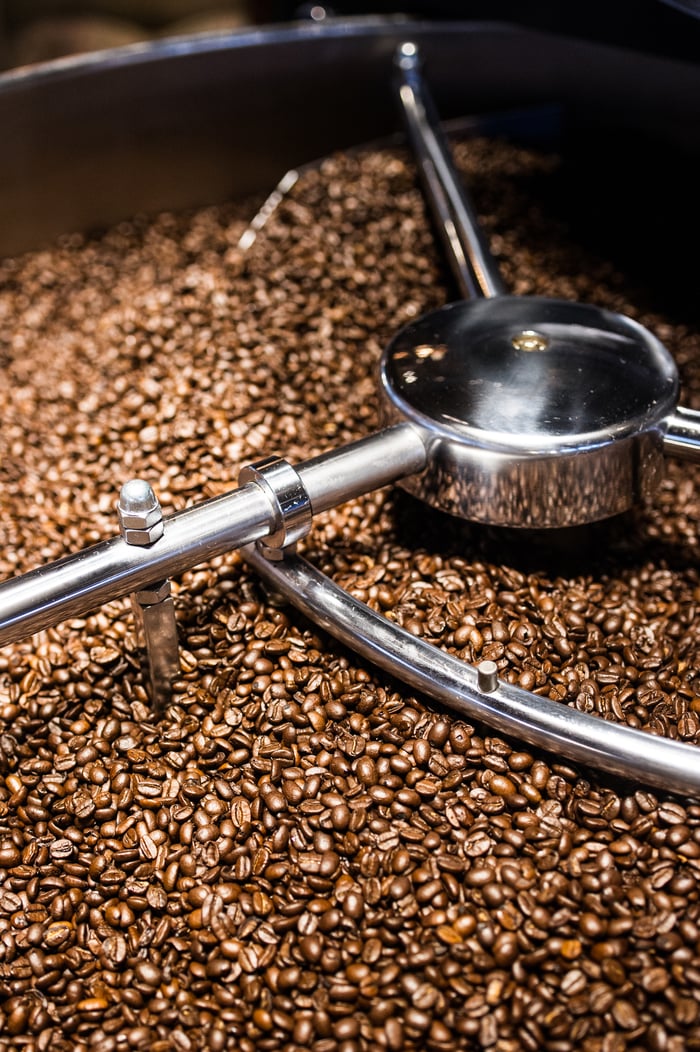 Chairman Howard Schultz has touted Starbucks' new premiumization strategy in a number of recent earnings calls. The strategy includes opening up a handful of Reserve Roasteries, like the one on display in Seattle, across the country, as well as about 1,000 Reserve cafes.

The Roastery has been described as a "Willy Wonka"-like coffee emporium. The 20,000-square-foot copper-ensconced shrine to coffee offers a multisensory experience with at least six brewing techniques available, small-batch coffees, a coffee library, and rare, high-quality roasts. Starbucks has a Roastery under construction in New York and one planned for Chicago and expects to open 20-30 worldwide.

The Reserve cafes, meanwhile, will feature small-batch roasts from the Roasteries, and higher-end store designs that feature wood paneling and comfortable leather furniture.

The expansion of the Roasteries and Reserve Cafes should help Starbucks fend off competition from independent coffee chains and allow it to further penetrate already-concentrated neighborhoods by offering customers a different experience.

Starbucks has built its business largely by targeting white-collar workers and upwardly mobile young people like students. Not surprisingly, the company's cafes are most often found in higher-income neighborhoods and downtown areas.

However, more recently Starbucks has branched out into lower-income neighborhoods and towns such as Ferguson, Missouri, as part of a pledge to open 15 stores in such areas by 2018. However, Starbucks also said the Ferguson location and others like it were among its best-performing new stores of 2016, a sign that the initiative could go well beyond the 15 stores promised.

Rival Dunkin' Brands' (NASDAQ:DNKN) Dunkin' Donuts has often filled the gap left by Starbucks in many of those neighborhoods, indicating an opportunity for Starbucks as Dunkin's prices are similar to the leading coffee chain. For instance, in the Flatbush section of Brooklyn, there are at least 10 Dunkin' Donuts locations, but just two Starbucks, one of which is inside a Target just blocks from the other one.

The success of the Ferguson store and Dunkin's proliferation seems to indicate a sizable market opportunity for Starbucks in such neighborhoods.

Mobile order and pickup and delivery may be Starbucks' biggest stateside opportunities. As demand for convenience has grown so have delivery and mobile ordering options. Starbucks was the first to innovate with mobile order and pickup, and though demand for digital ordering has been hard for Starbucks to keep up with, the company could meet such demand with stores dedicated to pickup and delivery. Pizza delivery companies like Domino's Pizza have thrived with a model that does just that as Domino's has been the best-performing restaurant stock since the recession. For Starbucks, adding locations like its Express stores, which have limited seating and cater to to-go customers could help it support the demand for mobile pickup and delivery, and add new stores in dense markets. Since those stores would need less real estate, they would also be lower cost, even though they could support the same customer base.

Starbucks' focus on coffee, which is often consumed daily, separates it from McDonald's and Subway since it courts a higher-frequency customer and should, therefore, be able to support a greater number of stores. Considering Starbucks still hasn't passed McDonald's, and Subway has double its number of stores, the growth path at home for the coffee giant should be considerably longer than the current conventional wisdom seems to imply.