It's hard to find fault with anything that A.O. Smith (NYSE:AOS) is doing right now. Sales continue to grow revenue at a decent clip, profit margins remain in the 20% range, and the company has some compelling irons in the fire with products that are parallel to its bread-and-butter water heater business. On its most recent conference call, management highlighted where it sees growth coming from -- and where it isn't -- over the next several years.

A.O. Smith made its name as a water heater manufacturer, and it continues to be the largest and most profitable product the company sells. Management has started to branch out, though, with the purchase of water purification treatment manufacturer Aquasana. The business hasn't started off on the best foot with low margins, but CEO Ajita Rajendra has high hopes for the business in the future.

With a full year of Aquasana sales as part of A. O. Smith, we expect our global water treatment product sales will be over $275 million in 2017. 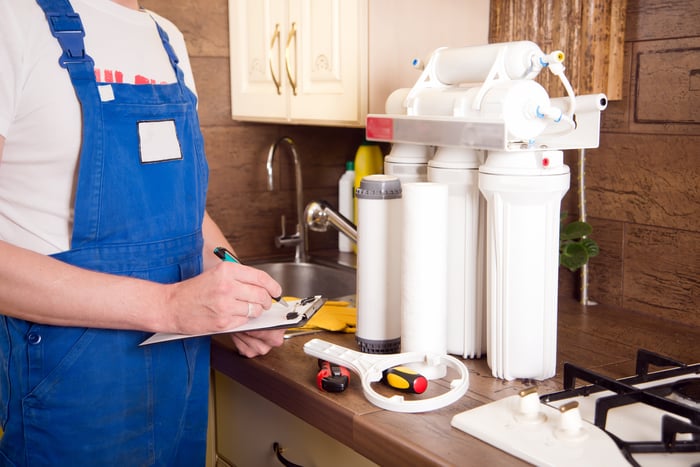 The real driving factor for water treatment sales has been overseas. On top of astronomical growth in water purification systems, A.O. Smith is also finding traction in the air purification system market in China. Over the past several quarters, both water and air purification system sales have grown more than 40% year over year. According to CFO John Kita, the company is planning on spending quite a bit of money over the next 12 months to meet this surging demand.

We broke ground in 2016 on the construction of the new water treatment and air purification manufacturing facility in Nanjing to support the strong growth of these products in China. Our 2017 capital spending plans of approximately $100 million includes $45 million related to this plant.

Total costs for the facility, which is expected to begin production in the second quarter of 2018, will be about $65 million.

Later on in the call, management noted that the extraordinary growth in air purification systems (more than 100% over the past year) should settle back into a mid-teens to 20% growth rate over time. But even if that is the case, it would prove to be an attractive market.

Not benefiting from the Amazon effect

In addition to branded product sales, A.O. Smith also does a sizable business manufacturing products for private labels. One of its larger deals is with Sears Holdings (NASDAQ:SHLDQ) to manufacture under the Kenmore appliance name. Several weeks ago, Sears announced it had reached an agreement with Amazon to sell Kenmore appliances through the online retail giant. This, of course, garnered a lot of attention from analysts wondering of A.O. Smith's products will be part of that deal. Rajendra put the kibosh on that quickly in his opening statement.

When asked if water heaters could be part of this deal down the road, he seemed pessimistic as well.

[I]n most places, a water heater needs a licensed plumber to install it; whereas, a lot of white goods is plug-and-play. So, from a practical perspective, leaving aside the big, bulky, heavy, relatively low-value water heaters, moving these around one at a time just becomes economically not feasible.

Rajendra's reasoning here sounds more like covering up the fact that it isn't part of the deal than not wanting to be part of it. This statement assumes that licensed plumbers won't use Amazon to order Kenmore-branded water heaters, but will use either Sears' online platform or conventional ordering methods. That logic seems dubious at best. Also, it seems a bit strange to say that moving around big heavy water heaters one at a time is not economically feasible when Sears offers free delivery for water heaters on its online ordering site.

Selling water heaters sounds like an incredibly cyclical business that would closely follow the broader housing market. This isn't really the case, however, as 85% of North America water heater sales are replacements of older systems. This stable base of sales gives management a much easier platform from which it can predict future growth. According to Rajendra, management sees growth at current rates going on for some time.

Our total company organic growth model continues to assume 8% growth for the foreseeable future. Especially in these uncertain economic times, we believe our organic growth potential and our stable defensive replacement markets, which we believe represent approximately 85% of North America water heater and boiler volumes, positively differentiates A. O. Smith among other industrial companies.

Coupled with growth and stability, we have a strong balance sheet poised to take advantage of strategic acquisitions that add shareholder value as well as allow us to return cash to shareholders.

An added benefit for shareholders is that A.O. Smith is relatively light on assets for a manufacturing business. Kita mentioned that expansion facility in China, but other than that, the company has relatively little in terms of capital spending. This means management can throw off cash to investors in the form of a steadily growing dividend and declining share count. 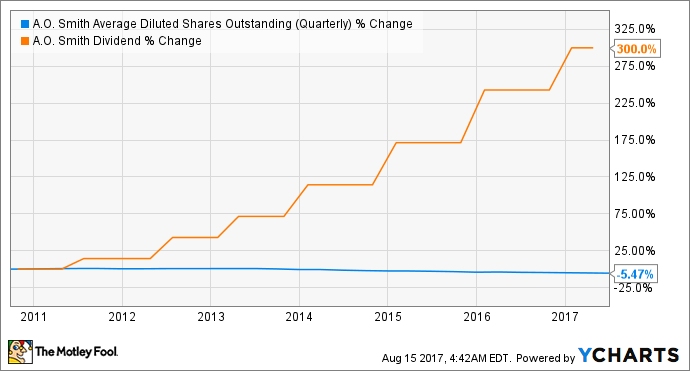 A.O. Smith isn't the most headline-grabbing kind of business strategy, but it's one that has done incredibly well at generating market-beating returns. With its defensive business of selling replacement water heaters and its growth opportunities in foreign markets and parallel products, management seems to be pushing all the right buttons.