Hundreds of millions of people use Twitter (NYSE:TWTR) to keep up on breaking news and follow events in the entertainment, sports, and political arenas. That relevance has helped the company earn a $12 billion valuation.

Below, we'll look at how Twitter generates the revenue that supports this huge business.

It's all about the ads

Twitter makes almost all of its money by selling advertisements -- called promoted posts or promoted stories -- that show up in its users' feeds. Ad revenue was $2.25 billion, accounting for 89% of the company's top line last year. Twitter's data licensing segment accounts for the rest.

In that way, its business model is essentially the same as Facebook's (NASDAQ:FB). Both companies operate in a digital advertising industry that's growing quickly as people consume more media online rather than through television, newspapers, and magazines.

Yet there are major differences that help explain why Facebook's stock has been setting new all-time highs lately while Twitter's is languishing well below its IPO price. The biggest is in the area of reach. Facebook recently passed 2 billion users as its active base jumped 17% year over year. Twitter, on the other hand, counted just 328 million users in late July, unchanged from the prior quarter and up just 5% from the year-ago period.

Facebook also has a much more engaged base of people who post status updates, pictures, and messages. That translates into additional opportunities to show ads and increased engagement on the ads themselves.

In contrast, the combination of a stagnant user base and a slipping grip on the advertising space has pushed Twitter's revenue growth rate into negative territory. That has had a predictably brutal impact on the stock price: 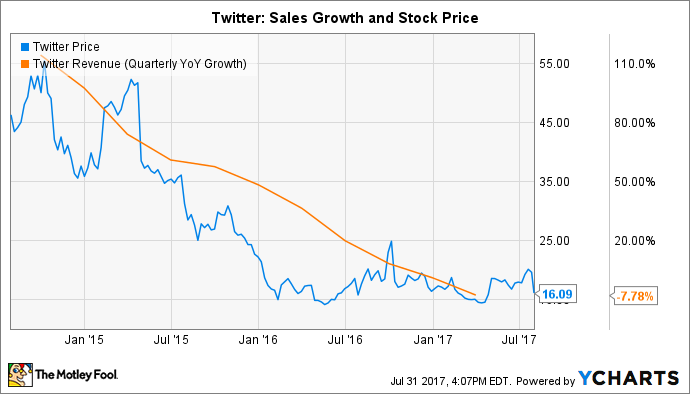 Broadcast in the U.S. market

Twitter has an unusually global user base. In fact, 79% of its active users are located outside of the United States. However, the company is struggling to monetize its service in these markets. They accounted for just 41% of revenue over the past 12 months, with the U.S. segment, and its relatively tiny user base, responsible for the remaining 59%.

Facebook suffers from a monetization gap, too. Its average revenue per user was $4.73 worldwide last quarter, compared to over $19 in just the U.S. geography. Yet the social media king does a better job at profiting from its global base, and has shown increasing ARPU with each passing year.

Like Facebook, Twitter has high hopes for rich media like video and streaming content becoming a critical driver of sales growth over the next few years. To that end, CEO Jack Dorsey and his executive team scaled up their live video events to 1,200 hours last quarter -- or double the total from two quarters before. These concerts and sporting events typically generate engagement spikes and sync up well with the company's brand focus on breaking news.

At the same time, the company aims to make its service more valuable to advertisers by improving Tweet relevance and speeding up video delivery. It has also made progress rooting out abuse from its system but admits there's much more room for improvement here.

Those adjustments will help make the business more efficient. However, the outlook for revenue growth will remain sluggish so long as Twitter's audience stays small, slow-growing, and relatively passive.

How Twitter Inc. Makes Most of Its Money @themotleyfool #stocks $TWTR $FB Next Article
Current