On May 3, chip giant Intel (NASDAQ:INTC) disclosed that then-Data Center Group (DCG) chief Diane Bryant would be going on a leave of absence "to tend to a personal family matter."

In the disclosure, Intel said that this leave of absence would last between six and eight months. 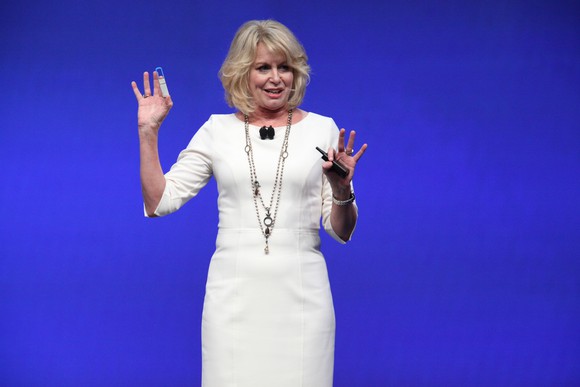 Since Intel's DCG business is the company's highest-priority business, CEO Brian Krzanich said that it wasn't possible to have an "interim leader" for the business while Bryant was away.

"I want to thank Diane for her outstanding leadership and I will announce her next role upon her return," Krzanich said.

According to a recent tweet from IDG News Service reporter Agam Shah, Krzanich may never make that announcement.

Former Intel DCG chief Diane Bryant has been slowly selling @intel stock. I heard she won't return to Intel once leave is over.

The fact that Bryant has been selling off her Intel is neither surprising nor likely indicative of anything; Intel's other top executives have regularly been selling stock, too.

The second part of the tweet -- the bit about Shah hearing that Bryant doesn't plan to come back to Intel -- is by far the more interesting.

Remember: If Bryant returns, she won't be able to assume her old role as DCG chief -- it's Shenoy's job now.

Additionally, there don't appear to be any obvious gaps or imminent retirements in other major segments within the organization.

So, if Bryant were to return, Krzanich would probably have to come up with a new role for her, potentially by adding a layer of management atop the general manager position in a major business unit (similar to what Intel did for Murthy Renduchintala). Not impossible, but it'll certainly be tough to craft a role for Bryant that carries prestige similar to her old role.

There's also the reality that there are many chip companies out there looking to compete directly with Intel's DCG.

It doesn't require a giant leap to think that some, if not most, of those companies would be very interested in bringing Bryant into their organizations to help them with the herculean task of trying to steal Intel's lunch.

Bryant took her leave of absence in early May, so if she is to return as planned, it'd be sometime between early November and early January.

If Bryant isn't back within that window, then it'll probably be safe to assume that Intel couldn't come up with a sufficiently compelling role for her. And then, it'll be interesting to see where she ultimately lands.