Canadian oil sands giant Suncor Energy (NYSE:SU) doesn't get the credit it deserves. The company is on pace to expand output by a 10% compound annual rate per share through 2019. That's remarkable growth for a company of its size and compares favorably to shale drillers, which grab most of the headlines these days because of how fast they can increase output.

That said, when we dig into how Suncor compares to some of the top shale drillers, it becomes evident that the company is actually a better growth stock than that group. Here are two reasons why that's the case. 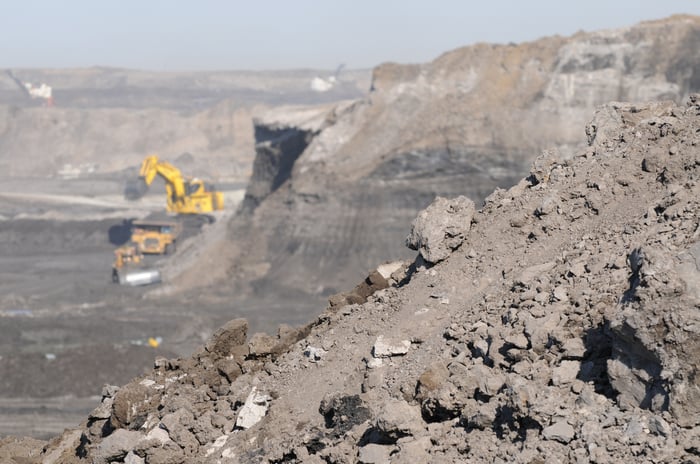 No 1: Suncor doesn't have to work quite as hard

One thing that sets Suncor Energy apart from most shale drillers is its stable production profile due to the nature of oil sands assets. Once Suncor Energy brings an oil sands asset on line, that facility will deliver a relatively steady pace of production for years to come. For example, after taking a year to ramp up, the company's upcoming Fort Hills mine should produce an average of 194,000 barrels per day for the next 50 years.

Contrast this with tight oil wells from shale drillers, which peak within the first year and then decline at a rapid pace after that and often stop producing altogether within a couple of decades. Because of this, shale producers need to continually drill more wells to replace the declining and depleting production of legacy wells.

Because the bulk of Suncor Energy's production consists of low-decline oil sands assets, it has consistently generated free cash flow on every barrel it produces since these assets require minimal capital to keep the oil flowing. Contrast that with leading shale drillers Cimarex Energy (NYSE:XEC), Continental Resources (NYSE:CLR), Pioneer Natural Resources (NYSE:PXD), and EOG Resources (NYSE:EOG), which as the chart on the left-hand side of the following slide shows, have been heavy cash consumers: Suncor Energy's ability to consistently generate excess cash flow has allowed it to continue growing production during the recent oil market downturn -- not to mention paying dividends and buying back stock -- while most of those shale-focused rivals have not. For example, Continental Resources' production fell from 221,715 barrels of oil equivalent per day (BOE/d) in 2015 to 216,912 BOE/d last year because it didn't generate the cash flow needed to drill enough new wells so it could maintain its production rate. Likewise, Cimarex' production fell last year by an average of 2% from 2015's average because it couldn't keep up with the decline rate. Even output at the mighty EOG Resources fell last year, going from 572,200 BOE/d in 2015 to an average rate of 560,000 BOE/d in 2016 due to underinvestment. Of that quartet, only Pioneer Natural Resources managed to boost output last year, though it outspent cash flow to do so.

No 2: There's minimal risk that Suncor won't hit its forecast

Meanwhile, Suncor Energy's ability to generate free cash flow should increase over the next year even if oil prices don't because it's putting the finishing touches on two major growth projects, which should deliver first oil later this year. Once that occurs, those facilities will pivot from cash consumers to cash flow generators as the company begins monetizing the production. Meanwhile, the completion of those two projects will lock in the company's ability to achieve its promised growth rate.

There's minimal risk that Suncor won't hit that target since it's already 90% finished with Fort Hills and recently reached a significant milestone at Hebron. Meanwhile, it has the financial resources to complete both even if oil prices crashed. About the only potential speed bumps are operational issues during the ramp-up of either project or at one of its other facilities.

Contrast that with shale, which carries a higher risk that promised growth won't come to fruition if oil prices fizzle out or if some other issue pops up. For example, Pioneer Natural Resources initially expected that its output would rise 15% to 18% this year. However, after running into a drilling issue last quarter, the company had to defer 30 well completions until 2018, which will cause growth to come in at the low end of its forecast. Furthermore, Pioneer needs oil to average $55 a barrel in the future so it can finance its growth plan while remaining cash flow neutral. As a result, the company might need to cut back on its drilling plans next year to avoid outspending cash flow, which could cause it to grow at less than the 15% compound annual rate it currently anticipates.

EOG Resources, on the other hand, has a more flexible forecast, with the company expecting 15% compound annual oil growth through 2020 at $50 oil and 25% annual growth if crude averages $60. Meanwhile, Continental Resources said that it would not take on any more debt, meaning it will no longer outspend cash flow to chase growth if oil prices fall. Given these issues and forecasts, shale drillers might not grow as fast as anticipated if crude doesn't cooperate.

Locked and loaded and ready to grow

Suncor Energy can grow at a much more consistent pace than shale drillers simply because of the nature of its assets, which have ultra-low decline rates, giving it an easier hurdle to step over. As a result, the company shouldn't have any problems achieving its plan to deliver 10% annual growth per share through 2019 since it has nearly finished the two projects that will push it over the top. That's why investors who are looking for a low-risk oil growth stock should consider Suncor -- its growth is in the bag even if oil prices bounce around.