If you've bought products on e-commerce sites like Amazon (NASDAQ:AMZN) there's a good chance you've bought something that was made in China courtesy of a manufacturer found by using Alibaba (NYSE:BABA). Alibaba's manufacturing might has catapulted its share price significantly higher over the past year and a half, but interestingly, it's far from the market's top performing stock. In fact, Shopify (NYSE:SHOP), Sodastream (NASDAQ:SODA), and Vertex Pharmaceuticals (NASDAQ:VRTX) have all out-performed it. Here's why investors are flocking to shares in these companies, and why their returns may continue besting Alibaba's.

Cash in on the e-commerce gold rush

Dan Caplinger (Shopify): Whenever there's a gold rush, you can count on the companies that provide picks and shovels to produce dependable results regardless of whether their customers strike it rich. In the rush to cash in on internet e-commerce, Alibaba has been a big winner, but Shopify is aiming to make e-commerce easier for businesses of all sizes. 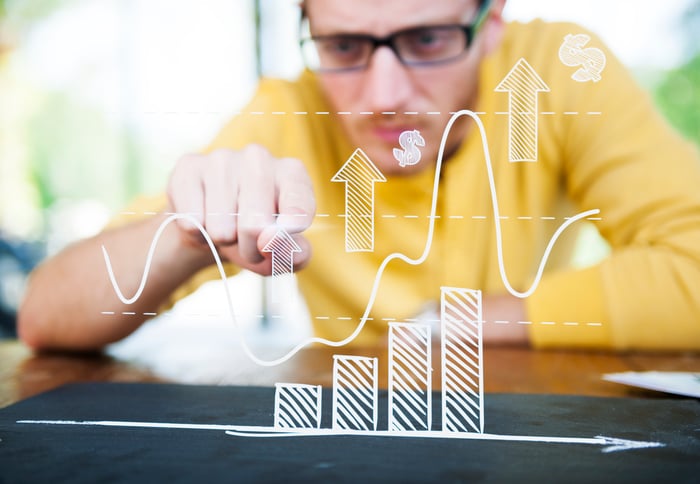 In particular, Shopify provides ways for business owners to set up websites that will attract customers through e-commerce. Once a business acquires a customer, Shopify also makes dealing with orders easier, with an e-commerce solution that accepts credit card payments and offers users a way to track existing orders and respond to customers efficiently. By offering a community for users to share experiences, new users can quickly get up to speed and learn from the knowledge of their peers. Subscription plans are reasonably priced, with different tiers that match up to the needs of businesses of varying sizes.

Already, Shopify has delivered impressive share-price gains, easily outpacing even Alibaba's returns. Yet with a long runway for growth in e-commerce, Shopify has barely begun to tap into the potential of serving clients who don't yet have an online business presence. In time, Alibaba's example could serve to entice business owners to stake their own claim to the e-commerce boom -- and use Shopify to get the picks and shovels they need to succeed.

This rally is no bubble

Yes, the expansion pace has slowed to begin 2017, with sales up 12% through the first six months of the year. But thanks to cost cuts and manufacturing improvements, Sodastream has already generated $29 million of net income to put it on track for annual records both on earnings and profitability.

It's encouraging that the company is gaining market share despite rising selling prices. Sodastream last quarter sold 35% more of its starter machine kits as gross margin jumped to 53% of sales from 51%. Even more exciting is the fact that consumers are demonstrating their loyalty by making consistent repeat purchases. Gas canister refill sales rose 10% in the second quarter to 8.3 million.

Investors should brace for volatility as Sodastream enters the holiday shopping period, which tends to have a disproportionate impact on its annual results. Declining traffic at retailers might pressure 2017 figures or delay inventory purchases until later in the season. On the other hand, Sodastream could outperform expectations given that it is heading into the busy season with its strongest growth trends -- and lowest cost burden -- in years. A successful outing for its latest beverage machines, meanwhile, would again show the wisdom in management's choice to pivot away from soda and into the fast-growing sparkling water industry.

A doubling of its business could be on the horizon 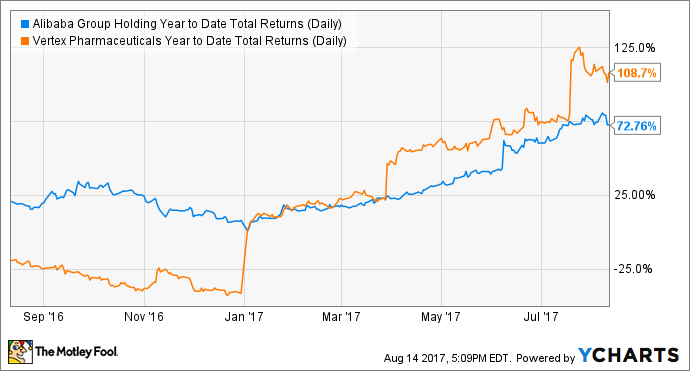 The run-up in its shares is due to increasing use of its cystic fibrosis drugs Kalydeco and Orkambi, as well as positive mid-stage trial data.

Kalydeco and Orkambi's sales were $1.7 billion in 2016, and in the second quarter, sales totaled $514 million, up 24% from Q2, 2016. The quarterly sales run rate is particularly impressive considering that these two drugs only address specific mutations found in about 29,000 of the world's 75,000 cystic fibrosis patients.

Admittedly, Vertex Pharmaceuticals is spending a lot right now on research, and as a result, it's still losing money. But a more than doubling of its addressable market could provide plenty of profit-friendly firepower over the coming years, and that makes this still a top stock to buy.