Wal-Mart Stores, Inc. (NYSE:WMT) has been a household name for more than a generation, ever since the company toppled Sears in the late 1980s to become the nation's largest retailer, and it hasn't looked back since.

Today, it's the world's largest retailer by a wide margin, with nearly $500 billion in revenue. While Americans are very familiar with Wal-Mart at this point, there are more than a few surprising facts about the company that many might find surprising. 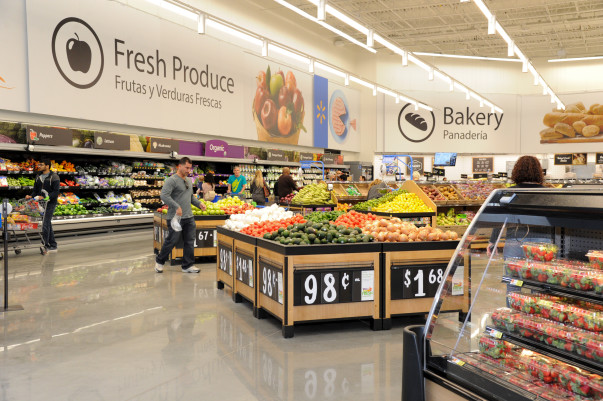 1. Wal-Mart is a champion of solar power

Based in rural Arkansas, Wal-Mart has historically catered to a conservative customer base and embodied conservative values. Its stores have also downplayed alcohol sales, and the company even removed alcohol from Jet.com's offices when it acquired the e-commerce start-up.

It's also long been a bogeyman of labor activists for underpaying workers and using anti-union tactics.

However, Wal-Mart's environmental policies are much more progressive. The company had 142 megawatts of photovoltaic capacity as of 2015, and is striving for 100% renewable energy.

At that point, it was the leading corporate consumer of solar power, but it has since fallen to No. 2 behind Target. Wal-Mart explains that the strategy "lowers our energy costs and is clearly good for the environment, but another benefit is that it keeps prices low for our customers."

2. Bananas are its biggest seller

Groceries make up more than half of Wal-Mart's sales so perhaps it makes sense that the company's biggest seller is the banana, the most popular fruit in the U.S. Bananas are generally known as the cheapest food at the grocery store, which suits Wal-Mart's shoppers who come to its stores for low-priced staples. The retailer sells over 1 billion pounds of the fruit every year, and its success at selling bananas and other groceries has offered something of a moat against e-commerce sellers.

Bananas, which can't be squashed or go below 59 degrees, have proven challenging for grocery home deliveries. One report even described how Amazon Fresh was throwing away thousands of extras because they only sold them in bunches of five.

Last year, Wal-Mart's U.S. stores and Sam's Club together brought in $365.4 billion in revenue, nearly 10% of all non-automotive retail in spending in the U.S. That figure, which does not include spending at restaurants and bars, totaled $3.72 trillion. That Wal-Mart controls nearly 10% of retail spending is evidence of its economies of scale and shows how big of an effect it has on the rest of the economy, including stakeholders like suppliers, employees, and customers.

Not surprisingly, when Wal-Mart raised its wages to $10 an hour last year, a number of its peers followed suit.

Wal-Mart's huge employee base gives it sizable sway over the labor market and has also made it a target of activists and policymakers over the year. It's also the biggest employer in 19 states, including much of the South.

5. 70% of the U.S. population live within five miles of a Walmart

As more evidence of the company's ubiquity, more than two-thirds of Americans live within five miles of a Walmart. Ninety percent live within 15 minutes of one. That ubiquity explains why Wal-Mart has shifted strategies in recent years and scaled back significantly on new store openings. Instead, it is stepping up e-commerce efforts, which include its new grocery pick-up stations, and spending to clean up stores and eliminate stockouts to make its stores more attractive. With a ceiling approaching on its real estate growth, Wal-Mart now must fight for market share with competitors.