Until last year, Cheniere Energy (NYSEMKT:LNG) didn't make any money. That's because the company was still in the development stage since its LNG export facility in Sabine Pass, La., was under construction. However, as that project has moved from development into commercialization, it has taken the company's profits up with it.

Here's a closer look at how the company makes money and what its future holds. 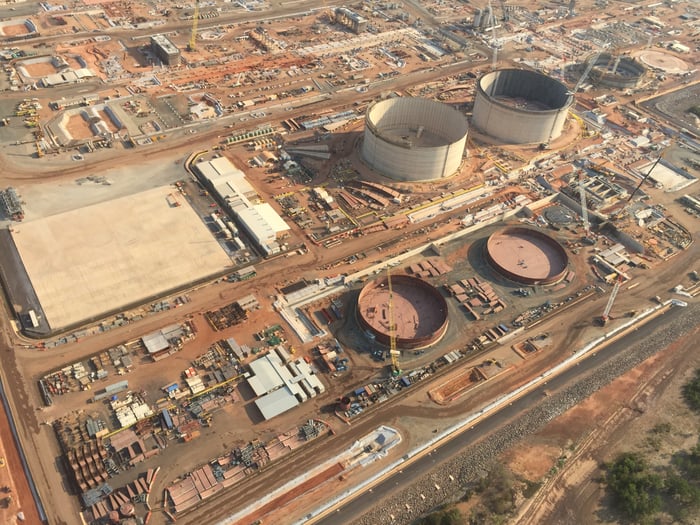 In a nutshell, Cheniere Energy Holdings gets paid a fee for liquefying natural gas at Sabine Pass, which it then loads onto LNG export tankers for customers. Underpinning these payments are long-term contracts that lock in a steady income stream for the company. That revenue stream has risen sharply over the past year as Sabine Pass' first three trains came online and ramped up output: 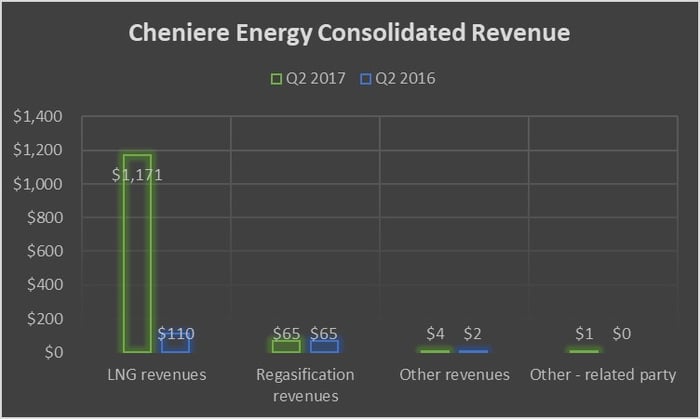 As that chart shows, the bulk of the company's revenue now comes from LNG. These trains not only provided the company with a significant revenue boost, but they've also catapulted it back into the black. During the second quarter, Cheniere recorded $371 million of consolidated adjusted earnings before interest, taxes, depreciation, and amortization (EBITDA), which is a vast improvement from the negative $4 million in consolidated adjusted EBITDA from the year-ago quarter.

That said, Cheniere Energy is just starting to scratch the surface of its profit-making potential. That's because Cheniere Energy Partners just shipped the first LNG cargo out of Train 4 after the quarter ended, giving it one more revenue stream. Overall, those four trains should produce $1.6 billion to $1.8 billion of consolidated adjusted EBITDA this year, which is light-years ahead of the $153.6 million it produced last year. Meanwhile, it has a fifth train under construction that should come online in the second half of 2019 and a fully permitted sixth train waiting in the wings, though it won't start construction on that unit until it secures enough customers to support the investment.

In addition to the embedded growth at Sabine Pass, Cheniere Energy is developing the Corpus Christi Liquefaction Project. Currently, it has two trains under construction that should start producing in 2019 and 2020, respectively. Further, it also has another fully permitted train that it still needs to finish commercializing before commencing construction. Suffice it to say, the company's earnings should grow at a healthy clip given the visibility these additional trains provide, which makes it a potential gold mine for growth investors.

About to become a free cash flow story

Cheniere Energy's LNG export business should generate steadily growing cash flow for years to come since it has 87% of its available capacity locked up under long-term fee-based agreements. In fact, the company estimates that the seven units that are either operational or under construction should generate $6.5 billion in cash for the company by 2021. It only needs about $2.5 billion of that money for debt service and other requirements, which leaves it with a potential $4 billion windfall to pursue additional growth opportunities such as commissioning Train 3 at Corpus Christi or begin returning cash to investors via dividends or buybacks. Either way, if the company allocates that capital wisely, it has the potential to create tremendous value for long-term investors.

How Cheniere Energy, Inc. Makes Most of Its Money @themotleyfool #stocks $LNG $CQP Next Article
Current