And admit that the waters
Around you have grown
And accept it that soon
You'll be drenched to the bone.
If your time to you
Is worth savin'
Then you better start swimmin'
Or you'll sink like a stone
For the times they are a-changin'.

Whenever offshore rig companies release their earnings lately, these Bob Dylan lyrics come to mind. The industry is in a massive state of flux, and those that have tried to hang on to their old business models haven't admitted that their customers have moved on to newer, more capable rigs.

One of the companies that has learned to swim with the changing tide is Ensco (OTC:VAL). The company was able to preserve capital during the downturn and was able to pounce on some attractive assets. Today, though, the company foresees another major change in the way it needs to do business, and management is jockeying to adapt to this new reality. Here are a few quotes from Ensco CEO Carl Trowell that highlight what he and his management team are planning to do in the coming years to make offshore drilling a more vibrant industry. 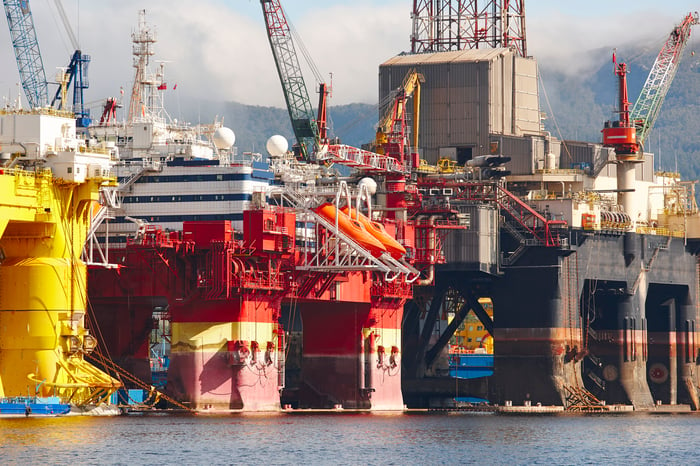 You have Atwood. Now what?

The offshore rig industry has been ripe for consolidation for some time. Too many players in this market were struggling financially, and there were assets out there selling for pennies on the dollar. Ensco was one of the first companies to make a big move by acquiring Atwood Oceanics (NYSE:ATW) back in May. Management had been hinting that a potential acquisition was in the cards for a while before this deal, and the company's balance sheet was more than adequate to handle the current downturn.

Now that the deal is nearing closure, investors may be wondering what's next. Can the company make any more moves? How will the addition of Atwood change the way it approaches its portfolio? On the most recent call, Trowell laid out its path.

Upon closing the transaction, our fleet management strategy will shift in light of the new composition of our rig fleet. First, we will further rationalize legacy Ensco assets and we expect to retire several rigs over the next three years given the refresh that the acquisition will bring to our fleet.

Second, we will be highly selective in reactivating rigs until market conditions and pricing improve after closing, when a new work for Atwood's delivered floaters will be our top priority, so that we position these assets for the eventual market upturn. Third, further enhancements to our floater fleet will be limited.

For those of you who are less familiar with corporate legalese, "rationalizing legacy assets" is a euphemism for "we're going to get rid of some stuff." If you look at Ensco's fleet, you can see why this is a case. The weakest part of the business is its jackup fleet, which is old and much less capable than many of the assets Atwood has. Most of these rigs have been on contracts. As those rigs retire, however, it makes more sense to get rid of them and focus its marketing efforts on keeping its newer rigs active.

We will likely see some similar moves with its floating fleet as well since Atwood has some rigs still under construction and some of the newest rigs on the water today. This will likely mean that Ensco will put off any significant upgrades to its existing fleet since it now has the assets to offer for some of the more complex jobs out there.

How the market will play out from here

It looks like, based on the comments from major oil producers, we have likely hit the bottom of the market for now. With a couple of exceptions, companies are neither cutting spending by extreme amounts, nor are they adding to their capital budgets. This is what Trowell thinks it will mean for rig companies over the next few years.

We expect that the recovery in the offshore sector will be prolonged and paced. Bridging our assets to better market conditions has been the priority over the past year. We expect the active high specification rigs, which can provide efficiencies for customers drilling programs and are operated by drillers with enhanced operational safety systems will be the rigs that win contracts as the market recovers.

As utilization for this subset of global supply improves, we believe these rigs will be the first to see increasing pricing though. More broadly, the market cycle continues to play out as expected. Established offshore drillers are winning a disproportionate amount of new work. And there is a bifurcation among offshore drillers as larger customers are focusing on a selected group of service providers.

Of course, his statement is going to bend toward some of Ensco's advantages (safety, customer service, well financed), but they aren't that out of step with what other rig company execs have said as of late. The companies that will do better than others are the ones with "hot" rigs. These are the rigs that are already working or just recently came off a contract. These assets don't require reactivation costs and producers know from the rigs prior work whether it is reliable. This works to the benefit of a select few players right now and, fortunately, Ensco is one of them.

A new role for offshore drillers?

If the low oil price environment weren't enough of a challenge for the offshore industry, it is compounded by the fact that shale drilling costs so much less today than it did a couple of years ago. Shale is taking some of the offshore industry's portion of capital spending budgets. The only way to gain some of those spending dollars back is to lower costs. Things like standardization of rig design and other offshore equipment has gone a long way, but Trowell foresees a time when companies like Ensco will have to offer more than just a rig.

[T]he future is not going to look like it did in the past and we don't assume that all of the companies that exist in our sector today are going to exist and all the rigs that are working today have been working over the past few years. They are going to work in the future.

You don't have read this comment to know this is happening in the offshore market. There have been a few deals that have suggested the oil services industry would start to offer more integrated service plans. The two biggest moves were when oil service firm Schlumberger (NYSE:SLB) acquired subsea equipment manufacturer Cameron International and when General Electric (NYSE:GE) combined its oil and gas division with Baker Hughes.

These deals are just the beginning. Schlumberger just recently took a stake in newly incorporated rig company Borr Drilling, while Ensco, Diamond Offshore, and Transocean have all recently signed deals with General Electric to incorporate services with some of the equipment on their respective vessels. It's not a stretch of the imagination when rig companies like Ensco start bidding for work in conjunction with these major oil services providers as a way of providing complete package offers to win drilling contracts.

The offshore drilling industry is likely headed for the largest shakeup since we discovered how to drill for oil off our coasts. Ensco thinks that, by acquiring Atwood and by teaming up with General Electric for what it is calling the digital rig, it has the right mix of assets and a means to significantly lower operating costs through better analysis of remote sensing data.

While it's hard to say with any certainty that this is the secret sauce that will lead Ensco back to pre-crash levels, it certainly gives the company a much better chance than some of its less well-capitalized peers that are facing down the barrel of bankruptcy.