One of this year's hottest stocks will need to justify its heady gains next week. Momo (NASDAQ:MOMO) -- the operator of a popular live video broadcasting platform in China -- reports fresh financials next week. The stock has soared 139% so far in 2017, and naturally expectations will be high heading into its second-quarter report on Tuesday morning.

Growth should continue to be explosive for the dot-com darling. Analysts see revenue soaring 189% to hit $286.3 million for the quarter. Wall Street pros also see earnings nearly tripling to $0.31 a share. 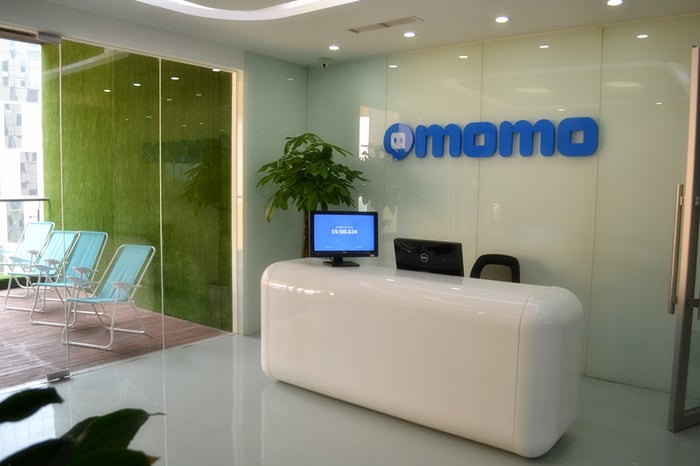 Momo remains one of this year's biggest winners, but trading activity has been surprisingly ho-hum in recent months. The stock has risen by less than 3% since the company put out its first-quarter results three months ago, and that was with revenue soaring 421% and profits growing even faster.

There was a late June hiccup when Chinese regulators started cracking down on online videos and live streaming. China's State Administration of Press, Publication, Radio, Film and Television didn't single out Momo, as it has the required transmission license through a wholly owned subsidiary. However, investors generally get skittish when China starts flexing its powers to curb online platforms.

The good news for investors is that Momo shares are surprisingly cheap on an earnings basis if we look out to the growth that Wall Street pros are forecasting. The stock is trading for 28 times this year's target and a reasonable 20 times next year's analyst estimate. The company is naturally growing at a pace that is many times its earnings multiple, and it wouldn't be outrageous to assume that Momo's bottom-line results could clock in even higher. The company that got its start as an online dating site before discovering its broader calling as a social video speedster with a lucrative virtual gifting niche has consistently blown past analyst profit forecasts over the past year.

Momo has beaten analyst projections by 38% or better in each of its past four quarterly reports. If it earned $0.44 a share the last two periods when Wall Street pros were holding out for earnings per share of $0.30 and $0.32, it's not a stretch to bet on the side of another beat with the estimate perched at just $0.31 this time around.

Trading will likely be volatile on Tuesday. You don't more than double year to date without some heavy expectations going into any financial update. Bears will bet on a correction. Bulls will hope that another blowout report will awaken the stock after its slumber in recent months.