Please ensure Javascript is enabled for purposes of website accessibility
Log In Help Join The Motley Fool
Free Article Join Over 1 Million Premium Members And Get More In-Depth Stock Guidance and Research
By Leo Sun - Jun 13, 2021 at 8:30AM

Momo expects its revenue to fall 4.3% to 6.9% in the second quarter. That fell short of analysts' expectations for a 4% drop, and management didn't provide any bottom-line guidance. 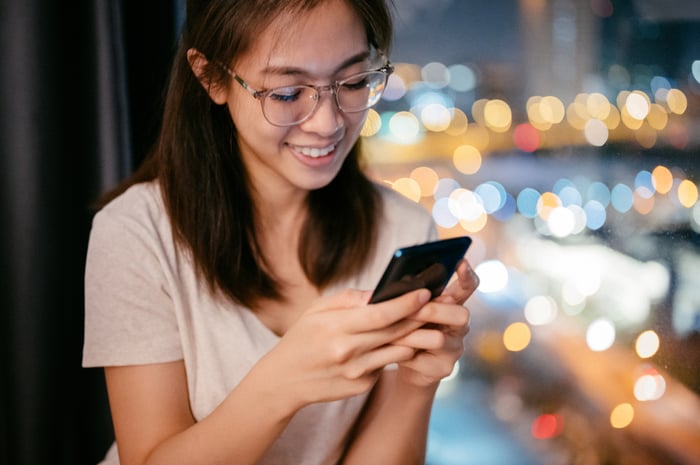 Momo's growth rates look weak, but its stock still advanced after the report, presumably due to its profit beat. The low forward P/E ratio of 7.7 could also be setting a floor under the stock, especially after it has shed 70% of its value over the past three years.

But is Momo stock actually worth buying as a potential turnaround play? Or should investors still swipe left on the so-called "Tinder of China"?

How Momo lost its momentum

A look back at Momo's decelerating growth over the past five years reveals why the stock has crashed.

When Momo went public in late 2014, it generated more than 60% of its revenue from subscription fees on its namesake app. The Momo app enabled users to find friends based on their profiles and locations, and paid users could unlock more features and perks. It wasn't explicitly marketed as a dating app, but it was widely used for that purpose. The rest of its revenue came from ads and a tiny mobile-gaming business.

That all changed in the third quarter of 2015, when Momo launched a live video streaming platform for its core app. The new feature attracted millions of new users who purchased virtual gifts for their favorite broadcasters, and its revenue and earnings growth accelerated significantly throughout 2016.

Momo generated 79% of its revenue from its live streaming business that year, and it continued growing in 2017. But between 2018 and 2020, three major challenges derailed the business.

First, China's live video streaming market became saturated with new competitors, many of which tried to attract top broadcasters with generous revenue-sharing agreements. Second, Chinese regulators, concerned that they couldn't censor live video streams quickly enough, cracked down on the booming industry and banned many broadcasters. That crackdown eventually forced Momo and Tantan, the smaller dating app it acquired in early 2018, to suspend their services for several months in 2019.

Lastly, people spent less money on virtual gifts and premium subscriptions throughout the pandemic last year. At the same time, Momo increased its user acquisition costs for Tantan, which closely resembles Match's Tinder and is clearly promoted as a dating app.

Can Momo make a comeback?

On the bright side, Momo's monthly active users (MAUs) on its main app increased 7% year over year and 1% sequentially to 115.3 million in the first quarter of 2021. During the conference call, CEO Li Wang attributed that growth to a "robust recovery trend" during the Lunar New Year.

However, its total paying users across Momo and Tantan, without counting any overlap, still fell to 12.6 million, compared to 12.8 million in both the previous and prior-year quarters. Within that total, its paid users for Tantan declined 17% year over year and 8% sequentially to 3.5 million.

Wang admitted Tantan was still struggling with the "low efficiency" of its own user acquisition efforts, and streamlining those marketing costs throttled its overall user growth. In other words, Momo's plan to diversify beyond live videos with Tantan hasn't panned out.

Meanwhile, Momo's live streaming revenue fell 16% during the first quarter due to the aforementioned challenges but still accounted for 57% of its top line. That struggling business could continue to offset the growth of Momo's other paid features for the foreseeable future.

It's cheap for obvious reasons

Momo stock might seem like a bargain, but it's cheap because it must overcome such daunting challenges. Analysts expect its revenue to remain nearly flat this year as its adjusted earnings decline 18%, but those dim projections could actually be too optimistic if it continues to lose paying users.

Like many other U.S.-listed Chinese stocks, Momo also faces the threat of delisting in a few years if it doesn't comply with new auditing standards. All of those headwinds mean investors should take a pass on Momo.