A report published on Aug. 18 by DIGITIMES says that Apple (NASDAQ:AAPL) is on track to ship 4.5 million Apple Watch units during the fourth quarter of the year, with shipments for the entire year coming in at 15 million units.

The information, DIGITIMES says, comes from "sources in the upstream supply chain." 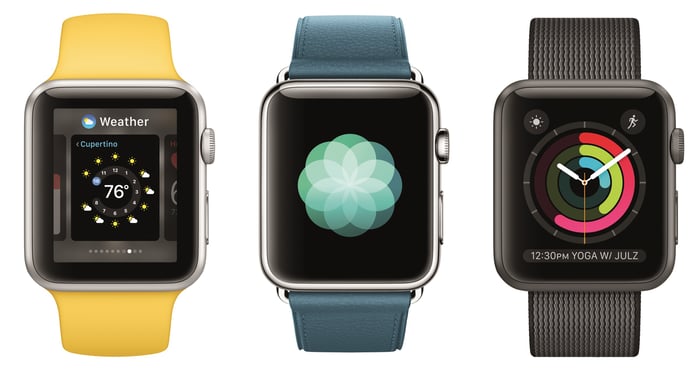 Additionally, those same sources tell DIGITIMES that they expect Apple Watch shipments in 2018 to grow to 20 million units, up 33% year-over-year.

It's not terribly surprising that feature and technology innovations are expected to drive growth, particularly for a product category that's still virtually in its infancy.

At this point, I think it's safe to say that the Apple Watch has been, and continues to be, a success for the company. Apple wasn't first to the smartwatch market by any stretch of the imagination, but it seems to be totally dominating the market.

In fact, the same DIGITIMES article says that although Apple Watch is doing well, Apple's competitors in the space "are seeing weakening demand for their wearable devices."

Notably, the article says that Xiaomi and Fitbit (NYSE:FIT) "are both seeing dropping sales for their smart bands," and that "smartwatch shipments from Samsung Electronics (NASDAQOTH: SSNLF), LG Electronics, Huawei and Motorola remain weak."

Fitbit, which specializes in fitness-oriented smart bands, reported revenue of $353 million last quarter, which was down almost 40% year-over-year. The company appears to be hoping that an entry into the smartwatch market proper (rather than just smart fitness bands) will help reverse its fortunes.

Samsung has been in the smartwatch market for quite some time and has launched several generations of its Galaxy Gear line of smartwatches, though it appears to be enjoying minimal success with these products; per Strategy Analytics, Samsung shipped 2.4 million smartwatches in 2016, down from 2.7 million in 2015.

Though Apple has seen rapid growth in this product category and is set to see solid growth in the coming year, the growth story for Apple Watch is likely far from over.

If Apple can ramp annual shipments to 20 million next year after bringing just three generations of the device to market, then it seems reasonable to be optimistic that there's quite a lot of growth ahead for this product category -- at the very least, for Apple.

As the connectivity capabilities as well as the processing power of the Apple Watch continue to grow -- and there's a lot of work that Apple still must do here -- so too will the uses for the device, which should help further boost adoption.

Further, since there's plenty of room left for Apple to innovate (that's a nice way of saying that the current devices are still rather crude compared to what Apple Watches will look like and be able to do in just a few years), Apple should be able to drive a rather rapid upgrade cycle in the near-to-medium term.

At the end of the day, I wouldn't be surprised to see Apple achieve an annual run rate of 40-50 million Apple Watch shipments per year over the next five years, assuming that Apple continues to invest heavily in the product category in terms of both hardware and software capabilities and ecosystem.