Despite turning profits over the past couple of years in Europe, which followed years of and billions in losses, Ford Motor Company (NYSE:F) is again facing serious headwinds overseas. Brexit impacts are crippling the currency exchange as well as U.K. pricing. Rising commodity costs are also weighing on the bottom line, and launch effects of the all-new Fiesta are hindering its market share. All in all, these headwinds contributed to Ford's $379 million pre-tax profit decline during the second quarter. Unfortunately, a look at Ford's July sales data in Europe shows sales aren't yet rebounding.

Numbers at a glance

Before we get to the major takeaways, let's take a gander at the headline figures. Ford's total vehicle sales slipped 4.8% from the prior year and failed to break 100,000 units during July by a modest 100 vehicles. That weighed on its market share, which dropped 60 basis points down to 7.4% in its traditional 20 European markets (Euro 20). Ford's full year in Europe hasn't been abysmal: Its year-to-date sales are up 2.6% to 845,300 units, which is its best first seven months of the year since 2009 in the Euro 20. However, the Fiesta is an extremely critical product for its total sales, as you can see below. 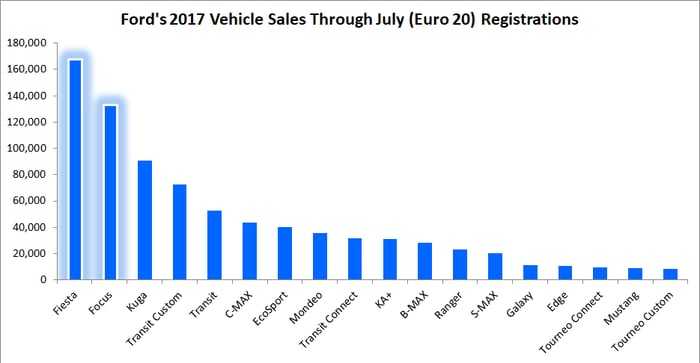 So far this year, the Fiesta has accounted for almost 20% of Ford's total sales, but that figure is likely even a smaller percentage than it would have been if supplies had been sufficient during the all-new model launch. That's apparent in July's sales data, too, as sales of the Fiesta dropped a staggering 43.6% down to 12,400 units. To put it in perspective, Fiesta sales fell by 9,600 units in July compared to Ford's total Euro 20 sales dropping only 5,100 -- had Ford's Fiesta inventory been better supplied, the headline sales figure would be a different story.

When automakers struggle to gain or maintain market share, one way to help offset the pressure that puts on both top and bottom lines is to improve the product sales mix. In Ford's case, that means driving sales of SUVs and premium trims higher, which it's done fairly well. Ford's SUV sales were up 16% in July alone, and are up 27% year to date through July. Ford's Kuga has been a large part of the SUV success, with its sales up 24% through July to more than 90,000 units, its best ever year for that time frame.

SUVs are only one part of the improved sales mix equation. Ford is also selling more of its high-series vehicles. Those vehicles include Titanium trims, Vignale, ST-Line, ST, and RS, and those combine to generate 66% of its passenger-car sales. That doesn't come close to offsetting the damage that a 9.2% sales decline in its passenger car segment does to its top line, but it does help, as those trims will driver higher price tags. 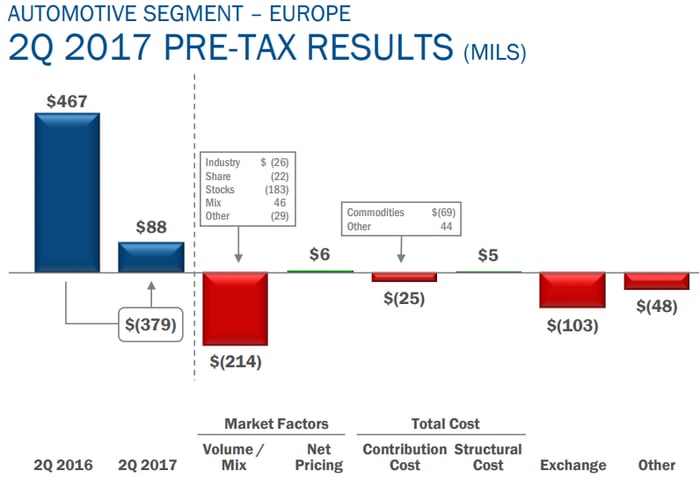 As you can see in the graph above, despite it being a modest $6 million improvement -- albeit up against a strong comparison, as Ford has steadily improved its sales mix for years -- its net pricing was practically the only positive aspect year over year compared to everything else weighing on Ford's European results during the second quarter.

"Despite the summer holiday period, July saw Ford commercial vehicle sales continue to grow by just under 10 percent – a similar rate of growth [to that] they've experienced year to date. With the new Transit Custom and Tourneo Custom people mover available to order later this year, we expect to maintain our strong CV momentum and market leadership into 2018," said Roelant de Waard, vice president of marketing, sales, and service at Ford of Europe, in a press release.

And while many investors pay more attention to Ford's bread-and-butter segments such as SUVs and trucks, its commercial vehicles generated roughly 25% of its sales in Europe last month, which kept Ford as the No. 1 commercial brand in the region.

Ultimately, while Ford faces near-term headwinds in Europe once again, the company remains profitable thanks in part to its growth in commercial vehicles and its improving sales mix. And Ford should be poised to drive total sales higher once its all-new Fiesta production is running at full capacity -- and those are all important takeaways from last month's data.