Ford Motor Company (NYSE:F) said that its sales in Europe fell 4.8% in July, as solid SUV sales once again fell short of offsetting a decline in sales of the Blue Oval's car models, caused in part by tight supplies of the all-new 2018 Fiesta.

Ford sold about 99,900 vehicles in July in the 20 Western and Central European markets that it considers its primary market in Europe (what Ford calls the "Euro 20"). That was down 4.8%, or about 5,100 vehicles, from its total in July 2016. The decline dropped Ford's market share in the region by 80 basis points from a year ago, to 6.4% for the month.

In Europe as a whole, including Russia, Turkey, the former Soviet republics, and the countries of Eastern Europe (what Ford calls the "Euro 50"), Ford sold about 117,500 vehicles in June, roughly flat from a year ago. Ford's market share in the Euro 50 was also flat from its year-ago result, at 7.6%. 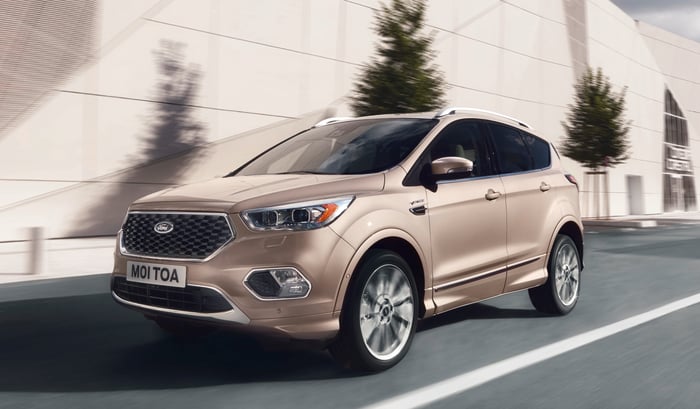 In Europe, Ford's Escape is called the Kuga. Demand has been brisk: Sales were up 24% in July. Image source: Ford Motor Company.

SUVs and trucks have been strong. (Sound familiar?)

Here in the U.S., good sales of Ford's SUVs and trucks are helping to offset a shift in buyer preferences away from traditional sedan models. A similar story is unfolding in Europe, where sales of Ford's crossover SUVs, particularly the smaller ones, have been strong.

Ford's Kuga is the European sibling of the U.S.-market Escape. Like the Escape, the Kuga got a facelift for 2017, and that has probably helped its sales. Euro 20 sales of the Kuga rose about 24% in July from a year ago, to over 12,000 sold. It's now Ford's third-best-selling model in Europe, behind the perennial best-selling Fiesta and Focus.

Ford is also doing well with the EcoSport, a subcompact SUV based on the Fiesta's architecture that was introduced late last year. Ford sold about 4,900 EcoSports in the Euro 20 last month and has sold roughly 40,000 year to date.

The larger Edge completes Ford's SUV lineup in Europe. The Edge is a Ford mainstay in the U.S., but sales are much slower in Europe, as Europeans prefer smaller vehicles. Still, Ford sold about 1,200 Edges in the Euro 20 in July, up about 20% from a year ago.

As in the U.S., the sale of trucks and vans to commercial fleets is an important business for Ford in Europe. It's also going well: Ford sold about 26,600 commercial vehicles (including its Transit vans and Ranger pickups) in July, up 9.7% from a year ago. Ford's 13.3% share of Europe's commercial-vehicle market made it the market leader for July. Ford is rolling out an all-new 2018 Fiesta in Europe. Tight supplies have made a big dent in Ford's overall sales totals. Image source: Ford Motor Company.

But the all-new Fiesta is in short supply, and that's hurting Ford

Again, as in the U.S., sales of Ford's car models in Europe are mostly down -- but one in particular is down a whole lot.

Data source: Ford Motor Company. Sales figures are for the Euro 20, and rounded to the nearest 100 vehicles. The Mondeo is the European twin of the U.S.-market Ford Fusion sedan. The Ka+ is a new model; it debuted in Europe in February 2017. YOY = year over year. N/A = not applicable.

The small Fiesta isn't a big seller in the U.S., but it has long been Ford's most important model in Europe, and one of the Continent's best-sellers for years. Its huge year-over-year sales decline probably isn't due to a Europewide change of heart, but rather -- at least to some extent -- to short supplies.

As Ford CFO Bob Shanks told us last month, Ford is in the process of rolling out an all-new 2018 Fiesta in Europe. Supplies of the all-new Fiesta have been tight as Ford ramps up production.

Shanks told us that limited Fiesta supplies entirely explained Ford's 2.2% decline in Euro 20 sales in the second quarter, and that's probably the story here as well. Note that while Fiesta sales were down about 9,600 units in July, Ford's overall sales in the Euro 20 were down just 5,100.

Long story short: If Fiesta sales had been flat year over year, Ford's overall Europe sales would have been up last month. When will it turn around? Probably in another month or two.