Netflix (NASDAQ:NFLX) may vastly outnumber Amazon.com (NASDAQ:AMZN) when it comes to Emmy nominations -- 91 to 16 for the current competition -- but there's one thing the streaming king lacks that Amazon Studios has in growing abundance: Oscars.

According to Box Office Mojo, the studio's backed films have earned eight Oscar nominations and taken home three statues, all of which were earned last year: original screenplay and best actor for Manchester by the Sea and best foreign-language picture for The Salesman. Betting on high-quality, low-budget independent films can be incredibly lucrative if you're fishing for winners with buzz-worthy potential. Amazon has become as good at finding and funding these sorts of properties as Netflix has been when it comes to TV originals.

Does this really matter if you're an investor? Actually, yes, for two reasons. First, because Amazon Studios is a hook into the overall Amazon platform. Second, Walt Disney is just the latest studio brand to create its own streaming service for delivering content over the top of both Netflix and Amazon. Backing films that not only earn at the box office and on-demand but also fuel ongoing engagement is essential to Amazon Studios' long-term growth and ability to produce profits for the e-tailer. 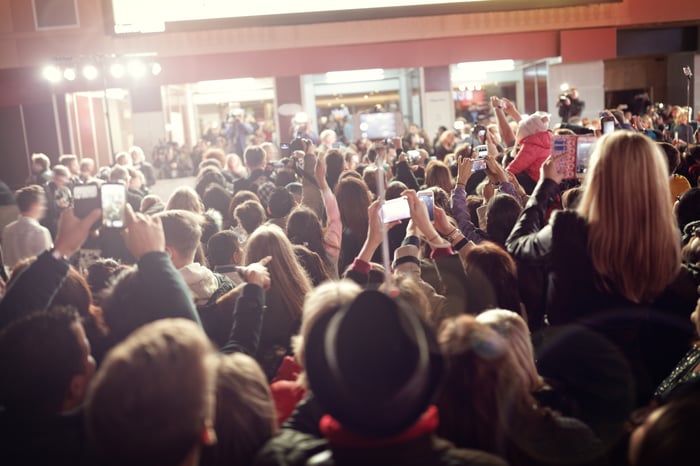 Amazon Studios is finding success in the movie market at a level Netflix hasn't yet achieved. Image source: Getty Images.

Let's take a recent hit, The Big Sick, as an example for how Amazon Studios picks and finances its winners.

Starring comedian Kumail Nanjiani in a story that reflects the real-life circumstances of his relationship with wife Emily V. Gordon, the pair wrote and did most of the work developing the project with Judd Apatow and producing partner Barry Mendel. FilmNation provided funding, which you need to get cameras, sets, and all the other goodness that goes into making a film. Principal photography began in May of last year, and the film screened to buyers at January's Sundance Film Festival. Amazon beat all bidders with a $12 million offer, Deadline reports.

Notice the pattern here. Amazon didn't take the upfront risk but instead waited to see the finished product before buying out FilmNation. What other rights Amazon secured as part of the deal isn't clear at the moment but a distribution relationship with Lions Gate Entertainment means the e-tailer likely limited the bulk of spending to acquiring the closest thing you can get to a proven product in the independent film business. (Distributors pay to put films in theaters and market their release.)

And it's played out pretty well so far. According to Box Office Mojo, The Big Sick has generated an estimated $40.4 million in global grosses a month after its "wide" (i.e., to all theaters) release on July 14. Nanjiani is getting his share of Oscar buzz as a result.

What makes this strategy interesting is that Amazon is generating enough interest in its entertainment portfolio that video subscriptions rose after the e-tailer unbundled it from Prime. Enthusiasts willing to pay $8.99 monthly can get their fill of Oscar-winning films and original series without any of the ancillary add-ons that come with the annual fee regular Prime members pay.

According to eMarketer, Amazon was on track to end 2016 with 76.2 million users, up 16.5%. Presuming that's a reasonably accurate forecast and the figure represents a global total, Amazon is closing in on Netflix in terms of its streaming footprint. The streaming king reported 99.04 million paid memberships worldwide at the end of the second quarter.

"Amazon's growth in digital video viewers is driven by three factors: the success of its Fire TV streaming devices, the roll-out of a stand-alone streaming video service, and its increased investment in original content, which the Boston Consulting Group estimates at $3.2 billion this year, second only to Netflix among video platforms," analyst Paul Verna said in a note published by eMarketer.

Less knowable is whether Amazon's video business can keep growing as it has. But does it matter? Even if only 38 million -- or half -- of the video installed base was willing to pay $8.99 monthly for subscription access, that would still result in just over $4 billion in annual revenue. Double it to cover all 76 million subscriptions, and suddenly you've an $8 billion business before any contributions from the box office and licensing. Netflix has generated $10.2 billion in worldwide revenue over the trailing 12 months.

That's not much distance between these two, and with its apparent savvy choosing Oscar-worthy projects, Amazon Studios may be closing the gap faster than any of us think.