Core Labs (NYSE:CLB) is a different kind of oil-field service company. It is the leading provider of proprietary and patented reservoir description and production enhancement services, which are data-driven technologies that help energy companies maximize the recovery of oil and gas from underground reservoirs. These services are quite lucrative, even in the current low oil price environment, and have enabled Core to remain profitable through the recent market downturn.

Here's a look at how the company makes money and why that sets it apart from other service providers.

Core Labs has two operating segments: Reservoir description and production enhancement. The following chart shows how each has performed so far in 2017: 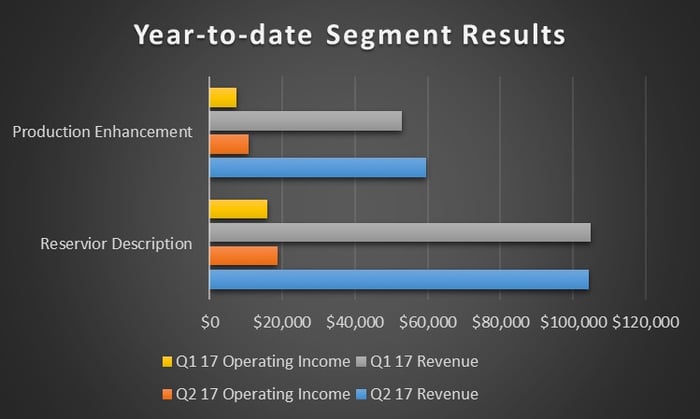 As the table shows, the reservoir description segment is by far Core's biggest money maker, providing nearly double the revenue and earnings as production enhancement in each of the past two quarters.

In this segment, Core Labs helps oil and gas companies understand the reservoir rocks and fluids present in their producing fields. It does this by analyzing rock core samples in its laboratories (hence the name Core Labs), which will help it determine the best way for producers to get the most oil and gas out of the field. Customers pay the company for providing these analysis-based services that enable them to get the most out of their producing fields.

The bulk of this work occurs offshore or in international locations. For example, in the Gulf of Mexico, the company studies reservoir fluids and temperatures and uses the data to help producers maximize daily production and the recovery of oil and gas from the field. It also undertakes rock property and fluid studies to help companies understand the magnitude of a potential discovery. For example, Core is providing advanced rock property studies and extensive reservoir fluid testing on appraisal wells for the Liza discovery offshore Guyana for ExxonMobil and Hess. These tests have helped confirm that ExxonMobil and Hess have uncovered a world-class field.

Another service the company provides is helping oil producers with the development of enhanced oil recovery (EOR) projects by using data to understand the best way to get more oil out of a field. For example, last quarter the company secured enough support to initiate a joint industry project in the Eagle Ford Shale to study reservoir core samples and fluids that will help determine the techniques that would be most effective in increasing recoveries from that unconventional field. 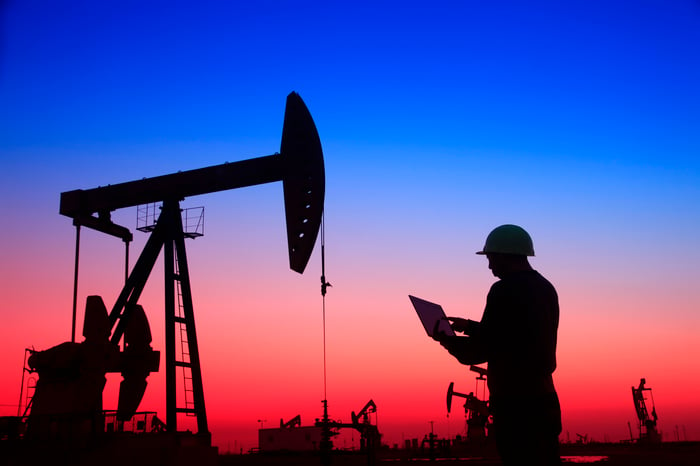 Drilling for data instead of oil

Given the analytical nature of Core Labs' services, it earns high margins on the revenue it pulls in from customers. Last quarter, for example, the company collected $104.3 million in sales from reservoir description services and earned $18.7 million of operating income, which yielded an operating margin of 18%. That was a 160 basis point improvement from the prior quarter because its customers requested "higher technology, higher margins services."

To put those margins into perspective, oil-field service giant Halliburton's (NYSE:HAL) operating margin was 13% in its completion and production segment last quarter and 7% in its drilling and evaluation segment. Meanwhile, industry-leader Schlumberger's (NYSE:SLB) pre-tax operating margin was 12.7% last quarter, up from 11% in the prior quarter. While both Halliburton and Schlumberger provide some similar services to Core Labs, the bulk of their revenue comes from labor and capital intense drilling and well completion services, which squeezes margins. For example, Schlumberger's reservoir characterization group, which provides similar services to Core Labs, boasted 17% pre-tax operating margins last quarter. However, margins in its production group were only 8.9% while those from the drilling group were 14.3%, which pulled companywide margins lower.

The free cash flow machine is just ramping back up

Because Core Labs earns such high margins on its services, the company remained profitable throughout the oil market downturn, even though its revenue declined along with industry activity levels. That said, with production on the rise, it's taking Core's sales and earnings up with it, which should supply the company with even more free cash flow. Furthermore, with a minimal need for that money given the capital-light nature of its business, the company intends to use the bulk of it on share repurchases, which has the potential to supercharge returns for shareholders as the oil market recovery takes hold.