Risky stocks and retirees don't mix. But growth stocks aren't necessarily risky. They tend to be more expensive, relative to earnings, than their slower-growing peers, but that doesn't mean they can't be a good value.

We asked three of our Foolish investors to each discuss a growth stock that would be well suited for a retiree's portfolio. Here's why Alphabet (NASDAQ:GOOG), Legg Mason (NYSE:LM), and Celgene (NASDAQ:CELG) are growth stocks to consider. 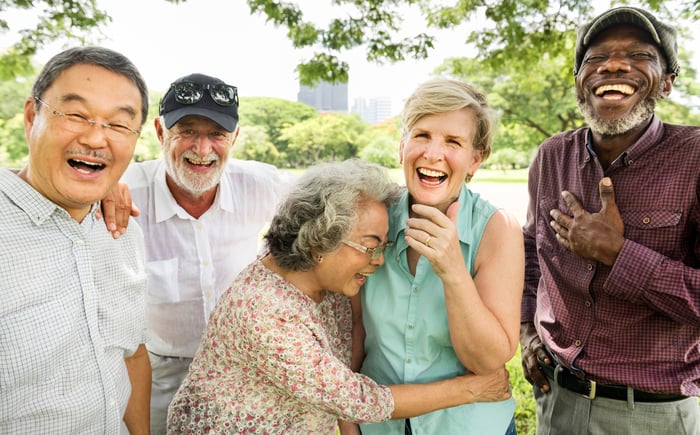 Tim Green (Alphabet): There is no company quite like Alphabet. The company produces nearly $100 billion of revenue annually, and yet it's still growing incredibly fast. During the second quarter, Alphabet grew revenue by 21% year over year. Almost all of that revenue comes from advertising, with the Google search engine completely dominant, and with Android installed on billions of devices.

Alphabet looks unassailable, something that should appeal to retirees looking to invest in a dominant company that has a good chance of staying dominant. There are risks, of course. Facebook is quickly catching up to Google in online advertising. Also, the possibility, however remote, that serious antitrust action is taken against the company the future can't be ignored. Alphabet's $2.7 billion antitrust-related fine in the European Union earlier this year could be just the beginning.

But what you get with Alphabet is a dominant online advertising business coupled with the chance that one of its "moonshots" becomes the next big thing. The most prominent is Waymo, Alphabet's self-driving car subsidiary. It's unclear exactly when self-driving cars will go mainstream, but Alphabet is aiming to be the driving force behind this revolutionary technology.

Retirees won't get a dividend with Alphabet, at least for now. But there may be no larger moat in the technology industry.

Rich Smith: (Legg Mason): What should a retiree be looking for in a growth stock? Well obviously, first of all, growth. But a reasonable valuation and a steady dividend -- at least something better than the rate you can earn more or less risk free in a bank -- also seem like reasonable targets to shoot for.

I think asset manager Legg Mason delivers all of these attributes in spades.

One of the world's largest asset managers, and with a business devoted solely to managing money, Legg Mason is responsible for managing $753 billion worth of investments for its clients. Now, the "rule of thumb" for valuing asset management firms is that a market cap of 2% of assets under management is generally considered fair value for such stocks. At that valuation, you'd expect Legg Mason stock to sell for more than $15 billion, right? Yet right now, the entire company costs less than $3.6 billion, which seems to imply a pretty steep discount to intrinsic value and suggests that Legg Mason may not be a very good stock.

In fact, though, Legg Mason is a pretty good stock. Profitable, with a 17.5% operating profit margin and better than a 10% net margin, Legg Mason stock sells for only 17.2 times trailing earnings. And according to analysts polled by S&P Global Market Intelligence, Legg Mason is growing its earnings at about 15% annually -- more than 50% faster than the average stock on the S&P 500. Dividend wise, Legg Mason pays nearly 3% annually, which isn't just better than a bank will pay you, but nearly 50% more than the average dividend on the S&P.

Moreover, add that dividend to the growth rate, and you come up with an 18% expected return on Legg Mason stock from today's prices and a total return ratio of less than 1.0. In my book, this makes Legg Mason not just a good growth stock for retirees, but a good bargain to boot.

George Budwell (Celgene Corp.): Growth stocks rarely come with the type of strong economic moat that's essential for retired investors, but that's where the top biotech Celgene stands apart from the crowd. Celgene is a cancer and inflammatory disease specialist that has generated double-digit bottom- and top-line growth for several years running. Most importantly, though, this superb growth trend is showing no signs of slowing down.

If you're unfamiliar with this stock, the cliff notes version of the story is that Celgene has built a dominant position in the high-value blood cancer market by repeatedly expanding the label of its flagship medication Revlimid. The company, in turn, has used its ample free cash flows from its successful blood cancer franchise to venture into other high-growth disease markets -- such as psoriatic arthritis with the newly-minted blockbuster Otezla, and multiple sclerosis drug with the late-stage medicine ozanimod.

The key point is that Celgene is among the best in the business when it comes to identifying novel growth opportunities and bringing products to market to take advantage of those opportunities. As proof, this top biotech presently has multiple blockbuster products under its roof and sports one of the most valuable late-stage clinical pipelines, as well.

All told, Celgene is arguably a great pick for retired investors because of its proven ability to consistently churn out both high-value medicines and line extensions for drugs already on the market.