With the market still near all-time highs, finding quality dividend stocks that aren't overpriced is a real challenge. One strategy is to look for a good company going through a rough patch, buy it at a low price, and lock in a nice dividend. This strategy isn't without risk, but I'd argue it makes more sense than paying an arm and a leg for expensive dividend stocks.

International Business Machines (NYSE:IBM), Target (NYSE:TGT), and American Eagle (NYSE:AEO) all trade at pessimistic valuations, and they all sport dividend yields in excess of 4%. Here's why investors should consider these three beaten-down dividend stocks. 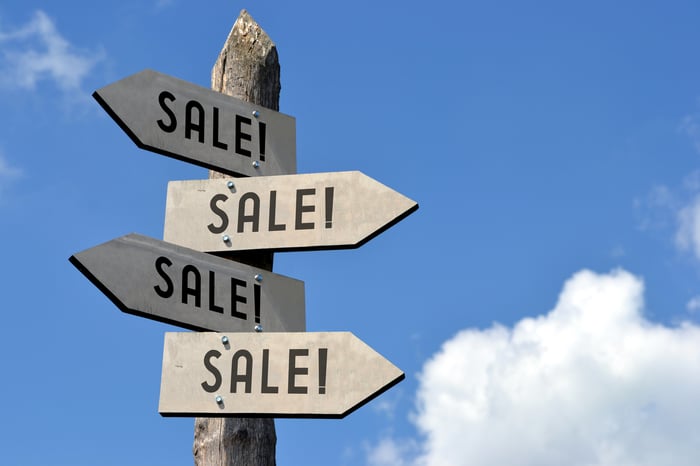 A post-earnings slump may end up being a gift for dividend investors. IBM reported disappointing second-quarter results in July, beating earnings estimates but coming up short on revenue. The company's multiyear turnaround, which looked like it was picking up steam earlier this year, appears far from over, with revenue still in decline. Shares of IBM are down about 22% since topping out earlier this year.

This sell-off has boosted IBM's dividend yield up to 4.3%, making it one of the highest-yielding tech giants. Along with that dividend, investors buying the stock today are getting what looks like a great deal, assuming IBM eventually returns to growth. The stock trades for around $140 per share, just 10 times IBM's guidance of "at least $13.80" in adjusted earnings per share for 2017.

IBM faces the challenge of transforming itself within a technological landscape that's changing faster than ever. Cloud computing has forced the company to adapt, with an increasing number of companies opting to run workloads in the cloud. IBM, long a systems integrator for its customers, is becoming more of a cloud services integrator. At the same time, emerging technologies like artificial intelligence and blockchain have the potential to again upend the technology industry. IBM is investing in both of these areas, but so is nearly every other tech giant on the planet.

IBM is playing the long game, and a single bad quarter doesn't mean the turnaround is derailed. The company has a lot going for it, including a vast customer base that makes scoring major deals, like this $1.7 billion cloud services deal, much easier. For dividend investors willing to give IBM more time to return to growth, the stock looks like a great deal.

There's an awful lot of uncertainty in the retail business these days. A combination of store overbuilding and pressure from e-commerce is testing just about every retailer. Retail bankruptcies are on the rise, and many retailers are aggressively closing stores in an effort to avoid the fate of their failed peers.

Target is a Dividend Aristocrat, having raised its dividend annually for nearly 50 years. That's an impressive streak, and it should give investors some confidence that the company can work through the current upheaval in retail while continuing to pay a dividend. Target stock currently yields about 4.4%, and the stock trades for just 12.5 times the average analyst estimate for full-year earnings.

In the same way that one bad quarter for IBM doesn't spell disaster, one good quarter for Target doesn't mean it's out of the woods. The battle for retail dollars is only going to get more intense. Amazon and Wal-Mart are going toe to toe, with the former entering the brick-and-mortar business with its acquisition of Whole Foods, and the latter aggressively growing its e-commerce business, reporting 60% sales growth during the past two quarters.

Target's transformation has just begun, and the jury's still out on whether the company can truly thrive in the age of e-commerce. But for investors willing to bet on a retailer with a long track record of success, and get paid 4.4% as they wait, Target stock looks enticing.

Let's be clear: Investing in a small apparel retailer, given what's going on in the industry, is risky. Amazon is pushing hard into apparel, malls are dying, and competition is fierce. But some apparel retailers look better than others. American Eagle, for example, has managed to grow comparable sales in recent quarters, no small feat in the current retail environment. The company is reporting its second-quarter results tomorrow, so the story may change. But American Eagle is so far holding up better than most.

During the first quarter, comparable sales rose 2%. The bottom line did decline, driven by increased promotional activity and higher shipping costs in the digital business, and I would expect further declines going forward. But the company is still solidly profitable. Analysts expect American Eagle to produce per-share earnings of $1.09 this year, putting the P/E ratio at just 10.

American Eagle also pays a nice dividend, with the yield currently sitting at about 4.6%. The dividend looks safe for now, with a payout ratio below 50%, but there's always the chance of a dividend cut if profits take a dive. And dividend growth will be sluggish at best until earnings start growing again. One positive: American Eagle's balance sheet is strong, with $225 million of cash and no debt. That gives the company some room for error.

If you're a dividend investor willing to take on some risk, American Eagle could be for you.